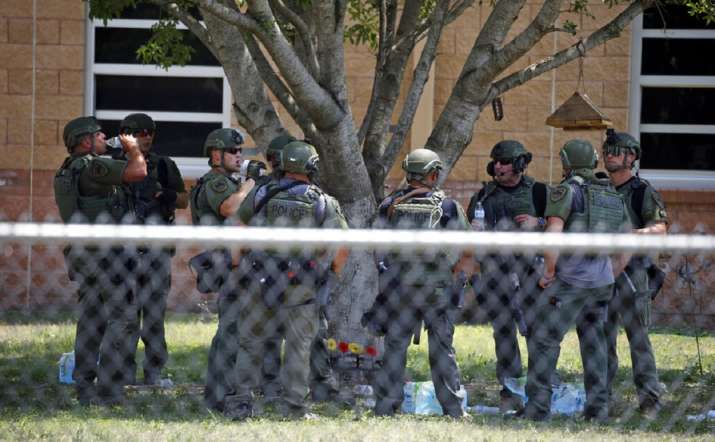 As many as 18 children were killed after a gunman opened fire at a Texas elementary school on Tuesday. According to an official, the death toll also included three adults. The 18-year-old gunman was also reported killed following the attack. The attack comes 10 days after a gunman killed 10 shoppers and workers at a supermarket in Buffalo, New York, in what authorities said was a racist attack.

Authorities said the gunman entered Robb Elementary School in Uvalde with a handgun and possibly a rifle. Officials did not immediately reveal the motive, but the assailant was identified as Salvador Ramos, a resident of the heavily Latino community about 85 miles (135 kilometers) west of San Antonio.

A law enforcement official said the gunman was shot dead by a border patrol agent who was in the vicinity when the shooting began. He rushed inside the school without waiting for backup and shot and killed the gunman, who was behind a barricade.

The patrol agent was wounded but able to walk out of the school, the law enforcement source said.

The number of injured locals in the incident was not immediately known.

Biden says ‘we have to act’ after Texas school shooting

Delivering an emotional call for new restrictions on firearms, US President Joe Biden said, “When in God’s name are we going to stand up to the gun lobby?”

Biden’s address at the White House came shortly after returning from a five-day trip to Asia.

With first lady Jill Biden standing by his side in the Roosevelt Room, Biden added, “I am sick and tired. We have to act.”

“These kinds of mass shootings rarely happen anywhere else in the world,” Biden said. “Why?”

He directed that American flags be flown at half-staff through sunset Saturday in honor of the victims in Texas.

Just two days before Biden left on his trip, he met with victims’ families following a shooting incident at Buffalo supermarket in New York.

The back-to-back tragedies served as sobering reminders of the frequency and brutality of an American epidemic of mass gun violence.