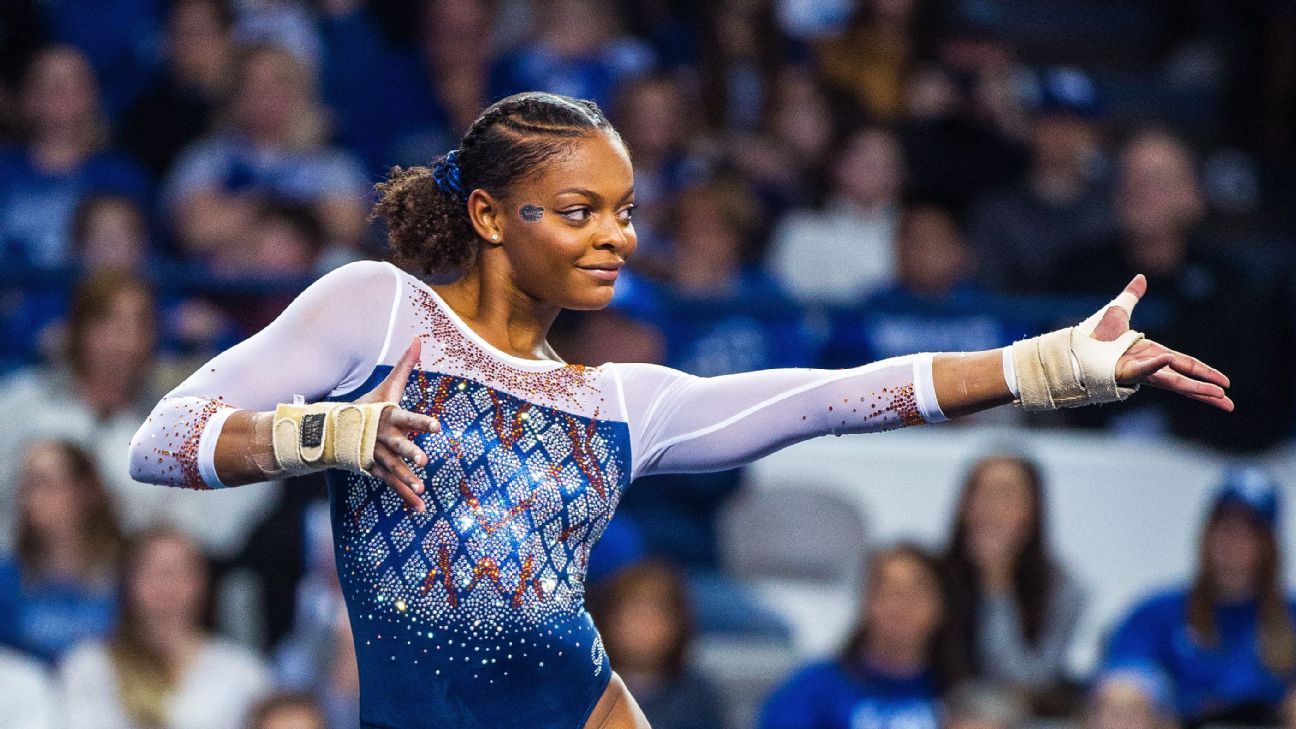 After the coronavirus pandemic brought a premature end to the 2020 NCAA gymnastics season, and with it the conclusion of the collegiate careers of many of the sport’s biggest names, it has been a long 10 months filled with uncertainty about the upcoming campaign.

Our coverage of the NCAA gymnastics season kicks off Friday, Jan. 8, with four meets on the SEC Network, ESPNU and the ESPN App. Watch

Now, we are at the start of the 2021 season. While several teams have yet to announce their full schedules and questions remain about how the season will play out, we do know there are some exceptionally talented gymnasts ready to compete.

No one can replace Oklahoma’s Maggie Nichols or UCLA’s Kyla Ross, but these gymnasts will try to step into the spotlight.

Thomas is the only NCAA gymnast currently on the U.S. national team and she left little doubt as to why during her remarkable 2020 campaign.

She earned a perfect score on four occasions (twice on beam, once each on floor and bars) and was the only collegiate gymnast to do so on three different events in 2020, she tied the Florida record with a 39.825 score in the all-around and she was one of just three to earn the maximum of five All-American honors. She finished the season ranked No. 1 on floor, No. 2 in the all-around and on beam and No. 4 on bars.

Now two years into her collegiate career, and with her biggest competitors in Nichols and Ross having graduated, the Trinity Thomas Era is officially upon us. And as the Gators go into the season as the top-ranked team in the country, it could be really, really fun to watch.

Dennis nearly broke the internet last season with her Beyoncé “Homecoming-“inspired floor routine. After earning a 9.975 on the event against Utah in February, the clip from the meet garnered more than 20 million views on YouTube and earned her a spot on “The Ellen DeGeneres Show.”

To quote Stefan from “Saturday Night Live,” this routine had everything. Dennis air-spelled her name, flipped her hair, (rightfully) placed a crown atop her head, hit the “Whoa” and — oh yeah — did a front layout to double tuck as her opening pass. Her flawless tumbling combined with her infectious energy made her the gymnast to watch going into the postseason and a contender for the event at nationals. Of course, it wasn’t to be, but now entering her final collegiate season, and with the loss of last year’s heavily decorated senior class, this is Dennis’ team now. Having scored at least a 9.95 on every apparatus during her career, she should be a factor on each event, as well in the all-around at every meet for the No. 7 Bruins.

It’s hard to believe Johnson has yet to complete a full season of NCAA gymnastics considering what she has already accomplished. During her abbreviated freshman year, she won the all-around competition in six of the nine meets she competed in, nabbed 22 event titles overall, earned two perfect 10.0 scores (on vault and beam), and became the ninth gymnast in LSU history to earn a score of 9.95 or higher on all four events. Did we mention that was just her freshman season?

She ended the year ranked No. 2 on floor, No. 4 on vault and No. 6 in the all-around, and a frontrunner for every event going into the postseason. She didn’t get the chance to prove herself at NCAAs, but expect her to do just that this season with the No. 3 Tigers and further cement her place as one of the best gymnasts at the college level.

For the first three years of her career at Oklahoma, Webb was in the shadow of her famous teammates Nichols and Brenna Dowell. But she quietly emerged as one of the best gymnasts competing on the college scene with her artistry and consistency on all four events.

Finishing the 2020 season ranked second nationally on vault and No. 5 in the all-around, Webb now will be the face of the Sooners program and should finally get the recognition she deserves. Having earned a perfect 10.0 score on beam during her freshman season in a meet against rival UCLA, she has proven more than capable of being able to step up when her team needs her most.

Résumé: 2019 NCAA runner-up in the all-around and on bars; 13-time All-American including 2020 first team for all-around, bars and beam; two-time Big Ten Gymnast of the Year

The all-around race at the 2019 NCAAs was expected to be a battle between Nichols and Ross, and few were expecting Ramler to join the two decorated stars atop the leaderboard. She did just that behind one of the best performances in program history — her scores on bars and beam and in the all-around were the best ever for a Minnesota gymnast at nationals — and she tied with Ross for second place with a 39.6625, behind Nichols, and also earned second on bars.

Ramler earned her first career 10.0 score in 2020 on beam, and concluded the season ranked No. 1 in the nation on the event. Now a senior, and with Ross’ and Nichols’ college careers behind them, Ramler enters the new season as a major contender for the all-around title in April.

Lynnzee Brown led Denver to a program-best fourth-place finish in 2019, as well as becoming just the second NCAA champion in Denver’s history thanks to her dynamic floor routine. There were high hopes for Brown and the Pioneers during the 2020 season before a devastating torn Achilles’ tendon halted her season in February. Still, she closed out the season ranked No. 7 in the all-around, and in the top 20 on floor and bars.

Brown is healthy and ready to go for her senior season — and even previewed a “Getting Jiggy Wit It” floor routine in September. With her eyes set on finishing her collegiate career strong and representing Haiti in the 2024 Olympics, Brown will attempt to lead the No. 8 Pioneers back to nationals and make even more history for the school.

As a former two-time U.S. junior all-around champion, the expectations were high for O’Keefe entering her freshman season, but she struggled in her first three meets, failing to score above a 9.875 on any event and scoring a 9.775 or lower on five events. She eventually found her groove and showed flashes of brilliance. She was named the Pac-12’s Freshman of the Week twice, notched two 9.975 scores, earned five event victories and went 30-for-30 on her routines.

Now, with a (mostly complete) season under her belt and having adjusted to the college level, O’Keefe is poised to be the team’s top all-arounder and ready to lead the No. 4-ranked Utes to what they hope is another Pac-12 title and into her first NCAAs.

Some gymnasts come to college and struggle with the weekly grind of competition or the new setting. Wojcik was undoubtedly not one of those gymnasts. To say she had a prolific freshman season would be an understatement — she earned the Big Ten’s all-around and floor titles, nabbed a perfect 10.0 on vault, was named the conference’s Gymnast of the Week five times, helped lift the Wolverines to a Big Ten title and, most notably, was the NCAA champion on beam.

Wojcik continued what she started during her sophomore campaign with career-best scores on all but the vault (it’s hard to top a 10, after all) and in the all-around. The Wolverines enter the season ranked No. 5 and Wojcik and her team will look to win a seventh-straight Big Ten title and do even more damage at nationals.

Often overshadowed by some of her older and more experienced teammates during her first two seasons with the Bruins, expect 2021 to be Frazier’s breakout year. During the first three meets of 2020, Frazier competed in the all-around for UCLA and placed second on two occasions — and wowed with a fan-favorite soul and disco-themed floor routine. An ankle injury limited her to just bars for the rest of the season, but she has proven she’s ready to compete wherever the Bruins need her, and she might just give Dennis a run for her money for the team’s viral floor moment this season.

The U.S. all-around champion in 2017 and a member of the world champion-winning team in 2018, Smith was already a legitimate superstar in the sport and easily the best-known freshman entering the season last year. Even on a team loaded with depth and talent, she needed little time to make the transition from elite and became an immediate contributor.

She won nine events — three on bars, four on beam, one on floor and in the all-around — and ended the year ranked No. 7 in the country on bars. Alongside Webb, she will be expected to fill Nichols’ very big shoes this season and Smith should be more than ready for the moment.