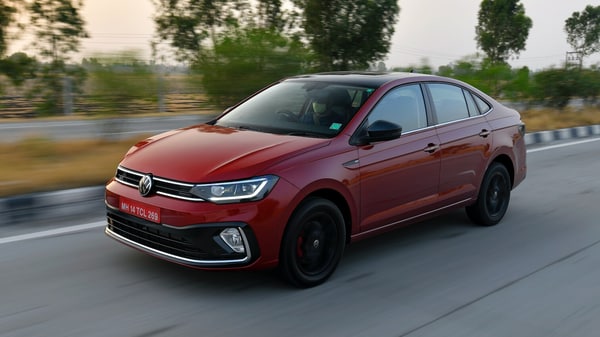 Volkswagen will launch the Virtus premium mid-size sedan in India on June 9. It will take on rivals such as its technical cousin Skoda Slavia besides segment leader Honda City and Maruti Suzuki Ciaz among others.

Volkswagen will drive in its latest premium mid-size sedan Virtus to India tomorrow, June 9. The German carmaker will officially announce the price of the Virtus tomorrow. The pre-bookings for the new Virtus mid-size sedan has already started online and at dealerships. The delivery of the sedan is expected to start before this month ends. With Virtus, Volkswagen is aiming to revive the mid-size sedan segment in India, which has conceded substantial ground in recent times to SUVs.

Volkswagen is likely to launch the Virtus sedan in three basic trims which include Comfortline, Highline and Topline. While the last two trims will get both manual and automatic variants, the base trim Comfortline will only get manual transmission.

Volkswagen Virtus will come with a choice of two engine options and three transmission choices. There is a 1.0-litre TSI engine mated to a six-speed manual transmission and a six-speed automatic gearbox. The other one is a more powerful 1.5-litre, four-cylinder, TSI petrol engine mated to the much-acclaimed 7-speed DSG unit. The 1.0-litre petrol units can generate maximum output of 114 bhp and offers 175 Nm of peak torque. The more capable 1.5-litre unit offers 148 bhp of maximum power and has 250 Nm of maximum torque for the taking.

2022 Volkswagen Virtus is based on the Volkswagen MQB A0 IN platform which also underpins the Slavia from Skoda that was launched earlier this year. Larger than the Vento, the Virtus will also replace this model in the market here. Virtus stands 4,561 mm in length, has a height of 1,507 mm, a width of 1,752 mm and a wheelbase of 2,651 mm. It also has a large boot space at 521 litres. Inside, it comes loaded with features such as 10-inch main display screen, an all-digital driver display screen, wireless phone charging, automatic climate control and ventilated front seats.

Volkswagen is likely to price the Virtus sedan between ₹11 lakh and ₹18 lakh (ex-showroom). It will take on rivals such as its technical cousin Skoda Slavia besides segment leader Honda City and Maruti Suzuki Ciaz among others.