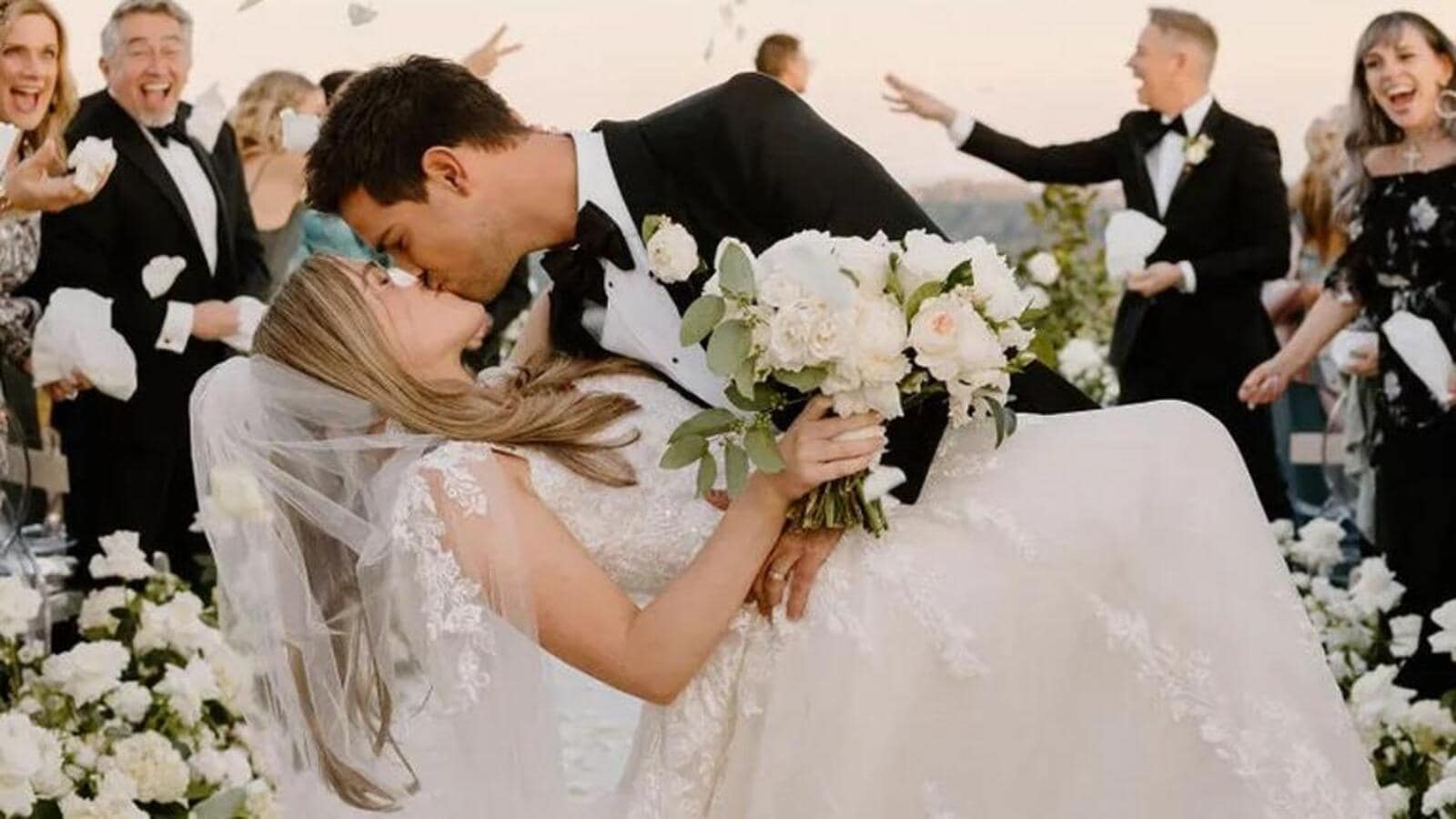 In a year that saw lockdowns life completely, Hollywood saw a spate of weddings as the eagerly awaited nuptials of several celebrity couples took place. As the year draws to a close, we look at some of the biggest.

When actors Ben Affleck and Jennifer Lopez announced their engagement 20 years ago, it was one of the most anticipated weddings, which eventually took place in 2002. The two, however, split in 2004, and began new relationships with other people, only to get back together in 2022. The couple exchanged wedding vows at the Las Vegas wedding chapel on July 16, and said their ‘I dos’ once again in a lavish ceremony held at Affleck’s Hampton Island Preserve estate in Georgia.

Seven months after her lengthy conservatorship ended, pop icon Britney Spears got married to actor and fitness model Sam Asghari, with whom she has been in a relationship since 2016. The wedding took place on June 9 at the couple’s Thousand Oaks residence in Los Angeles. “I just want my life back. I want to be able to get married and have a child,” Spears had said to a probate judge a year prior when contesting her conservatorship, and hence the wedding also marked her freedom.

Kourtney Kardashian and Travis Barker exchanged vows on May 22 in Portofino, Italy, at a Dolce & Gabbana-adorned wedding. For them, it was the third celebration of the year as Kardashian explained it with the quote: ‘Practice makes perfect’. The couple had an unofficial wedding early on April 4 at the One Love Wedding Chapel in Las Vegas. Days before their Italian wedding, the two also attempted a second marriage at a Santa Barbara, California, courthouse, this time with a marriage license in hand.

Actor Kirsten Dunst married her long-time boyfriend Jesse Plemons in a secret intimate ceremony, at a luxury resort near Ocho Rios, Jamaica. The two first met while working on the FX series Fargo, and started dating in 2016. In January 2017, they got engaged and welcomed their first child, son Ennis, in 2018. Their second son, James Robert, was born to the 40-year-old actor last year.

Brooklyn Beckham tied the knot with his fiancée, actor Nicola Peltz in a Jewish ceremony on April 9. After the pre-party, where the couple was seen looking happy and sneaking kisses, their wedding took place at Peltz’s family home in Palm Beach, Florida. The couple’s engagement was announced in July 2020 by Beckham, the oldest child of designer and Spice Girl Victoria Beckham and former soccer great David Beckham.

Actors Lindsay Lohan and financier Bader Shammas, who announced their engagement in November 2021, had a secret wedding. It came to public knowledge only after the Mean Girls star announced the nuptials on July 2 on Instagram that referred to Shammas as her “husband” alongside a photo of her and Bader together. “I am the luckiest woman in the world. Not because I need a man, but because he found me and knew that I wanted to find happiness and grace, all at the same time. I am stunned that this is my husband. My life and my everything,” she wrote.

British singer Rita Ora and filmmaker Taika Waititi, secretly wed on August 8 in London. The couple started dating in May 2021 and reportedly made “nearly simultaneous” marriage proposals to each other a month prior. They exchanged vows in the presence of their closest friends and family members. The two have known each other for a long time and the same was confirmed when Ora shared a photo of them together on Valentine’s Day, mentioning that it was taken four years ago.

Twilight franchise star Taylor Lautner tied the knot with long-time love Taylor Dome on November 11, exactly a year after getting engaged. The couple worked with Josiah Carr and Justin McGregor of Samkoma, who conceptualised and executed everything for their fairytale wedding in California, at Epoch Estate Winery outside of Paso Robles. Days after their wedding, they posted pictures on Instagram and captioned them, “Mr. and Mrs. Taylor Lautner.”

Filmmaker James Gunn tied the knot with actor Jennifer Holland at a private ceremony against the picturesque backdrop of Aspen, Colorado. Following the nuptials, Gunn posted photos from the ceremony revealing that the celebrations included a Marvel vs. DC softball game. “After over 7 years together, I finally married the love of my life, @jenniferlholland. What an incredible, beautiful, stunning day surrounded by the most wonderful family and friends in the world,” he wrote. Holland starred in Peacemaker, which was written and created by James and that’s where their romance started.

Actor Jay Ellis met actor and model Nina Senicar in 2015 at a bar in Los Angeles, and five years later, they took each other as husband and wife. Theirs was a dreamy garden wedding in Tuscany, Italy. Couple’s common friend, creative director Tony Mancilla played the cupid, and later, also officiated their wedding. Their two-year-old daughter, Nora Grace served as the flower girl during the ceremony. The couple had been planning their wedding since 2019 but the pandemic delayed it.