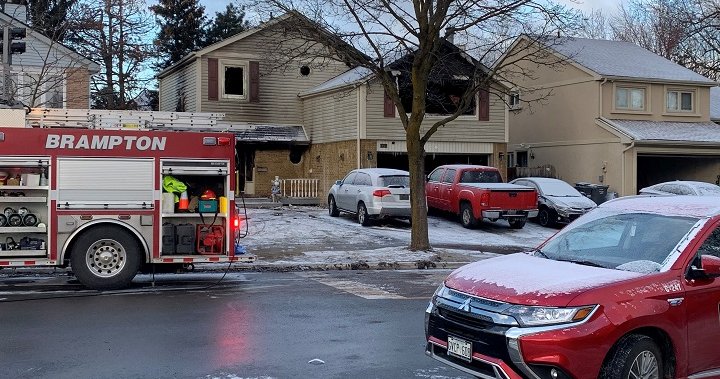 Emergency crews were called to Conestoga Drive, near Sandalwood Parkway and Kennedy Road, just after 2 a.m.

Const. Healther Cannon told reporters two of the children were initially taken by paramedics to hospital in life-threatening condition, and then died a short time later in hospital.

The third child, along with the two adults, were located deceased inside the home, Cannon said.

Brampton Fire Chief Bill Boyes said they believe the ages of the children are 11, eight and six years old. He also said the two adults who also died in the fire are the mother and father of the children.

One adult was transported to a trauma centre with critical injuries, Cannon said. The relationship between the adult in hospital and the family is unknown.

Two other adults were able to escape the house without any physical injuries. Boyes said it is believed the two escaped from the basement.

Boyes said firefighters arrived at the scene and were met with heavy smoke and flames.

“They ended up performed four rescues,” Boyes said. “They did heroic and tremendous work under extremely difficult circumstances and unfortunately we’ve had a tragic outcome here today.”

Boyes said the fire is out but firefighters are still battling hotspots.

He also issued a reminder to residents to have working smoke alarms and carbon monoxide detectors.

The Office of the Fire Marshal has been called in to determine the origin, cause and circumstances of the fire.

UPDATE:
– 2 adults and 3 children have been pronounced deceased
– 1 adult transported to trauma centre, serious injuries
– 2 other adults were able to vacate the house without physical injuries
– Media officers will be attending the scene
– Further information to follow