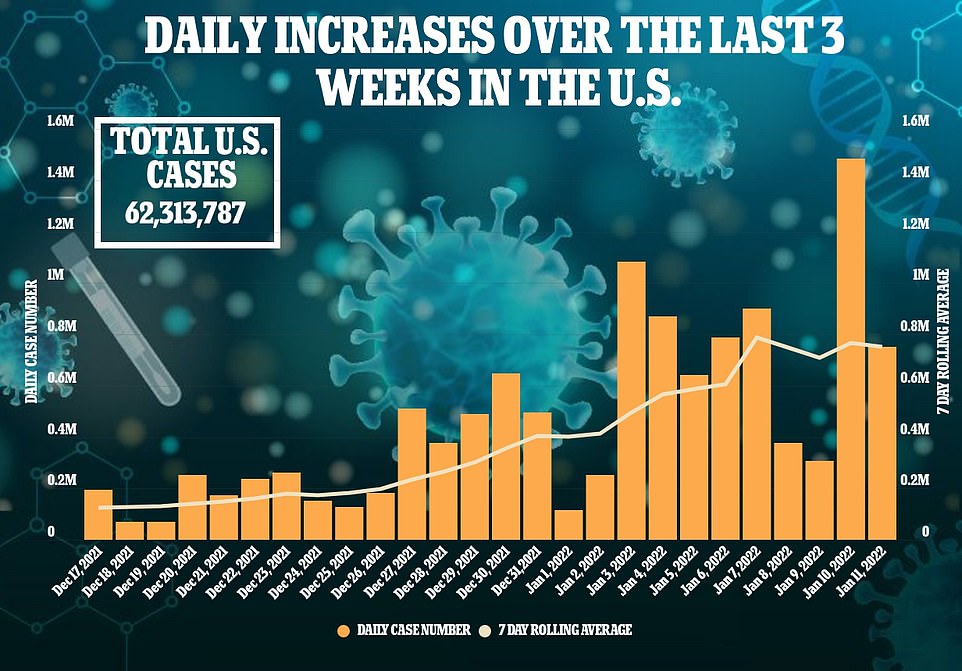 While daily case counts are continuing to rise in the United States, just as they have for much of the past month and a half, all signs are pointing to this recent surge soon peaking, and quickly declining. Infections caused by Omicron are not as severe as well, with deaths only up ten percent over the past two weeks despite cases jumping 184 percent.

The U.S. is currently averaging 750,515 new cases every day, the second highest daily average recorded in the pandemic so far – only trailing the figure recorded Tuesday of 767,200. While it is a long way from the 264,546 cases being average two weeks ago at the end of January, case growth is already starting to slow day to day.

One of the reasons cases may soon decline is the fact that the variant could eventually run out of people to infect. Dr Anthony Fauci, director of the National Institute of Allergies and Infectious Disease and the country’s top infectious disease expert, said Tuesday the variant will eventually infect almost everyone in America.

‘Omicron, with its extraordinary, unprecedented degree of efficiency of transmissibility, will ultimately find just about everybody,’ Fauci said

‘Those who have been vaccinated … and boosted would get exposed. Some, maybe a lot of them, will get infected but will very likely, with some exceptions, do reasonably well in the sense of not having hospitalization and death.’

Fauci, along with many other health officials are still recommending for all Americans to get vaccinated and boosted if they have not already. While around 1,700 Americans are still dying from the virus every day, almost all deaths are among unvaccinated people, and the shots are highly effective at mitigating any complications even after infection.

With how quickly the variant is spreading, and how many people are getting infected in such a short period of time, many are hopeful that Omicron will run out of people to infect in the coming weeks.

Covid cases in the U.S. have surged in recent weeks, up by 185% over the past two weeks. Some experts believe the rapid surge in cases will lead to the variant running out of steam soon and reaching its peak before receding

Dr Pavitra Roychoudhury is a bioinformatics expert at the University of Washington in Seattle. She told DailyMail.com that more tests than ever are coming back positive at the moment, and while it is overwhelming, the recent surge should peak soon.

‘That will result in those case numbers plateauing, and then starting to turn down again… It can’t come soon enough.’

Dr Ali Mokdad, also of the University of Washington, told the Associated Press this week that he also believes the same will occur, and that cases could even start rapidly declining soon.

‘It’s going to come down as fast as it went up,’ Mokdad, who teaches health metrics at the school, said.

The most promising sign for the U.S. is the current situation in England. Once the global hotspot for the variant, cases in the UK are down 45 percent over the past week, with around 120,000 people testing positive every day. While deaths and hospitalizations have risen in recent days, neither figure has managed to keep up with infections at all recently.

What happens in the UK often precedes the U.S. by a few weeks, and the current decline in cases across the pond matches predictions by American health officials that the virus will likely recede in the coming weeks.

South Africa, where the variant was first detected in late November, has seen cases plummet in recent weeks after a massive surge to end 2021. After peaking at over 23,000 cases in mid-December, the nation is only recording 7,000 cases per day at the moment, showing another quick decline in cases after a rapid rise. 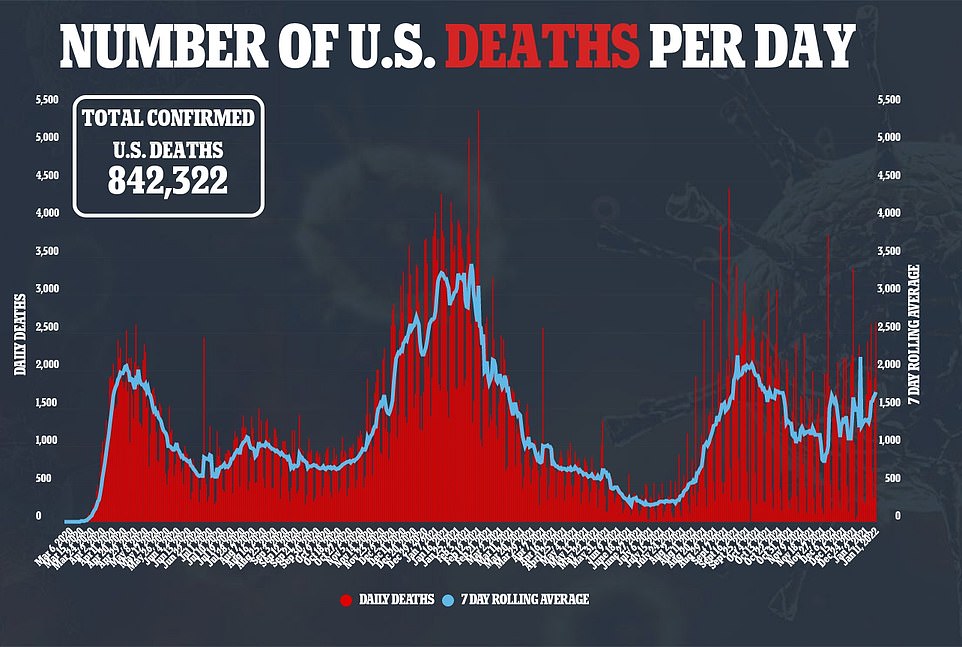 While cases in the U.S. have quickly grown, deaths have not followed. Around 1,700 Americans are dying from Covid every day, only a 10% jump over the past two weeks, and nowhere near records set last winter 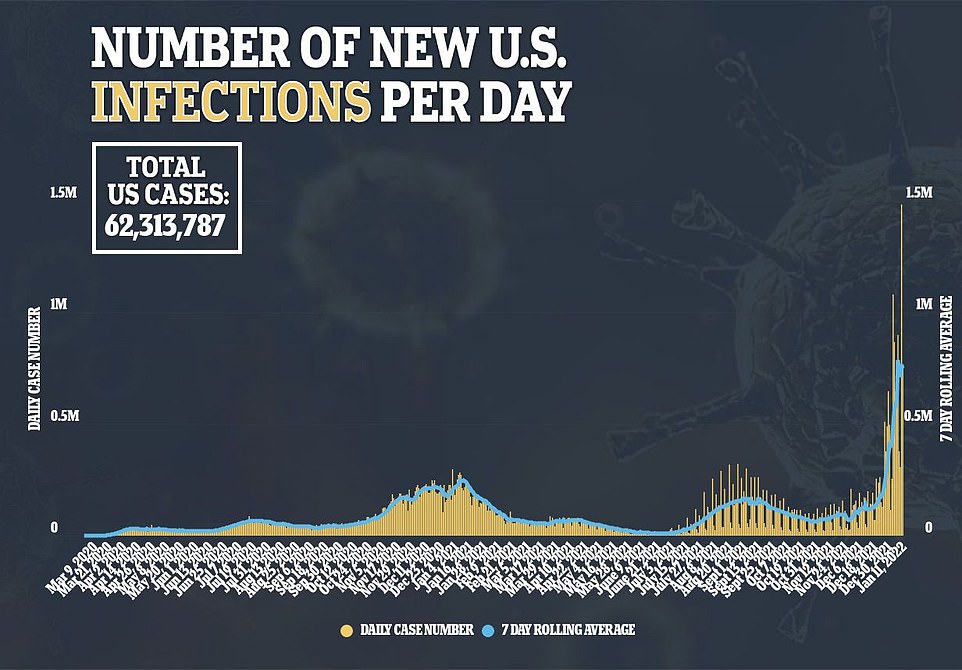 On Tuesday, former chief of the Food and Drug Administration (FDA) predicted that up to 40 percent of Americans will eventually become infected during the surge. He also believes around ten percent of the population is actively infected at any given moment.

When a person gets infected they, at least temporarily, have some protection from re-infection. As the pool of people available for the virus to infect quickly shrinks, the virus will slowly begin to lose steam and recede. Many people have also been jabbed, with 63 percent of Americans fully vaccinated and 23 percent having received a booster, giving even more people protection from the variant.

‘Because you’ll have lots of people who’ve had a natural infection, or [are] protected via vaccination, and they just have not been infected yet and are protected from that. Combined, those two things will hopefully allow [the surge] to hit that peak and then start turning down and gradually reduce,’ she told the DailyMail.com.

Roychoudhury agrees with Mokdad and others that signs from overseas show that the surge could rapidly decline after it reaches its peak.

Another promising sign is coming out of Boston, Massachusetts. The state is among those currently dealing with the worst of the surge, but wastewater data is showing a recent sharp decline in the amount of Covid in the local population.

Wastewater can be tested to find what level of an overall population is dealing with Covid. Traces of the virus are found in a person’s urine and stool, and sewage centers can test massive samples to see prevalence of Covid in the population.

Earlier this year, prevalence of Covid in Boston wastewater began to surge, up to 10,000 RNA copies of the virus per milliliter sampled – more than triple previous levels. The figure has quickly declined to 6,000 copies per milliliter, a 40 percent drop in virus prevalence.

‘But this suggests good news for the disruption caused by the sheer numbers of infections. Will likely take a few days to show up in case counts, which if they follow will show a peak around now. Just like there was a peak this time last year. Past is prologue,’ Bill Hanage, an associate professor at the Harvard School of Public Health, wrote in a tweet.

For now, though, the surge continues across the U.S. Cases are up 185 percent over the past two weeks. Hospitalizations are reaching record levels as well, with 140,641 people in the hospital with Covid every day. That figure also includes people who go to a hospital for a non-Covid reason and test positive while there – though. This means the figure is likely inflated by non-virus illnesses and injuries. 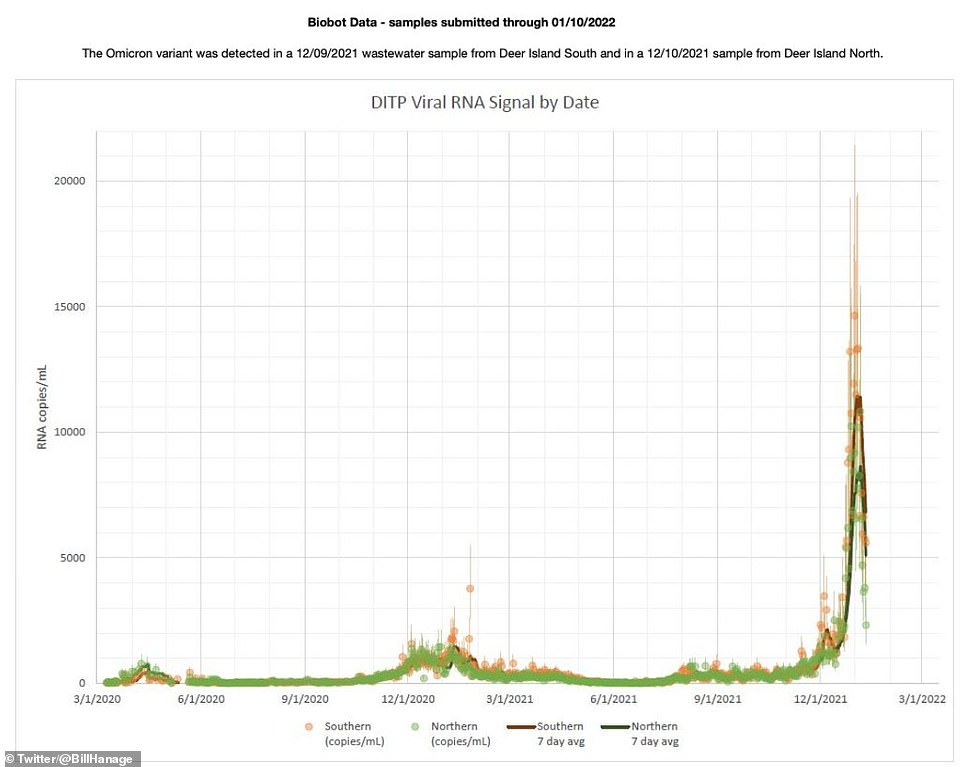 Wastewater data from Boston, in Covid-struck Massachusetts, shows that Covid prevalence in sewage has dropped 40% this week after surging to record levels to start the year 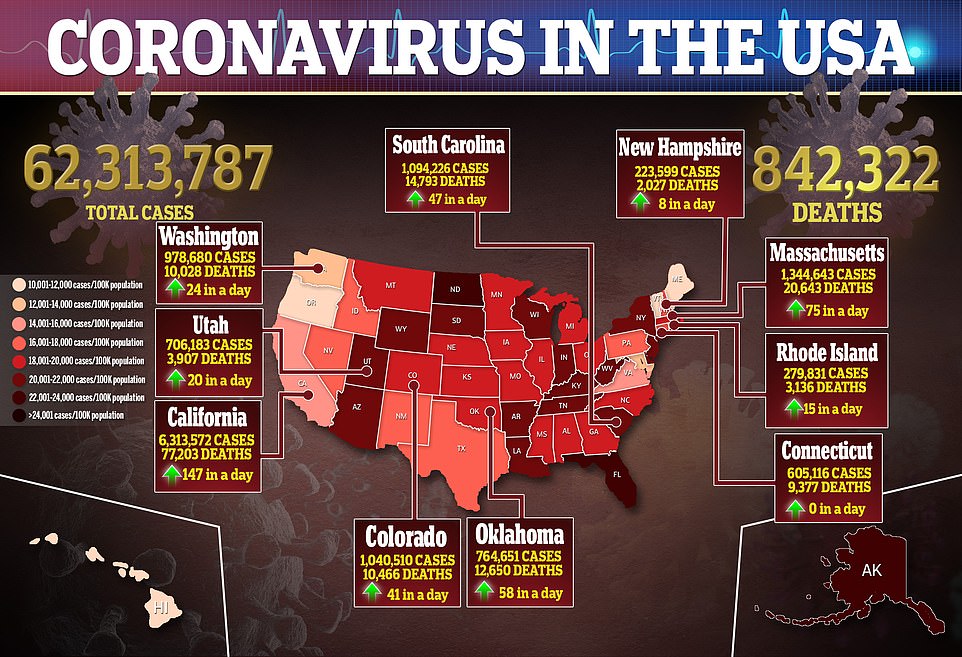