Netflix’s Archive 81 is a mystery-thriller series with horror elements developed by Rebecca Sonnenshine that takes the standard found-footage formula pioneered by Daniel Myrick and Eduardo Sánchez’s 1999 The Blair Witch Project. It modifies it to craft a taut, gripping puzzle box of a series.

Unlike most horror fare that we see today, Archive 81, which comes from James Wan’s Atomic Monster Productions and Sonnenshine’s Sonnenshine Productions, almost entirely avoids jump scares and uses its atmosphere to build tension. Based (very loosely) on a podcast of the same name. The series is expertly scripted, filmed, and acted, and even though the story falters a little at times, it always stays fun to see the protagonists’ (there are two) attempts to peel back the layers to uncover the mystery.

Note: Very minor spoilers here, but I’ve taken care not to share the specifics, so I believe nothing you read here will spoil your experience.

The protagonist in question is a professional film conservator Dan Turner (Mamoudou Athie), an employee of New York’s Museum of the Moving Image, who is asked to restore and digitise a collection of damaged old tapes that apparently belong to a woman who perished in a fire in a Manhattan building called the Visser in 1994. While the task is ordinary enough and also considerably sweet-sounding money-wise ($100k), the conditions stipulated by Dan’s wealthy, mysterious client are strange to say the least. Named Virgil Davenport (Martin Donovan), the corporate titan claims the tapes are too fragile to be transported so Dan will have to work on them at a remote research facility of a company he owns. The place does have sufficient provisions, but there is little to no network coverage and no internet connection, so Dan will be effectively cut off from the world until however long it takes to restore the tapes.

Also, something seems a touch off about the whole thing. Davenport knows too much about Dan’s past, including the fire that killed his family, parents and a sister, when he was a little kid, and that Dan has mental health issues. This is despite the fact that Dan is fiercely privacy conscious, and had erased all traces of his life from the internet. Davenport’s stated motive for the restoration, that he wants to give closure to the family of the bereaved, rings false. 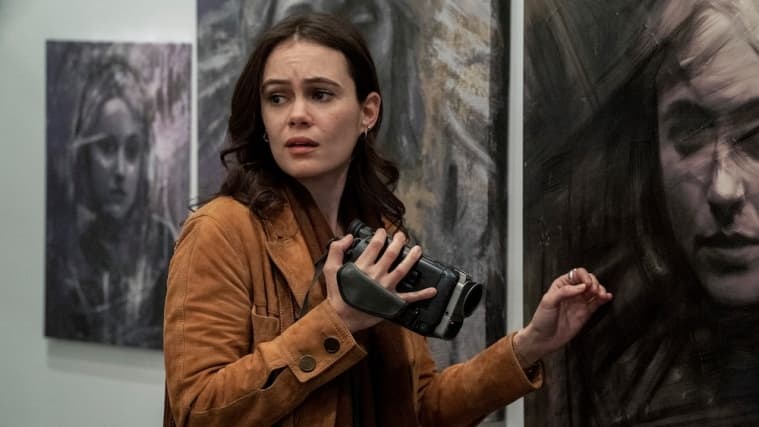 More curious about the tapes than greedy for the monetary reward, Dan anyway signs up for the job. He gets to the location and with great care begins to extract the tapes out of their damaged casings, which look more mouldy than burnt, and respools them to convert into digital form. His link to the outside world, reached through a landline phone, is his best friend Mark Higgins (Matt McGorry), who helps Dan find more about Davenport and the woman on the tape.

Dan soon gets immersed into the story of the young woman who shot them as the tapes are detailed enough to tell a complete narrative. Called Melody Pendras (a superb Dina Shihabi), she arrived as a tenant at the Visser (which turns out to be an ordinary apartment complex) to, ostensibly, do an oral history dissertation project. Her attempts to strike up conversations with the secretive people residing at the Visser failed, however, until she found Jess (Ariana Neal), a friendly teen who was something of an errand girl for the building.

Melody soon learns that something is not right with the Visser and its people. She begins to hear an eerie sound from the vents that appears to be a collective incantation chant. Her investigation eventually reveals a secret cult whose aim is to open a gateway to the Otherworld, so that an ancient pagan god called Kaelego would walk the earth and make the world a better, fairer place. Or at least that is the assumption.

For Dan too, things begin to go bumpy in the night. He sporadically glimpses a demonic visage on his screen, which appears to be trying to come out. He also realises he is being monitored by Davenport and spots a mysterious person wearing a red jacket prowling about the property. Oh, and he spots his father in the tapes. After being frustrated by Davenport’s refusal to answer his questions (like whether he was hired because of his connection to the Visser), he discovers a closed off wing of the building.

If all that weren’t enough, Dan and Melody seem to share a connection across time and space. They can interact in dreams, and Melody talks about her conversations with him on tape that Dan has in his possession. Not only is Melody apparently dead, they are also separated by almost three decades. The show continues to deepen its central time-bending mystery about the mysterious cult and its devotees, present and long-dead, by new reveals in every episode. Refreshingly, the writing is not very forthcoming and withholds more than it lets out, and it is up to the viewers to piece together the clues of the puzzle. Thanks to that, the show retains its sense of mystique right until the explosive finale, and as already mentioned above, most of its scares do not come abruptly, but are gradually built up using dialogue, music, editing, production design, and cinematography, all of which help create an endlessly ominous feel to the story and ambience.

Thus, despite never descending into full horror, Archive 81 remains unsettling. It is one rare horror TV series that makes excellent use of its already intriguing premise and ideas.

Under the Radar is a new weekly series that talks about one great movie or TV series that for some reason slipped most people’s attention — flew under the radar, so to speak — and is certainly worth checking out.