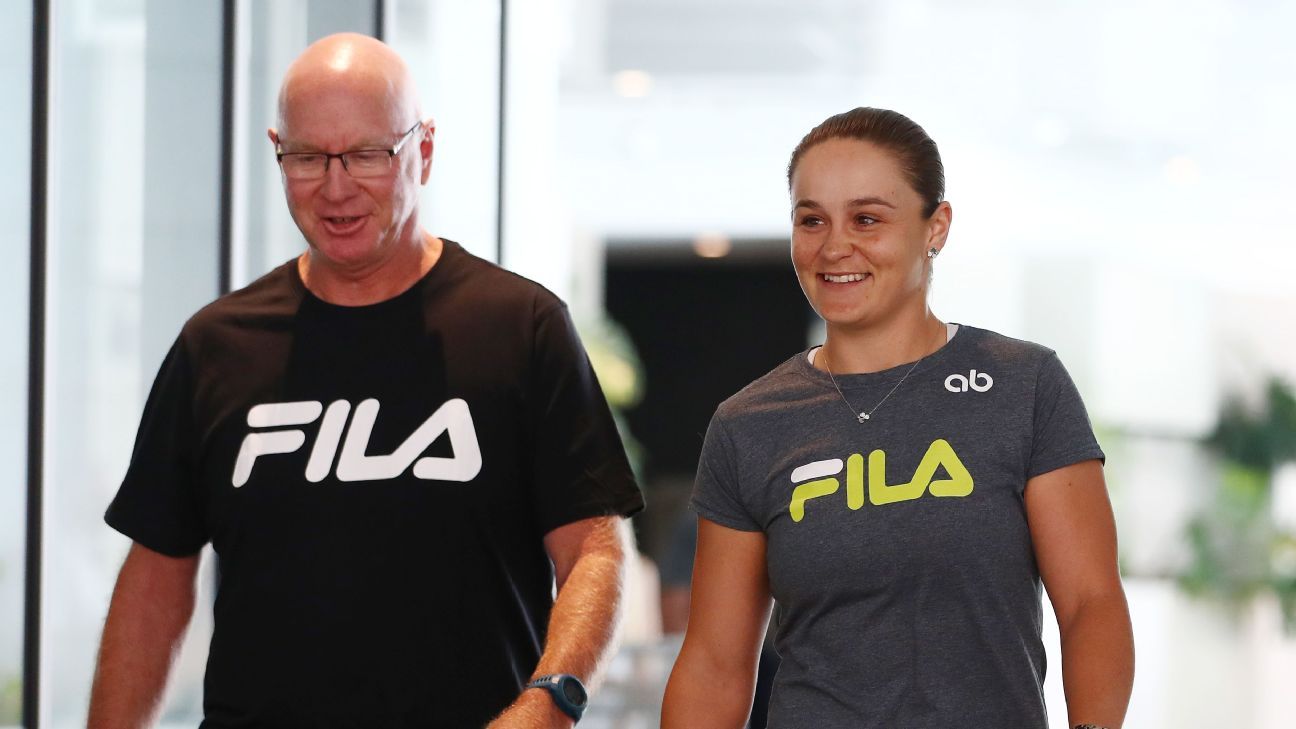 Ashleigh Barty had just won the 2019 French Open and was standing on the court waiting for her team to join her.

It was her first major title, and the realization of every young tennis player’s dream. Her longtime coach Craig Tyzzer rushed to be by her side, preparing an inspirational speech as he made his way toward her.

But before he could share his thoughts and his pride for his star pupil, Barty, then 23, surprised him with a question.

Tyzzer was stunned. But this week, when the now-25-year-old Australian announced she would be walking away from the sport, he was not. Even though Barty holds the world No. 1 ranking and is less than two months removed from snapping a 44-year home title drought at the Australian Open.

Barty’s retirement news shocked the sports world, but not those who know her best.

“Ash does her own thing,” Tyzzer said on Thursday in a joint news conference with Barty. “And when we started [working] together, she wanted to do it the way she wanted to do it. I think it’s the right time. She won the Aussie Open for everyone, not just for her, I think that was for everyone else. I don’t think there’s anything left in the tank for her.”

In a sport where there are so many incredible talents and personalities – many known for their singular focus and constant drive — it makes what Barty chose to do, while at the top of her game, all the more rare.

On Sunday, the tennis world watched 35-year-old Rafael Nadal leave everything he had on the court in the BNP Paribas Open final against Taylor Fritz. Looking to keep his season-long perfect record intact and notch his fourth title on the year, Nadal chased down ball after ball – while struggling to breathe and experiencing discomfort in his chest due to what was later diagnosed as a stress fracture in his rib. It’s what we’ve come to expect from the icon.

Nadal may be unparalleled in his relentless tenacity, but he’s not an outlier in the sport when it comes to his quest for greatness despite the odds.

His longtime rival Roger Federer, now 40, recently underwent a series of challenging knee surgeries in hopes of being able to play in a final Wimbledon, and retire from the sport on his own terms.

Four years ago, Serena Williams, now 40, returned to the tennis court just six months after a life-threatening childbirth with her daughter Olympia, seeking a record-setting 24th major title and to cement her legacy as the best ever.

Her sister Venus Williams, 41, has continued to play on tour despite a debilitating autoimmune disorder. Andy Murray, 34, has been fighting to return to the game’s highest level for the past several years and has undergone multiple surgeries on his hip.

The retirement talk for all of these superstars has been omnipresent for the past several years, but their unwavering love of the game hasn’t let them go just yet despite the ever-looming presence of Father Time. Observers almost expect such players to be dragged or carried off the court when their time in the sport truly is up.

“It was never about the successes. It was about fulfilling Ash’s dreams and she did that.”

But that’s never been who Barty is, nor what she wanted.

“It speaks volumes to who she is,” Tyzzer said. “How many Grand Slams are enough? We’re amazed, we’ve seen Rafa at the French, and what he’s done and to know how hard it is to win one Grand Slam, to do what he’s done is incredible, but it was never about the successes. It was about fulfilling Ash’s dreams and she did that.”

And now Barty says, she has other goals and things she wants to do.

“It’s exciting because there are so many things Ash Barty, the person, wants to achieve and dreams that I want to chase after,” Barty said in a press conference with reporters on Thursday. “But I think my purpose won’t change, I just get to contribute in a different way.”

Barty has had time over the years to see herself as Ash Barty, the person, and not merely Ash Barty, the tennis star. She knows there’s more to her than wins and losses on the court, and she’s prepared for this moment in a way few of her peers might be.

Like Federer, Barty was a junior Wimbledon champion and the expectations were sky-high from an early age. But unlike many of the teenage sensations we’ve come to know, Barty openly hated the tour. A self-professed “homebody,” she missed Australia and her family and loathed having to be away for months on end. After the US Open in 2014, the 18-year-old headed home to begin what became an 18-month-break from the sport.

She temporarily traded her racket for a cricket bat and she played in Australia’s Women’s Big Bash League. Being part of a team helped her rediscover her joy of competing. By 2016, she had returned to the tennis court, and she began her steady rise up the ranks.

In 2018 she won her first major doubles title at the US Open (with American Coco Vandeweghe) and she became the French Open champion the following year. She took over the world No. 1 ranking the following month for the first time – something she’s owned for 121 weeks in total, and the past 114 weeks. No woman has won more titles than she has since the start of the 2017 season.

There have been setbacks along the way — the pandemic derailing much of her 2020 season and a hip injury in 2021 — but she achieved her lifelong dream of winning at Wimbledon in 2021.

In her Instagram video announcing her retirement, Barty said she still felt not “quite fulfilled” after Wimbledon, so she continued to play.

But Tyzzer knew it was going to be hard to continue to keep her motivated.

She found a way to maintain her focus in the preseason and while preparing for the 2022 Australian summer of competition, but they all knew the end was near. Winning the Australian Open title only further cemented that the timing was right to move on to her next chapter.

She had been hoping for one final chance to play as Australia hosted Slovakia in the qualifiers for the Billie Jean King Cup next month, but the event was ultimately canceled after Australia took Russia’s spot in the finals and no longer needed to qualify.

But despite the drastic change in plans, the affable Barty seemed to have already accepted how her career ended.

“Being fluid and being flexible has been a massive part of our career,” Barty said on Thursday. “Accepting those are the things we can’t control. But, yeah, I mean, happy to have the Australian Open as my last match. Turned out to be an incredible moment, certainly memories that I’ll never forget.”

For players like Nadal, Federer, Murray and the Williams sisters there seems to be an insatiable thirst for more. But Barty views it differently. She never sought out the spotlight, nor seemed quite comfortable in it alone, always saying “We” or “Our” and rarely “I” and crediting her team for her success.

Besides, as Barty said in her retirement video, on-court results have never dictated her happiness.

That sentiment couldn’t have been more clear than following a disappointing loss to Sofia Kenin in the 2020 Australian Open semifinals. With the weight of the country’s hopes on her shoulders, Barty might well have been upset or frustrated when speaking to the media that afternoon.

Instead, she proudly carried her 12-week-old niece into her press conference, and answered questions with the infant on her lap and a burp cloth on her shoulder. She pointed to her niece and gave a content smile.

“This is what life is all about,” Barty said. “It’s amazing.”