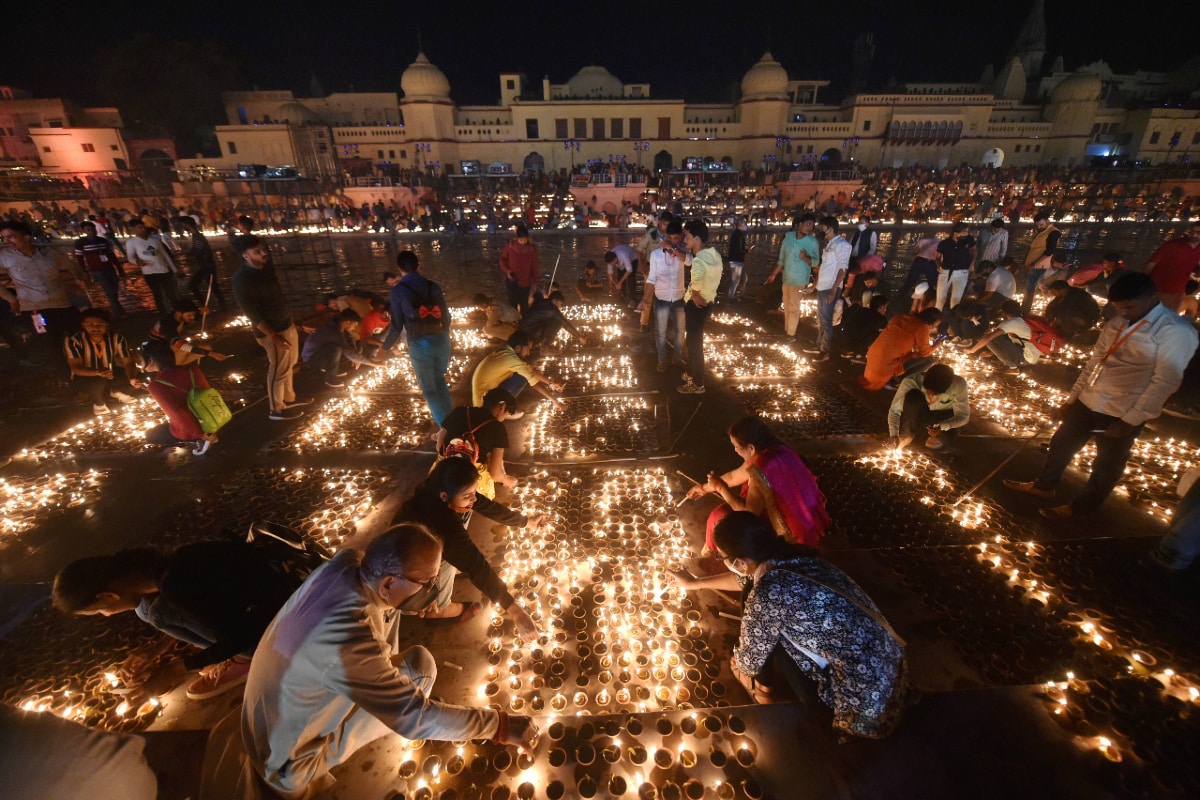 The scene of ‘Treta Yug’ came to life on Friday in Ayodhya when Ram, Sita and Laxman touched the grounds of Ayodhya on the ‘Pushpak Vimana’ after completing 14 years in exile. The festival of Diwali is based on ‘Treta Yug’.

The state government also organised a laser and sound show, cultural programmes and the lighting of a record 5.51 lakh earthen lamps on the banks of the Saryu. The figure has been claimed by the government.

Chief Minister Yogi Adityanath and Governor Anandiben Patel attended the ‘Deepotsav’, the first since the groundbreaking ceremony earlier this year of a Ram temple. Several new development projects were launched to mark the occasion. Adityanath also offered prayers on behalf of devotees after which the scenic reunion of Ram and his brother Bharat took place.

Adityanath first went to Shri Ram Janmabhoomi Temple and offered prayers. After the program, he will rest for the night at Circuit House and on Saturday morning leave for Gorakhpur after ‘darshan’ at Hanumangarhi.

“Our generation is not only fortunate to see the start of the construction of a Ram temple here but we also attended the historic event. In the struggle of 500 years, many saints passed away with a dream to see the start of construction. I thank PM Modi who is the one who implemented the ideology of Ram Rajya,” Adityanath said while addressing the ‘Deepotsav’ event. Modi had performed the ‘bhoomi pujan’ of a Supreme Court-mandated Ram temple in Ayodhya on August 5, bringing to fruition the BJP’s ‘mandir’ movement that defined its politics for three decades and took it to the heights of power.

“It is the dream of PM Modi to develop Ayodhya as Vedic Ramayana City and it should be the most beautiful. We are here to seek support of you all as to how it can be developed that it has glimpse of a Vedic city,” said Adityanath.

The BJP government in UP started Deepotsav celebrations in Ayodhya after Adityanath became chief minister in March 2017. As a special Diwali gift from him, Ayodhya will get an international airport project this time.

The celebrations began from Friday afternoon itself when a grand coronation procession of Lord Ram started from Saket college in Ayodhya to reach the riverbank after covering a stretch of about five kilometres. The procession has 11 tableaux, built on the Ramayana themes, participating in it. The themes include Gurukul Shiksha, Ram-Sita Vivah, Kewat Prasang, Ram Darbaar, Shabri-Ram Milaap and Lanka Dahan among others. Besides the Saryu bank, the Ram Janmabhoomi, the site of upcoming Ram temple, was lit up by 11,000 earthen lamps in the evening, when a grand Aarti was held at the Saryu river after the sunset.

Other projects for people of Ayodhya include a modern sewage treatment plant to maintain the flow and cleanliness of the river. The pilgrim town will also have an international Ramlila Centre to be built at a cost of around Rs 3.47 crore, a ‘Bhajan’ site at Rs 19.02 crore, a Queen Heo Memorial Park for Rs 21.92 crore, a Ram Katha Gallery worth Rs 7.59 crore, the expansion of Ram Katha Park at Rs 2.75 crore and the beautification of Ram ki Paidi at Rs 12.65 crore, officials said. Among development projects, the holy city will also have a modern bus stand (Rs 7.40 crore),a multi-level parking lot (Rs 16.44 crore) and the renovation of road and footpaths (Rs 8.40 crore) besides others, they said.

Hailing Modi for India’s fight against the coronavirus

, Adityanath said, “We are fighting strongly under his (PM’s) leadership and we will defeat the virus.” In her speech, the Governor said Ram and Ramrajya were “inseparable parts of the Indian culture” and spoke at length about the ideals of the Maryada Purushottam. She advised the people not to lower their guards in their fight against the pandemic till it was finished.

Deputy CM Keshav Prasad Maurya, BJP state president Swatantra Dev Singh and a number of saints and ministers were present on the occasion. With a view to ensuring a global recognition and identity to Ayodhya, Adityanath has initiated a number of works in the temple town including Deepotsav being organised on the occasion of Diwali every year.

“Since the formation of the Adityanath government in Uttar Pradesh, many events have been organised, from Deepotsav to Ram Leela, which have earned a new identity to Ayodhya globally,” a government spokesman said on Friday. Giving an account of the works in the temple town, he said apart from setting up of Navya Ayodhya as the coordinated model of Vedic and modern city, the grandest and divine temple of Lord Ram, a tall statue of the Hindu deity — which would be the world’s tallest statue — is set to leave an “indelible impression” on the people of the world.

A four-lane road from Ayodhya to Sultanpur National Highway (NH) 330 to the airport is to be renovated at a cost of Rs 18.75 crore. The National Highways Authority of India is making a proposal for construction of a bypass for Ayodhya Dham from Sohawal to Vikramjot, the spokesman said. The work of widening of the four-lane road from Rae Bareli to Ayodhya is also to be done at a cost of about Rs 1,500 crore, he said.

During the Deepotsav, seven unique cultures from Gujarat to Bundelkhand will be seen together on the Saryu coast. The UP government has invited local artists from Gujarat, Maharashtra, Andhra Pradesh, Rajasthan, Uttarakhand, Braj, Bundelkhand to Ayodhya to showcase their talents.

The government aims to provide a platform especially to the folk artists of Bundelkhand. The Culture Department of the State Government has included the Diwari Toli of Bundelkhand in the programme.