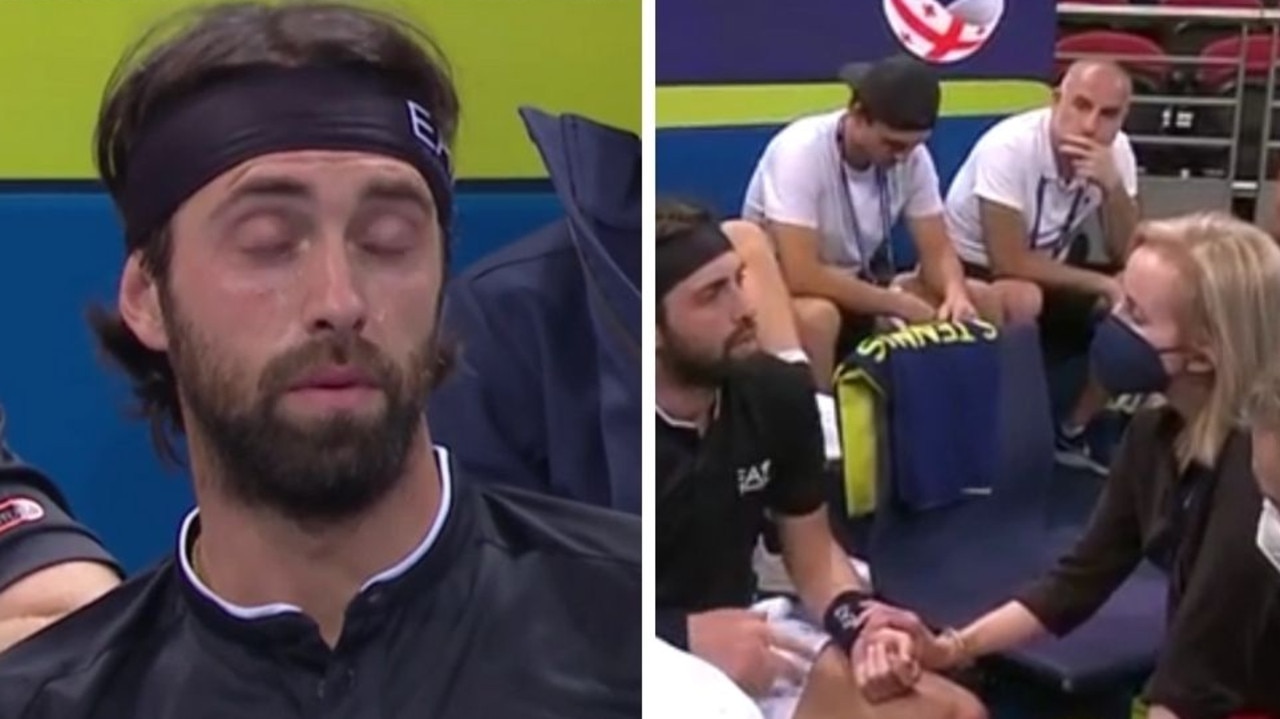 Play was brought to a dramatic halt on day five of Sydney’s ATP Cup when one player began struggling to breathe.

Dramatic scenes unfolded at Sydney’s ATP Cup on Wednesday night when Georgia’s Nikoloz Basilashivili began struggling to breathe early in his match with World No. 4 Stefanos Tsitsipas, forcing play to be cancelled.

Tsitsipas led four games to one in the first set when play was brought to an abrupt halt at Team Georgia’s request.

A doctor and physiotherapist attended to a visibly rattled Basilashvili, who sat courtside with his Georgian teammates.

“This is concerning, very concerning I would say,” Stan Sport’s commentary team said.

“If you feel like you can’t take any kind of deep breath at this level and this intensity, that’s an issue.”

In broadcast of the game, Basilashvili could be heard telling his team that “every shot I’m out of breath”.

Soon afterwards, he repeatedly told medical staff he was “struggling to breathe”.

Basilashvili was not hobbled as medical staff assisted him from the court but did appear shaken. When he returned from the dressing rooms, play was called off and the match was awarded to Tsitsipas and Team Greece.

Despite struggling with an elbow injury this week, Tsitsipas returned to the court for the doubles match against Georgia shortly afterwards.

Earlier on Wednesday, Poland stunned the Argentinians, who had not lost a single match before Wednesday, winning every set in their tie to qualify for the semi-finals.

Elsewhere, Spain claimed a tie victory over Serbia to lock up Group A’s spot in the semi-finals. World No. 19 Roberto Bautista Agut was the hero for Spain in the group stage, polishing off Norway’s Casper Ruud and Christian Garin of Chile, both of whom are ranked higher than he is, in straight sets.

Having lost the doubles match against Russia on Tuesday, Australia is out of the semi-final race, but faces France on Thursday evening for its last tie of the ATP Cup.

Italy and Russia will tussle for Group B’s spot in the semi-finals at Ken Rosewall Arena on Thursday morning,

All four teams in Group C remain in the hunt for a semi-final berth.

The British will qualify if they win their tie with the USA at Qudos Bank Arena on Thursday and Germany defeats Canada.

However, if the British win and Canada wins, it’ll be the Canadians advancing to the next stage of the tournament.

America has the chance to make the semi-finals as well, but will need to defeat Great Britain and hope Canada beats Germany.

Germany is set to advance to the final if it defeats Canada and the USA beats Great Britain.