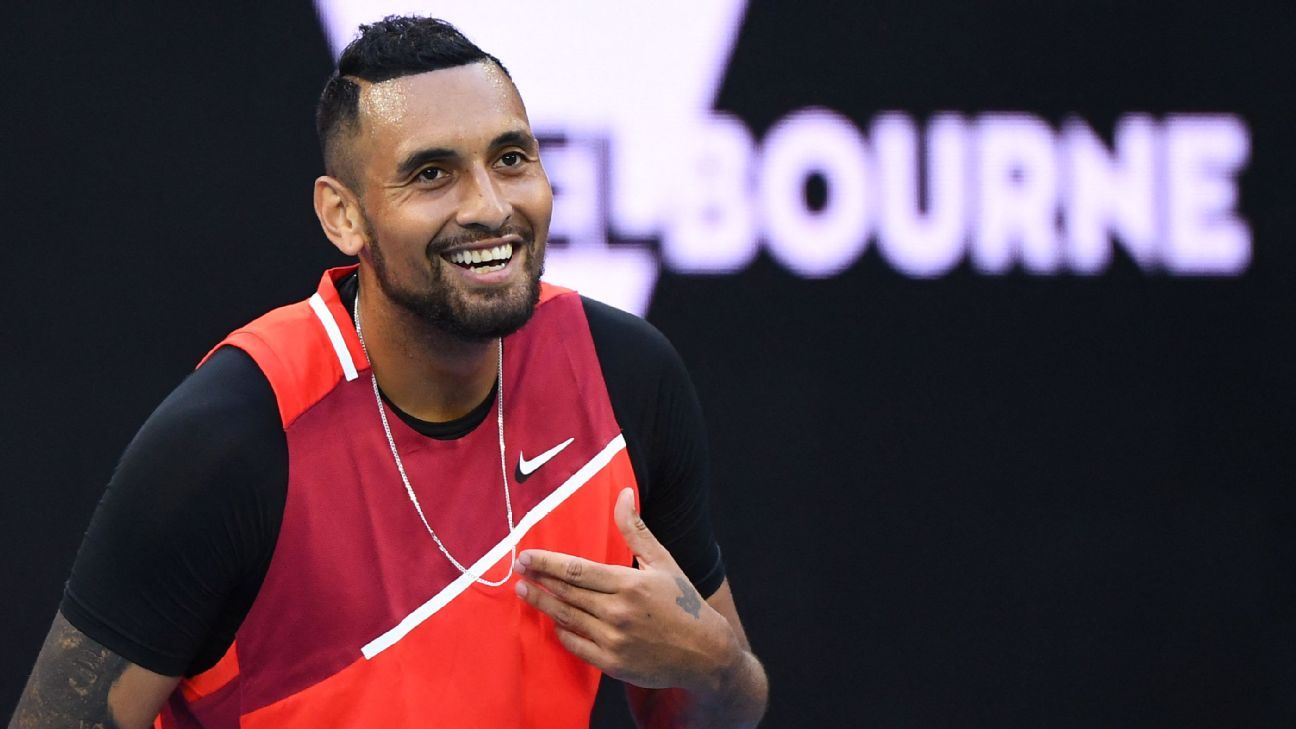 MELBOURNE, Australia — In a major tournament bereft of genuine drawcards and crowd-pleasers, the head honchos at Tennis Australia would have to be breathing a massive sigh of relief, thinking: thank goodness for Nick Kyrgios.

The list of tennis stars absent from the 2022 Australian Open only grew longer when reigning men’s champion and world No. 1 Novak Djokovic learned Sunday his Australian visa was not valid and thus was deported from the country. The 34-year-old Serbian joined the likes of Roger Federer and Serena Williams — arguably the sport’s three most marketable and broadcast-friendly players — on the sidelines.

Within minutes of the Djokovic verdict being handed down, British analytics company Search Intelligence reported that search trends for Australian Open ticket refunds fared 25% higher than anything associated with purchasing tournament tickets. Throw the COVID-19 pandemic into the picture and it was a recipe for a rather scarcely-attended fortnight Down Under.

But as long as local hope Kyrgios is still in the draw, there are still plenty of reasons for fans to flock to Melbourne Park. His world ranking may have plummeted to No. 115 but there’s almost no one else on tour who can generate excitement and wow spectators quite like the 26-year-old from Canberra.

On Tuesday evening, in his first round match against Brit Liam Broady, Kyrgios was at his jaw-dropping best, entertaining the John Cain Arena crowd in his own unique way en route to a comfortable 6-4, 6-4, 6-3 win inside two hours.

You have to admire him. This time last week, Kyrgios announced to the world he’d contracted COVID-19 and there was serious doubt surrounding whether he’d be fit to take part in his home Slam. Yet here he was, just seven days later. Fully recovered (for the most part) and putting on a show.

“When I tested positive, it wasn’t great news and I had some doubts,” Kyrgios said after the win over Broady. “The last week has been really tough but I was lucky enough to have a tennis court and hit some serves. I served f—ing well today.”

Before the match clock had reached five minutes, Kyrgios, sporting a red and green tank top which would have looked more at home in an NBA arena rather than on a tennis court, had already impersonated Cristiano Ronaldo’s trademark ‘SIUU’ goal celebration, attempted a cheeky under-arm, through-the-legs first serve, twice begged the crowd to cheer louder, and berated himself for missing a ridiculous cross-court forehand.

You could have packed up and walked out of the arena at the first sit-down and still felt as if you received the full Kyrgios experience. Watching him play, particularly at a Slam, is often a rollercoaster ride which leaves those in attendance feeling exhausted by the end of it.

But who would dare even consider vacating their seat? ‘King Kyrgios’ is always box office entertainment and over the course of three sets, those in the stadium were treated to a serving masterclass as well as a bevvy of shots which had many scratching their heads in disbelief. He hit tweeners, behind-the-back shots, kicked a tennis ball into the stands and, after his place in the second round was secure, enjoyed a cheeky sip of beer. The crowd, of course, lapped it all up.

“I don’t know what I’ve done to this crowd but you guys are like a zoo in here now. You’re super loud,” Kyrgios told the fans inside John Cain Arena. “I’m happy to be in front of you guys, it’s so fun.”

Some of the numbers behind the first round performance were staggering. Kyrgios sent down 21 aces and only double faulted once, while his first serve landed in play 81% of the time. He won all 14 service games and struck 41 winners for the match, almost double what Broady managed.

In many ways it’s a shame Kyrgios is unseeded in Melbourne. At his best, heck even at 75%, he’s clearly a top 30 player in the world, and the draw did him no favours. His next match will be Thursday against world No. 2 Daniil Medvedev, but you’d be foolish to write him off. The pair have played twice before and the Australian has won out on both occasions.

“We’re going to be playing on Rod Laver, let’s be honest,” Kyrgios said. “[Medvedev’s] an amazing player. He’s won a Grand Slam. I’m not even looking ahead but I know I’ll have to play some good tennis and we’ll see what happens.”