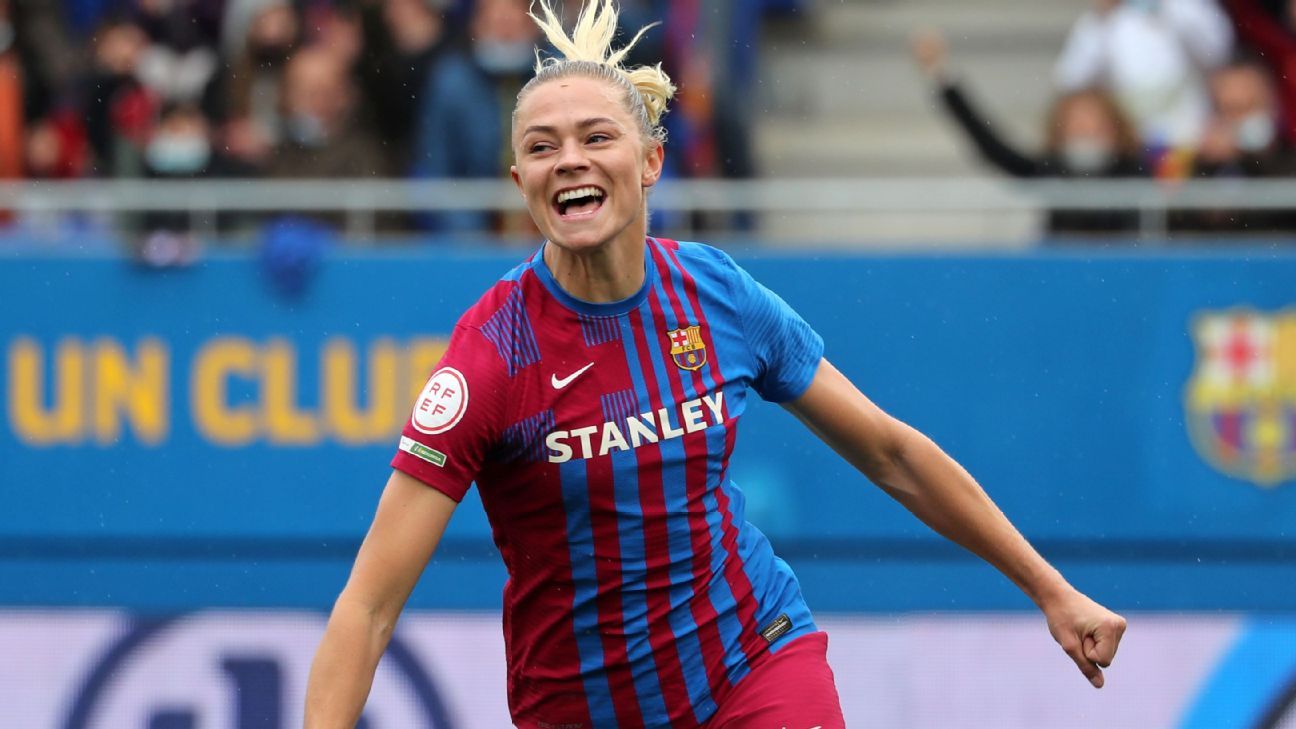 Forward Fridolina Rolfo has said Barcelona could dominate women’s football for the next decade in the same way Lyon have done previously ahead of playing at a sold out Camp Nou against Real Madrid this week.

Lyon won eight Champions League titles between 2011 and 2020 and had won five in a row when Barca ended their European reign by lifting the trophy for the first time in the club’s history last season.

Barca, who won the Treble last term, have now set their sights on retaining the trophy and have a 3-1 quarterfinal lead over Madrid heading into Wednesday’s historic game, which will see them play a competitive fixture in front of supporters at Camp Nou for the first ever time.

“It’s not something we talk about, but I have to say I think it is possible,” Sweden international Rolfo told ESPN when asked if matching Lyon’s success was a motivation for this record-breaking Barca side.

“If you see the quality of the team and what the club is doing, it’s possible. But we have to be humble. If you look around, you see the European clubs, they’re at a really high level, there are great clubs out there. So I am not sure it will be like that, but it’s possible.”

Barca have already sealed a third successive league title in Spain this season, winning all 25 of their matches and scoring 138 goals and conceding just seven in the process.

The biggest fear, heading into the latter stages of the Champions League, is that their domestic dominance could count against them when they have to face Europe’s best sides.

“I have never played with such a good team before,” Rolfo added, knocking back the suggestion Barca could rest on their laurels. “You can feel it’s something special. This is a really competitive group of players and everyone wants success and we want to win [every single game].”

“The club want to win everything and so do the players, so we have to work even harder. With the coach [Jonatan Giraldez], I was a bit surprised when I came here at the beginning, putting up smaller goals before [matches] so it’s not about only winning a game, we have to play good, we have to do this and this and this.

“I think that is important. You are putting pressure before the most important games are coming. I think that’s something that’s helped us to be focused during 90 minutes every game.”

Midfielder Ingrid Engen added: “Once you have won everything, it’s even harder to do it one more time. This is what it’s all about for this team, to do it again. It’s not an option to not go for everything.

“I feel like it’s the mentality of the team. We talk about it in the dressing room. Every time we go out, every game is important. We are not happy to stop doing our best. That is also why you see we have these results [scoring] many goals.

“We are not happy at the break if we are leading 3-0, we want more. We do things the same way, we don’t change anything. At Barcelona, it’s not enough to win, it’s how you play, that’s in the roots of this team.”

Barca’s success has seen an increase in the interest in women’s football in the city, with posters of Ballon d’Or winner and club captain Alexia Putellas filling billboards previously reserved for Lionel Messi.

That interest led to Wednesday’s game selling out in a week, with a limited number of tickets made available for re-sale this month. If everyone with a ticket comes to the game, Barca will break the 90,185 attendance record for a women’s match, set at the 1999 World Cup final in Pasadena.

“[Wednesday] can be the start of a new era, honestly,” Putellas said in a news conference on Tuesday of the importance of girls around Spain and the world seeing that they can aspire to play at the Camp Nou.

“This game is going to inspire a lot of people, especially girls. I didn’t imagine it [was possible] because I just saw men, which is why I say it can open many doors for many people.

“I knew I could play football, but it did not seem accessible on this scale. That’s why this match can mark a before and after because Barca are the biggest club in the world and they have a voice. Girls can now dream of being the next Sandra [Panos], Marta [Torrejon], Patri [Guijarro], Jenni [Hermoso] or whoever. It’s the start of something beautiful.”