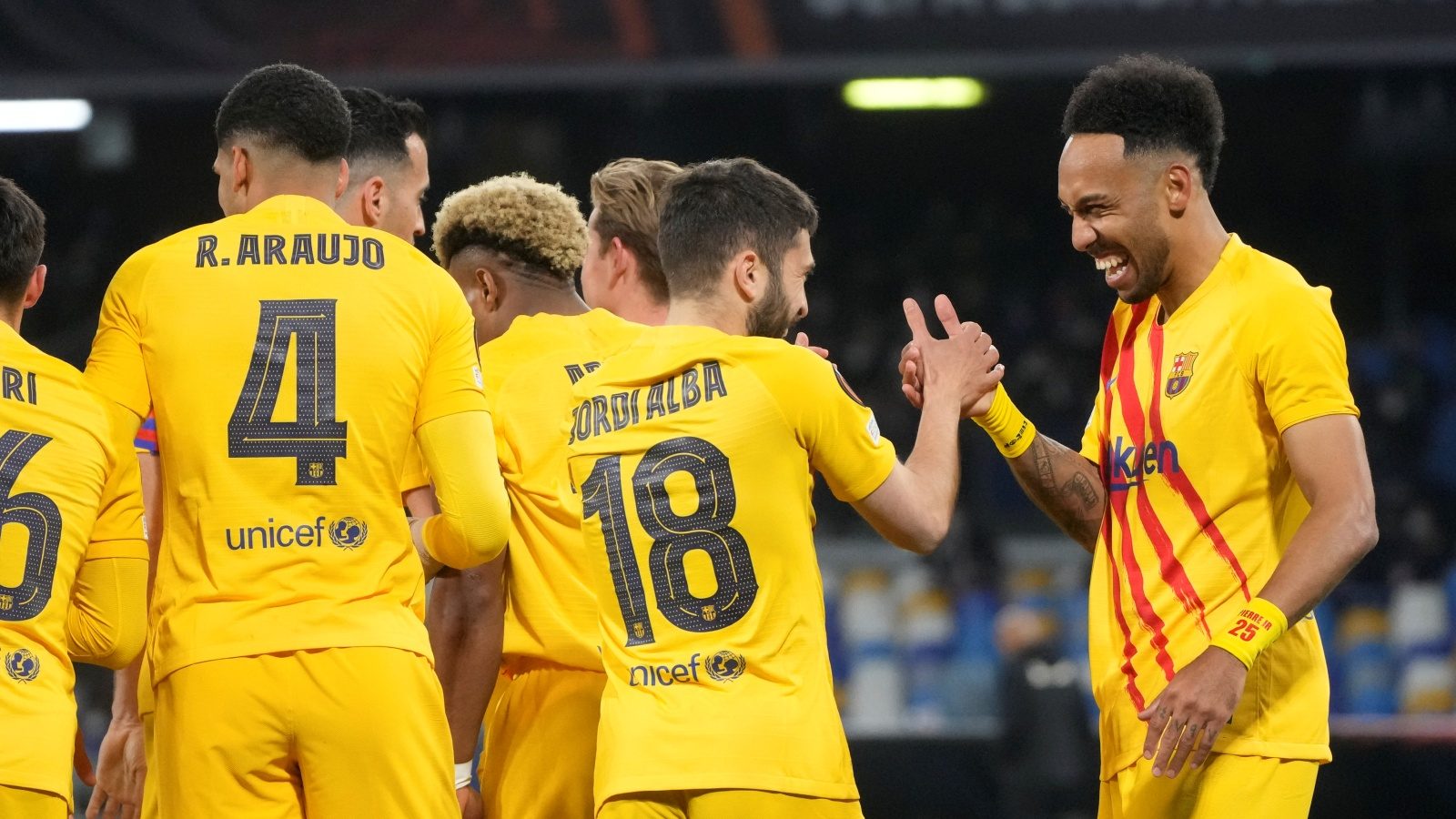 Barcelona cruised into the last 16 of the Europa League on Thursday after comfortably seeing off Napoli 4-2 to go through 5-3 on aggregate in a serious show of force.

The Catalan giants were on top almost from the off in Naples thanks to Jordi Alba expertly finishing a lightning counter-attack from a Napoli corner, and Frenkie de Jong’s superb long range effort effectively ended the tie with three quarters of the match to play.

Xavi’s thrilling side could have had more before Lorenzo Insigne briefly gave the hosts hope from the penalty spot mid-way through the first half, and Gerard Pique made absolutely sure there would be no Napoli comeback on the stroke of half-time.

A sobering night for Napoli, who are chasing a first Serie A title in three decades, was capped just before the hour mark by Pierre-Emerick Aubameyang, impressive up front for a dynamic Barca team which looks like it can go all the way in the competition.

“We dominated we for 90 minutes and that’s the first time we’ve done that since I became coach,” Xavi told reporters.

“It’s a win over a team which I repeat is a Champions League-level team, one which does not concede many goals and is fighting for the league title.”

Matteo Politano pulled one back in the dying minutes but it was a stroll for Barca into Friday’s draw for the last 16, whose matches will be played on March 10 and 17.

“We made life difficult for ourselves with that awful start… You need to press Barcelona together as a team otherwise you will be in trouble as they will just pass it around you,” Politano told Sky Sport Italia.

The night began with plenty of enthusiasm at the Stadio Diego Armando Maradona as the two teams lined up with a banner which read “Stop War” in protest at Russia’s invasion of Ukraine which garnered loud applause.

However Napoli immediately handed the initiative to Barca, a dreadful short corner cleared to Adana Traore who raced up the field and fed Alba, who calmly slotted home the opener.

That error, and the blisteringly quick manner in which it was punished, rattled the home side and when De Jong curled in an exquisite second the match and tie was all-but done and dusted.

Sergio Dest and Aubameyang then had shots whistle by Alex Meret’s goal as the home fans began to voice their displeasure at their team’s timid efforts.

Napoli were given a lifeline by Marc-Andre ter Stegen, who came charging out to beat Victor Osimhen to the ball but took out the Nigerian and after a VAR check ended up giving away a penalty.

Insigne slotted home the 23rd-minute spot-kick but Barca continued their dominance and the home fans let out a sigh of relief when Aubameyang somehow headed wide from point-blank range.

Any illusion of Napoli getting through was ended on the stroke of half-time, when they failed to clear a corner and Pique scuffed a left-footed shot past Meret.

Barca’s dominance was such that when Aubameyang ended a long spell of possession, and away fan ‘oles’, with a classy finish the Napoli supporters applauded.

The away section garnered more appreciation from their hosts when they started chanting anti-Juventus songs, but the rest of the match was played out in an eerie silence.

The home fans started streaming for the exits with over 10 minutes left as Barca contented themselves by stroking the ball around, and Politano’s nicely-taken consolation goal drew little more than a polite ripple from a long-since beaten crowd.