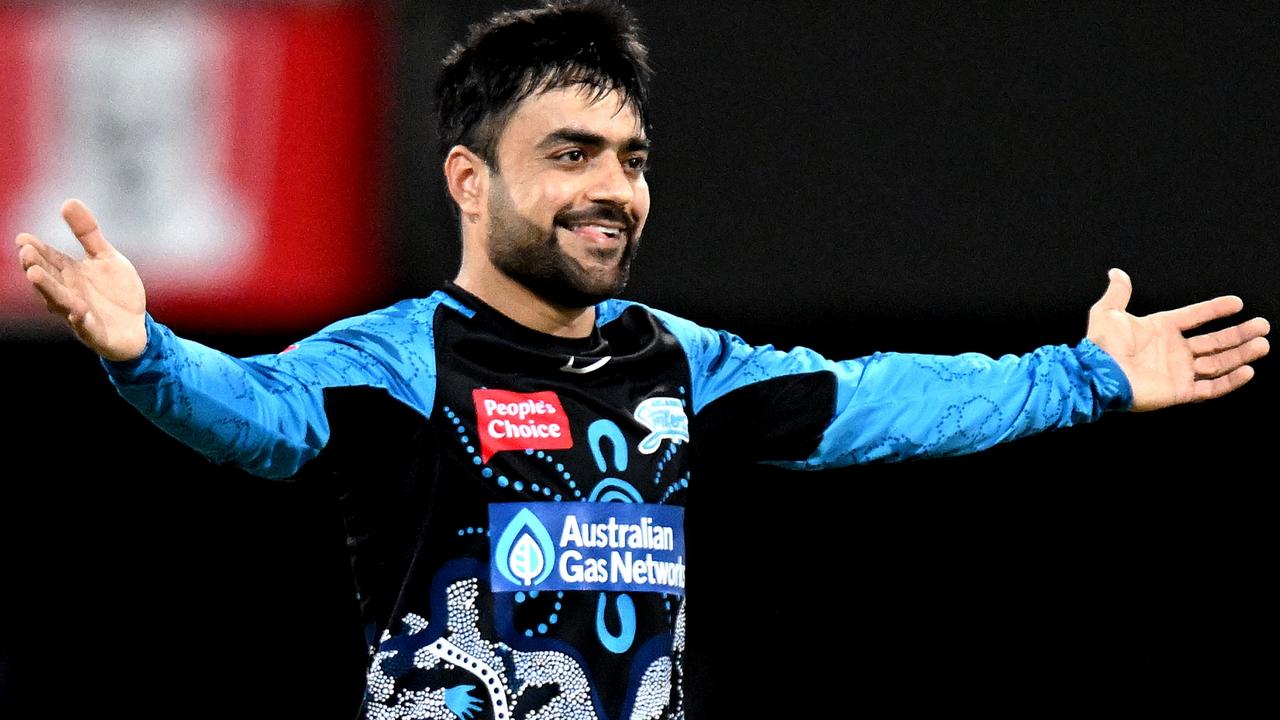 As he prepares to leave Australia shores, T20 wizard Rashid Khan produced one of the best bowling performances ever witnessed in the Big Bash. See the wickets here.

A six-wicket haul from T20 superstar Rashid Khan put Brisbane in a spin and lifted Adelaide off the bottom of the BBL ladder as the Strikers claimed a 71-run win over the brittle Heat at the Gabba on Wednesday night.

Chasing 162 for victory, Khan was on a hat-trick twice as he ripped the heart out of the Heat batting line-up with an imperious 6/17 off his four overs to help bowl Brisbane out for a paltry 90 in just 15 overs.

Watch every game of the KFC Big Bash League Live & On-Demand on Kayo or catch up for FREE with minis on Kayo Freebies. Join Kayo Now >

The Heat were 2/62 at the start of the ninth over with the white Kookaburra in the hand of Khan, in his last game before departing for international duties.

Three balls later, Brisbane was 5/62 and the match was as good as over with Brisbane’s finals hopes taking a major hit along the way.

First to go was keeper Lachy Pfeffer who was run out after a mix-up with Englishman Ben Duckett.

Sam Heazlett was dismissed for a golden duck the next ball after he edged Khan to keeper Harry Nielsen. Jake Lehmann had his stumps disturbed the very next ball.

He then tore through the tail to produce just the third six-wicket bag in BBL history.

After Duckett played on from off spinner Matt Short, the Heat were languishing at 6/67 but the damage was done by Khan who ripped the heart out of the Brisbane line-up that was bolstered by the return of a host of players sidelined by Covid including Chris Lynn who misfired again.

The Heat have now slumped to a 3-8 record while the Strikers have catapulted into contention for the finals after collecting the maximum four competition points.

Earlier, the Strikers got to 4/161 with Jake Weatherald (35 off 31) topscoring for the visitors who were sluggish through their middle overs before Jono Wells (24 off 23), Tom Kelly (24 off 16) and Khan (16 off four) finished with a flourish.

The Strikers batting line-up was weakened pre-match by the loss of Matt Renshaw (Covid) who kept himself busy by taking charge of Adelaide’s Twitter feed.

Another chance to return to his former glory, another disappointment for the Heat’s Chris Lynn to continue his below-par summer. The acting captain was dismissed for just seven runs off seven balls with six of those runs coming from a top edge off a wild swing. The Heat needed Lynn to bat long and take the game deep, chasing 162 for victory. But he was gone in just the third over – bowled by Henry Thornton – after clearing his left leg and trying to smash the ball into the East Brisbane State School playground. His departure left the Heat floundering at 2/17 after 14 balls.

RASHID WITH BALL AND BAT

Khan was sent in at the fall if Adelaide’s third wicket as the pinch-hitter and had the maximum and immediate impact. He hit two sixes off his first two balls from Heat paceman Xavier Bartlett with a wild swipe for a top edge over the keeper’s head followed by a towering strike straight down the ground. After racing to 13 off three balls, his fellow Afghanistan spinner and Heat star Mujeeb Ur Rahman claimed Khan’s scalp with a delivery that was speared down legside but ricocheted off the pads and onto the stumps.

HEAT SET TO BE BOLSTERED

Brisbane are set to complete their regular season with a clash against the Sydney Sixers in Melbourne on Monday. The match was originally programmed for the Gold Coast on January 4 but was postponed due to Heat players getting Covid. Brisbane expect captain Jimmy Peirson, Mark Steketee, Jack Wildermuth and James Bazley to have shaken off the virus in time to be available for selection against the Stars in Melbourne on Sunday.

Strikers opening batter Matt Short was in the wars during his short but productive stint at the crease. Early in his knock he copped a ball in the calf after the Heat took a quick shy at the stumps. An over later, there were genuine concerns for his wellbeing after a full-blooded throw from Nathan McSweeney thundered into Short’s left arm as he completed a quick single. He received medical attention as the game was delayed by several minutes before he batted on.