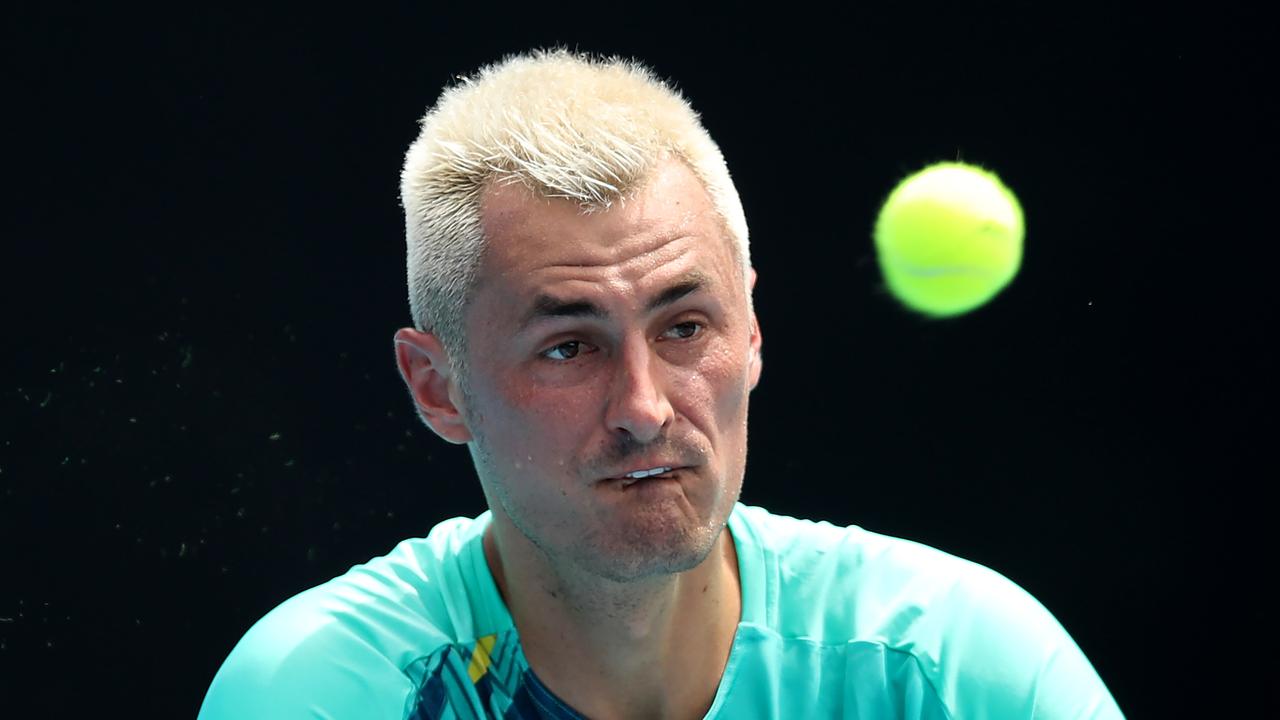 There’s probably only one person on the planet who thinks world No. 260 Bernard Tomic will win Wimbledon — and it’s the man himself.

Bernard Tomic was knocked out in the first round of the Australian Open qualifiers this week, but the 29-year-old is adamant he can still win a Wimbledon title one day.

The Australian tennis star made headlines in 2011 when he reached the quarter-finals at SW19 as a teenager, becoming the youngest player since Boris Becker in 1986 to achieve the feat.

He was defeated by eventual champion Novak Djokovic in four sets, but Tomic’s golden run turned plenty of heads.

Unfortunately, the Aussie hasn’t advanced to the quarter-finals of a grand slam tournament since, failing to progress to the fourth round of a major in nearly six years.

Tomic sits at No. 260 on the ATP world rankings and his off-court behaviour has drawn more attention than his actual tennis in recent years.

But despite the career slump, Tomic is still targeting a Wimbledon triumph.

He elaborated in an interview with the Sydney Morning Herald: “Time is running out. I’ve realised I need to snap out of it and get back to the sport, finish it off the right way and retire happy. Guilt free.

“There are so many things I could have done. I could have won Wimbledon in my career. But I know I can do it. There’s a window coming in the next five or six years before I retire and I’m going to do it. I’ve got my eyes on it and I will do it.

“To have that talent there and not fulfil your potential, it’s going to hurt me when I do retire. I want to do this for myself. Not for you, not for my father, not for anyone. But to prove to myself that I could have done this. This is rock bottom. There’s only up from here.”

Tomic also admitted he was “still scared” of his father John — who was also his coach for most of his career — in the wide-ranging TV interview ahead of the Australian Open. He claimed his father “whacked balls at me, rackets and stuff” and that he was “a crazy man”.

“Growing up was just tennis, tennis, tennis,” Tomic said. “That’s the only thing I knew. I was breathing tennis, sleeping tennis and working very hard. People don’t see the work I put in, the blood, sweat and tears. I was on court 8-10 hours a day, at a young age, when I was 10 years old.

“Obviously there a lot of stuff I would change there as a father, as a son. I wouldn’t want to raise my kids the way I was raised. I mean, you live and learn. I have learnt a lot from my father, don’t get me wrong.”

Tomic is isolating after receiving a positive test result for Covid-19 following his colourful return to the court, which ended inside an hour on Tuesday.

After a summer filled with promises about re-dedicating himself to tennis, Tomic ran into a no-frills Russian opponent Roman Safiullin, who was in no mood to give the Australian a leg-up.

Safiullin, the world No. 146, breezed into the second round of Australian Open qualifying 6-1 6-4 at Tomic’s expense, perhaps ending the prospect of us seeing more dramatic social media content.

Tomic fell apart in the opening set, losing in 23 minutes, and entered into a colourful exchange with the chair umpire shortly afterwards at the change of ends.

He seemed convinced he would soon test positive for Covid-19, and refused to do any post-match interviews because of his on-court comments.

“I’m sure in the next two days I’ll test positive, I’m telling you,” Tomic said to the umpire.

“I’ll buy you dinner if I don’t test positive in three days. Otherwise you buy me dinner.

“I cannot believe nobody’s getting tested. They’re allowing players to come on the court with rapid tests in their room. Come on.