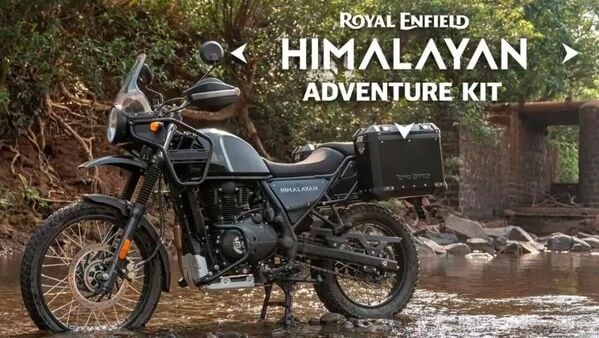 Royal Enfield has introduced a new Black Series Adventure Kit for its much popular Himalayan ADV in the Australian market.

Royal Enfield has introduced a new Black Series Adventure Kit for its much popular Himalayan ADV in the Australian market. The new kit is said to be offered at a steeply discounted price and includes a range of accessories such as a pannier mounting kit, aluminum panniers, engine guard, handguards, master cylinder guard, and oil cooler grill. These accessories have been aimed to amp up the off-roading and touring capabilities of the Himalayan ADV.

All the accessories offered within the Black Series Adventure Kit come in a matte black finish that lends a rugged appeal to these parts. This kit has been priced at $1,445 USD which is equivalent to ₹1,08,375, but under the end-of-fiscal-year deal, the pricing has been taken down to $925 USD or ₹69,375.

In related news, Royal Enfield is developing a new Himalayan 450 that will be a torchbearer in the popular ADV model lineup. Only a few months back RE started road testing the Himalayan 450 and the prototype of the same has also been spied rolling on public roads. This is also most likely to use a new and bigger displacement powertrain that will deliver an overall power in the vicinity of about 50 bhp, and the transmission duties are likely to be performed by a 6-speed gearbox.

Meanwhile, only recently Royal Enfield announced the launch of the new Classic 350 and Meteor 350 motorcycles in the market in Malaysia. These are one of the most selling models in the Indian market and the Chennai-based two-wheeler manufacturer aims to replicate this success overseas as well.