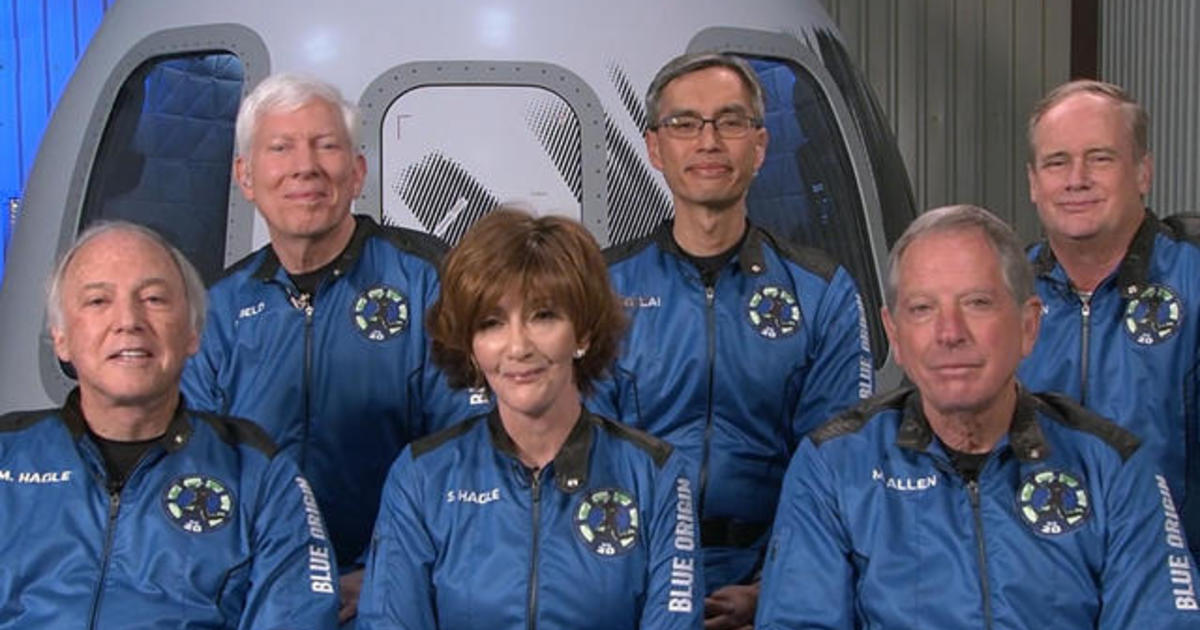 Jeff Bezos’ Blue Origin is gearing up to launch its fourth crewed New Shepard flight Tuesday — a 10-minute rocket-powered thrill ride to the edge of space and back carrying five wealthy space tourists and the spacecraft’s chief designer.

Gary Lai, one of Blue Origin’s first employees and the architect of the New Shepard program, was added to the crew in place of comedian Pete Davidson after a launch delay and schedule conflict forced the “Saturday Night Live” star to withdraw. Blue Origin did not reveal what caused the delay or what might have been needed to correct the issue.

But for Lai, riding into space on a rocket he helped design, will give him a chance to personally evaluate “the safest human spaceflight vehicle ever designed or built or operated.”

“We are going to ramp up operations,” Lai told CBS News before the first crewed flight of a New Shepard capsule in 2019. “We’re going to have dozens and eventually hundreds and thousands of astronauts, we hope, fly on New Shepard.”

Like all New Shepard flights, the single-stage booster will propel the crew capsule out of the lower atmosphere to to an altitude of about 65 miles — just above the internationally recognized “boundary” of space — giving the passengers three to four minutes of weightlessness before plunging back into the lower atmosphere.

Mission duration from launch to a parachute-assisted touchdown: about 10 minutes.

Joining Lai for the sub-orbital flight will be philanthropists and space enthusiasts Marc and Sharon Hagle; University of North Carolina professor and entrepreneur Jim Kitchen; George Nield, president of Commercial Space Technologies and a former manager with NASA and the FAA; and “angel investor” Marty Allen.

Blue Origin and its customers do not discuss the cost of a New Shepard seat, but prices are thought to be in the half-million-dollar range if not higher. Lai, as a company employee, presumably is flying at no charge.

The launching will mark Blue Origin’s 20th New Shepard flight and its fourth with passengers on board.

Davidson, like Strahan, Churchley and Shatner before him, was invited to fly in what amounted to savvy marketing that guaranteed widespread media coverage. How coverage of the NS-20 flight will fare in the wake of Davidson’s withdrawal remains to be seen.

Virgin has launched four piloted flights of its winged spaceplane VSS Unity, most recently sending up Branson, two pilots and three company crewmates last July 11. It’s not clear when the company will stage its next flight, but three researchers will be on board representing the Italian air force. Commercial passenger flights are expected to begin late this year.

Blue Origin followed up the Bezos flight by launching a suite of NASA experiments on an unpiloted mission August 26. Then, on October 13, Shatner and three crewmates were launched on the company’s 18th flight overall and the second carrying passengers. Strahan and his crewmates followed suit on Dec. 9.

Bill Harwood has been covering the U.S. space program full-time since 1984, first as Cape Canaveral bureau chief for United Press International and now as a consultant for CBS News. He covered 129 space shuttle missions, every interplanetary flight since Voyager 2’s flyby of Neptune and scores of commercial and military launches. Based at the Kennedy Space Center in Florida, Harwood is a devoted amateur astronomer and co-author of “Comm Check: The Final Flight of Shuttle Columbia.”