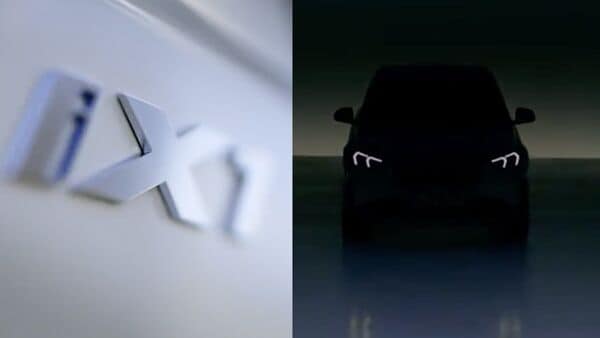 BMW iX1 electric SUV, which is basically the electric version of the X1 SUV, will be powered by two electric motors and claims to offer range of up to 438 kms on a single charge.

BMW is all set to take the covers off the upcoming iX1 electric SUV. The German carmaker has teased how the EV will look through a teaser video a day before the iX1 is officially unveiled on May 31. The iX1 electric SUV, which is going to be the third electric SUV or crossover from BMW after the iX and iX3, is the electric version of the carmaker’s entry-level SUV X1.

The teaser video shows that the iX1 SUV will come with the typical BMW kidney grille. It will have the ‘i’ badging on the grille which establishes its EV credentials which will also be accentuated by blue accents. The teaser video also shows twin LED headlights and DRLs. At the rear, the SUV will get a prominent iX1 badging as well as LED taillights.

The interior of the new iX1 electric SUV will also be a premium place to be in. The highlight of the cabin could be the dual curved display seen inside other BMW electric cars like the iX or the i4.

The BMW iX1 is likely to be offered with both single motor and dual motor setup. The single motor unit, mated to a 32.6 kWh lithium-ion battery pack, is likely to produce output of 180 hp. The dual motor setup, which will come with a bigger battery pack, is expected to churn out maximum output of 250 hp. The BMW iX1 will come equipped with the German carmaker’s fifth generation eDrive technology.

The new BMW iX1 will feature a fully electric drive system. BMW mentioned that the fully electrically powered model will be based on a flexible vehicle architecture and will be produced on the same assembly line as the combustion-engined and plug-in hybrid variants. This upcoming electric SUV from BMW promises a range of 413 km to 438 km.