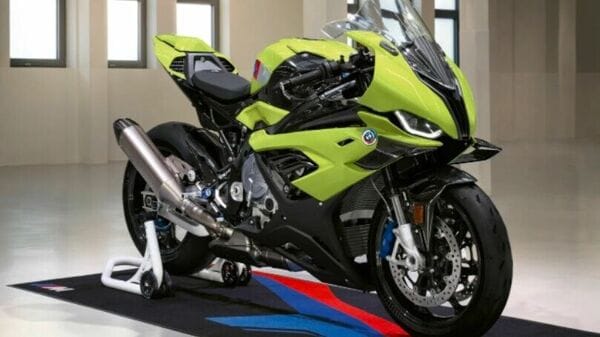 In terms of the exterior design, the new motorcycle carries on the same design as the standard M 1000 RR and looks almost identical, however, features a much exclusive exterior paint livery. The new special edition model comes with the ‘Competition’ package as standard, unlike the regular motorcycle which features the same as an optional fitment. This package consists of an aluminum swingarm, extensive carbon fibre work along with a digital code to unlock the onboard GPS data module.

At the heart of the motorcycle remains the same 999cc liquid-cooled in-line four-cylinder engine that has been rated to develop 210bp of maximum power and 113Nm of peak torque. The engine comes paired to a 6-speed transmission unit, and the special edition bike also features carbon fibre winglets as standard which further amps up its looks.

It gets the manually adjustable Marzocchi suspension and misses out on the semi-active suspension. Also, the choice of tyres (Dunlop SportSmart TT) has been carried over from the standard S 1000 RR motorcycle.

The bookings for the new model have already started from today (May 20th) in the international market. However, it is yet not confirmed if the bike will be introduced in the Indian market anytime soon. What’s worth noting is that it will be introduced at a fairly higher premium than the standard model.