Aamir Khan and Kareena Kapoor starrer ‘Laal Singh Chaddha’ trailer was launched on Sunday. As soon as the video was shared online, internet users started slamming the film’s lead actors. Netizens dug out old controversies of Aamir Khan and called a ban on the movie. 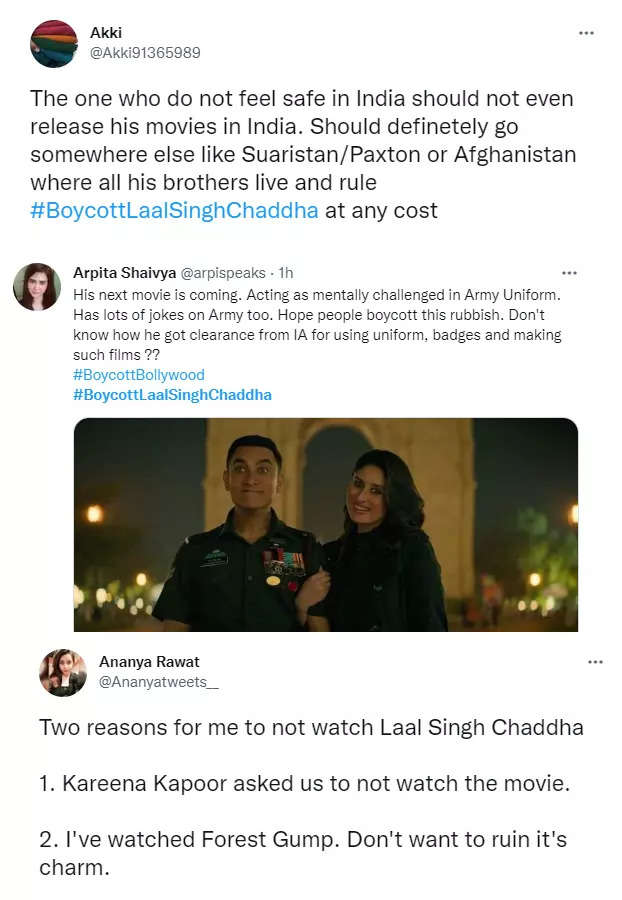 Recalling Aamir Khan’s ‘India is intolerant’ statement, one Twitter user wrote, “The one who do not feel safe in India should not even release his movies in India. Should definetely go somewhere else like Suaristan/Paxton or Afghanistan where all his brothers live and rule #BoycottLaalSinghChaddha at any cost.” Another netizen said Kareena’s comment on nepotism was a reason to boycott the film, “Two reasons for me to not watch Laal Singh Chaddha 1. Kareena Kapoor asked us to not watch the movie. 2. I’ve watched Forest Gump. Don’t want to ruin it’s charm.” One Twitter user also pointed out Army reference in the trailer and wrote, “His next movie is coming. Acting as mentally challenged in Army Uniform. Has lots of jokes on Army too. Hope people boycott this rubbish. Don’t know how he got clearance from IA for using uniform, badges and making such films ?? #BoycottBollywood #BoycottLaalSinghChaddha.”

Directed by Advait Chandan, ‘Laal Singh Chaddha’ has been written by Eric Roth and Atul Kulkarni. The film is an official adaptation of Tom Hanks’ Hollywood blockbuster ‘Forrest Gump’. This entertainer also marks the Bollywood debut of Nagarjuna’s son Naga Chaitanya. Shah Rukh Khan has also shot for a cameo in ‘Laal Singh Chaddha’. This film is slated for release on August 11.