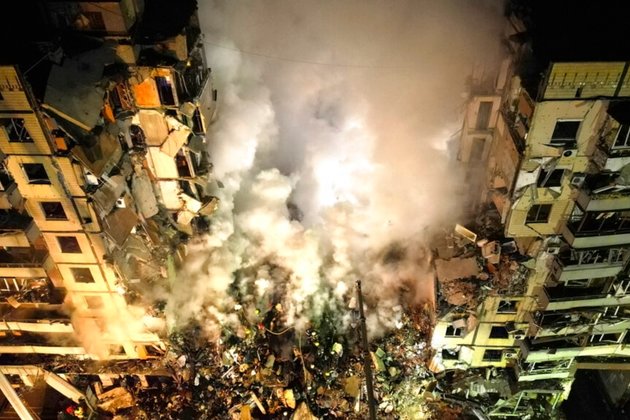 The Russian embassy said in its own statement that the tanks “are unlikely to help the Armed Forces of Ukraine turn the tide on the battlefield,” and would instead drag out the war.

At least 14 people were killed and 64 wounded, among them children, in the southeastern city of Dnipro. A Russian missile strike there destroyed a section of a nine-story apartment building, regional Governor Valentyn Reznichenko said. Infrastructure was also damaged in the Lviv, Ivano-Frankivsk, and Odesa regions, as well as in Kharkiv and Kyiv.

Targeting civilians and critical infrastructure across Ukraine has been a consistent tactic by Russia. According to the Geneva Conventions, targeting vital public infrastructure constitutes a war crime.

Zelenskyy said the death toll in Dnipro is expected to increase.

“Debris clearance is still ongoing and will continue throughout the night. It’s not yet known how many people are under the rubble. Unfortunately, the death toll is growing every hour,” he said. “My condolences to relatives and friends.”

Emergency workers clear the rubble after a Russian rocket hit a multistory building leaving many people under debris in the southeastern city of Dnipro, Ukraine, Jan. 15, 2023.

The strikes caused emergency blackouts in multiple regions, such as the Kharkiv region and the city of Kharkiv in the northeast – Ukraine’s second-largest city. In the western Lviv Oblast, the governor, Maksym Kozytskyi, said there might be interruptions in the power and water supply because of missile damage.

Another energy facility was hit in the western Ivano-Frankivsk Oblast, according to Governor Svitlana Onyschuk. A fire broke out at the site following the attack, Onyschuk said, adding there were no casualties.

Earlier, Odesa authorities said the missiles were launched “from air and sea,” while Southern Operational Command reported that five Russian missile carriers with a total of 36 Kalibr cruise missiles were detected in the Black Sea.

During the attack, a defiant Andriy Yermak, Zelenskyy’s chief of staff, said, “We will fight back.’

In the country’s Donbas, fighting continues to rage around Soledar, with Russia claiming to have captured the town and Hanna Malyar, Ukraine’s deputy defense minister, saying: “fierce battles for Soledar are continuing.”

Zelenskyy reiterated his pleas for more weapons from the West.

“What is needed for this? Those weapons that are in the warehouses of our partners and that our troops are so waiting for,” he said.

“No amount of persuasion or just passing the time will stop the terrorists, who are methodically killing our people with missiles, drones bought in Iran, their own artillery, tanks and mortars. The whole world knows what can stop and how it’s possible to stop those who sow death,” he said.

A few hours after Saturday’s missile strikes, Britain promised to send the Challenger 2 tanks to Ukraine to help the country repel Russia’s invasion.

Sunak’s office said the tanks would be sent into the country in the coming weeks along with about 30 self-propelled AS90 guns to follow. Training for Ukrainian troops will begin soon on how to use the guns and the tanks.

The Challenger 2 is Britain’s main battle tank. It is designed to attack other tanks and has been in service since 1994, according to the army.

Sunak and Zelenskyy spoke by phone Saturday, after which Zelenskyy turned to Twitter to thank the prime minister “for the decisions that will not only strengthen us on the battlefield, but also send the right signal to other partners.”

Some information for this report came from Agence France-Presse, Reuters, and The Associated Press.