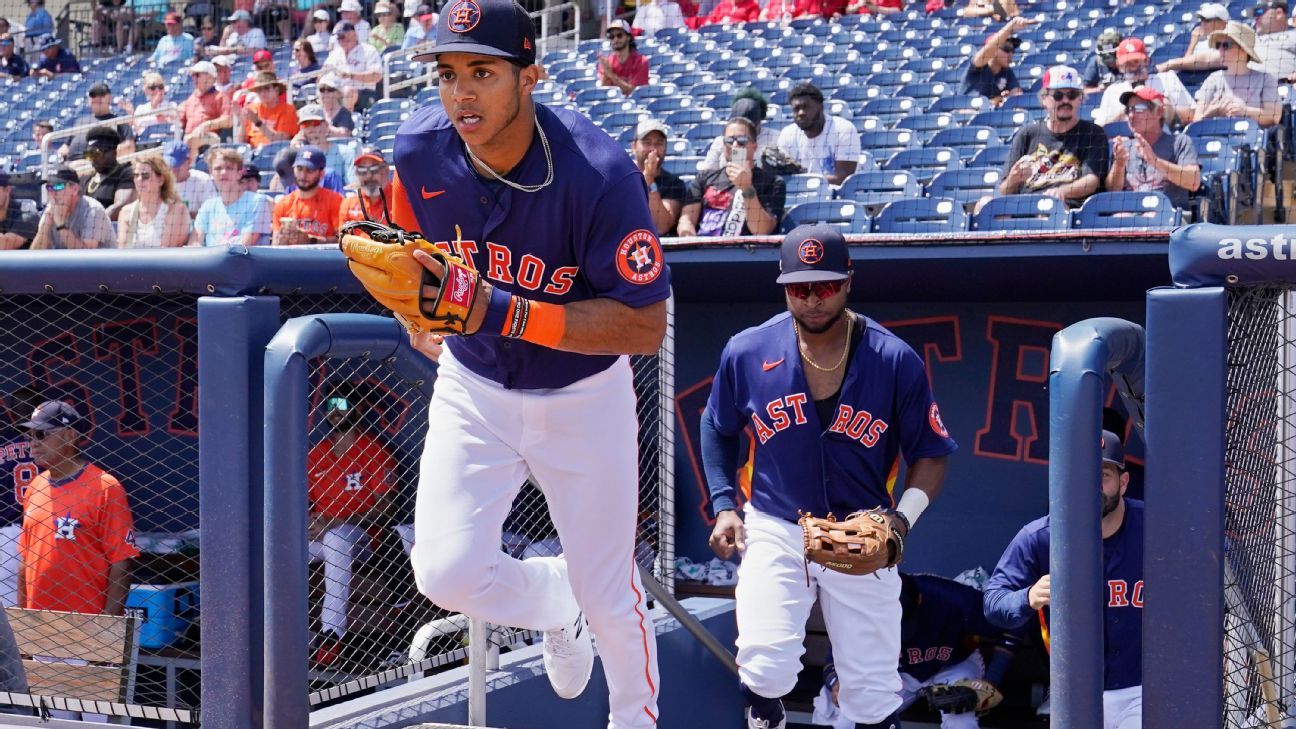 One reason the Houston Astros felt so comfortable in allowing longtime starting shortstop Carlos Correa to sign elsewhere this offseason is due to how confident they are in excellent prospect Jeremy Pena. Fantasy managers may not be thinking much about Pena, and ESPN Fantasy hardly ranks him as relevant for our game, but perhaps we should re-evaluate. Manager Dusty Baker has had Pena lead off in several recent games, including Sunday against Miami. In that game, he singled twice in three plate appearances and he was caught stealing.

Pena sure had an interesting 2021 season. He underwent wrist surgery in April and the organization initially said he might miss the entire season, but then he skipped Double-A and played 30 games for Triple-A Sugar Land, posting a .944 OPS with 10 home runs and five stolen bases. Pena also drew just six walks while striking out 35 times. This was not his offensive profile at Single-A ball in 2019. Pena muscled up and now looks like a power hitter with speed — perhaps very much like a young Correa? Hmmm, that should interest us, yes?

There was also a weekend story about Baker looking to move 2B Jose Altuve down from the leadoff spot down to No. 2, for the player’s comfort level, opening up opportunity for Pena or someone else to bat first. Look, Pena boasts a mere 133 plate appearances higher than Single-A ball, but if the Astros are convinced that an immediate star lurks, that matters. He has the shortstop job. He may lead off. He may be a potential five-category middle infielder. I have moved Pena into my top 250 for roto leagues. The upside is there and, if he struggles in April, you can move on. Still, his is a name we need to know right now.

As we wrap up this spring training weekend, here are others moving around in my rankings, mainly in deeper formats and based on news, for whatever reason. Try not to study the spring statistics too hard. Unless you are watching all of the spring games, which seems rather unlikely, batting average and ERA tells us little. Which pitchers are these hitters facing? Who are these pitchers striking out? There is no context here. Still, stuff is happening.

The 2022 fantasy baseball game is live! Get the gang back together, or start a brand new tradition.
Join or start a league for free >>

Arizona’s star: We all think Diamondbacks 2B/OF Ketel Marte is really good but he offered little for counting stats in 2020 (2 HR, 1 SB) and then he missed nearly half of last season with multiple hamstring injuries. I suspect I docked him in the roto rankings for both of these reasons. What if he does not steal bases? What if he cannot stay on the field? The Diamondbacks recently gifted him an impressive contract extension so I dug further into the player stats and remain perplexed. Marte is a wild card, with major upside but relatively disappointing over the last two seasons. Tristan H. Cockcroft ranks him considerably better in points leagues than I did in roto, but I feel a bit more confident today, so I moved him up.

White Sox DH role: Andrew Vaughn, the No. 3 pick in the 2019 amateur draft, surely is going to hit at some point, but the White Sox seem a bit cool on him for now. Vaughn posted a .705 OPS as a rookie, struggling versus right-handed pitching and, of course, his defensive role was mishandled and ridiculous. He is not an outfielder, but the White Sox deployed him this way due to team need. Vaughn hurt his hip making a diving catch this weekend, necessitating a cart to get off the field. We await further word. If Vaughn cannot play outfield and the White Sox platoon him at DH with Gavin Sheets — and this seems likely — then we are all over-drafting him, which stinks. Perhaps he plays first base in 2023 if/when Jose Abreu is elsewhere. Keep the faith in dynasty formats.

Cardinals DH role: Hey, it makes for a nice story that Albert Pujols is returning to the St. Louis Cardinals for one final hurrah in order to handle the left-handed pitching in the DH role, but for those in deeper formats it is not good for Corey Dickerson and his plate appearances. Dickerson hits right-handers well, usually. Pujols slugged 13 home runs just off left-handed pitching last season, with a .939 OPS, so it is definitely a situation to consider in daily formats, DFS, and deeper formats — but not so much for ESPN standard.

Blue Jays leadoff hitter: Many of us were wary of Blue Jays IF/OF Cavan Biggio entering last season, for his hard-hit metrics did not impress and he looked like a versatile walker with little else to offer. He was an efficient base stealer, but not a volume one. Surely he was a more attractive investment in points leagues than in roto. Biggio still is, but if he settles into the leadoff spot against right-handed pitching (which sure seems plausible since it is happening in spring games), and most everyone else is set, then sign me up. Biggio is currently 3B-only, but expected to handle second base platooning with Santiago Espinal. This is a monster lineup and both Biggio and Espinal could matter.

Miami closer: Reported incumbent closer Dylan Floro (who is nothing special, by the way) is dealing with arm soreness and is likely to miss the start of the season, at the least. Anthony Bender is 27 and coming off a solid rookie season, and most people think he will get the saves. He probably will. Just throwing this out there: Anthony Bass saved games for Seattle in 2019 and Toronto in 2020, and he led the Marlins with 19 holds just one season ago. Bender may be better, but it hardly means he gets the saves. I think at this point I may just ignore Miami’s bullpen in standard formats.