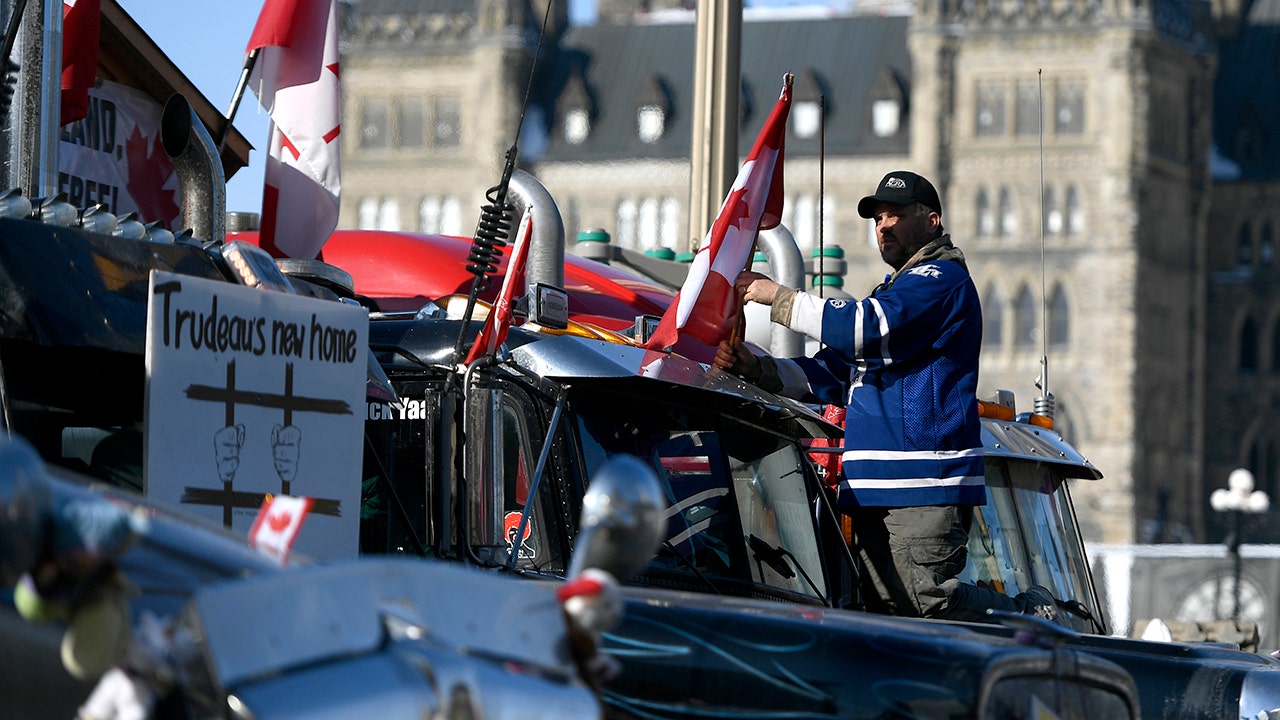 The family of a Canadian great-grandfather who was stopped for “unnecessary noise” in Ottawa because he honked his horn in support of protesting truckers say a police officer who arrested him was overly aggressive Sunday, according to reports.

“I meant no harm,” Gerry Charlebois told the Toronto Sun. “I just gave the trucker a thumbs-up and a honk. I’m so sore. It hurts so much.”

Canadian truckers with the “Freedom Convoy” have been driving across Ottawa protesting the government’s vaccine mandate for cross-border truckers.

Video of the incident appears to show an officer grabbing Charlebois’ arm and pushing him against his van to handcuff him. Charlebois appears to be resisting at times, according to the video. At one point he gets partially down on the ground but it’s unclear if the officer pushed him or if he lost his balance. He was then taken away in handcuffs by two officers.

A protester affixes a flag to the top of a truck, parked beside another with a sign calling for the jailing of Prime Minister Justin Trudeau, outside Parliament Hill, as a protest against COVID-19 restrictions continues into its second week in Ottawa on Monday, Feb. 7, 2022. (Justin Tang/The Canadian Press via AP)
(Justin Tang/The Canadian Press via AP)

The arrest came after a several-minute verbal altercation between Charlebois and the first officer while he was attempting to get his license from the trunk of his minivan.

Charlebois admitted he swore at the officer but said he supports law enforcement. “I was just upset with him,” he said.

“He wouldn’t hurt anybody,” his son told the Sun. He added they may need to take Charlebois to the hospital because he’s having problems with his shoulder and his arm.

“They didn’t seem to arrest any of those big truckers like that,” his other son said. Charlebois is under five feet tall.

While the convoy has been mostly peaceful, the truckers have been accused of blocking traffic and disturbing residents with constant honking.

“ATTENTION DEMONSTRATORS: @OttawaPolice will enforce an order prohibiting anyone from using air horns or train horns for any street north of Hwy 417 until February 16th, 2022 or any other date set by the Court,” the Ottawa Police tweeted this week. All officers have been prepped on the terms of the order. Anyone in violation of the terms may be subject to detention or arrest.

Last weekend, police ramped up their enforcement and began ticketing protesters but Charlebois made it clear he wasn’t a protester. He said he had only gone into the protest zone because he was curious. He says he is vaccinated.

He didn’t face criminal charges but was given a $118 bylaw ticket for “unnecessary noise,” the Sun reported.

On Monday, an Ottawa judge ordered the truckers to stop honking for 10 days. “Tooting a horn is not an expression of any great thought I’m aware of,” Judge Hugh McLean said in his decision, according to BBC News.