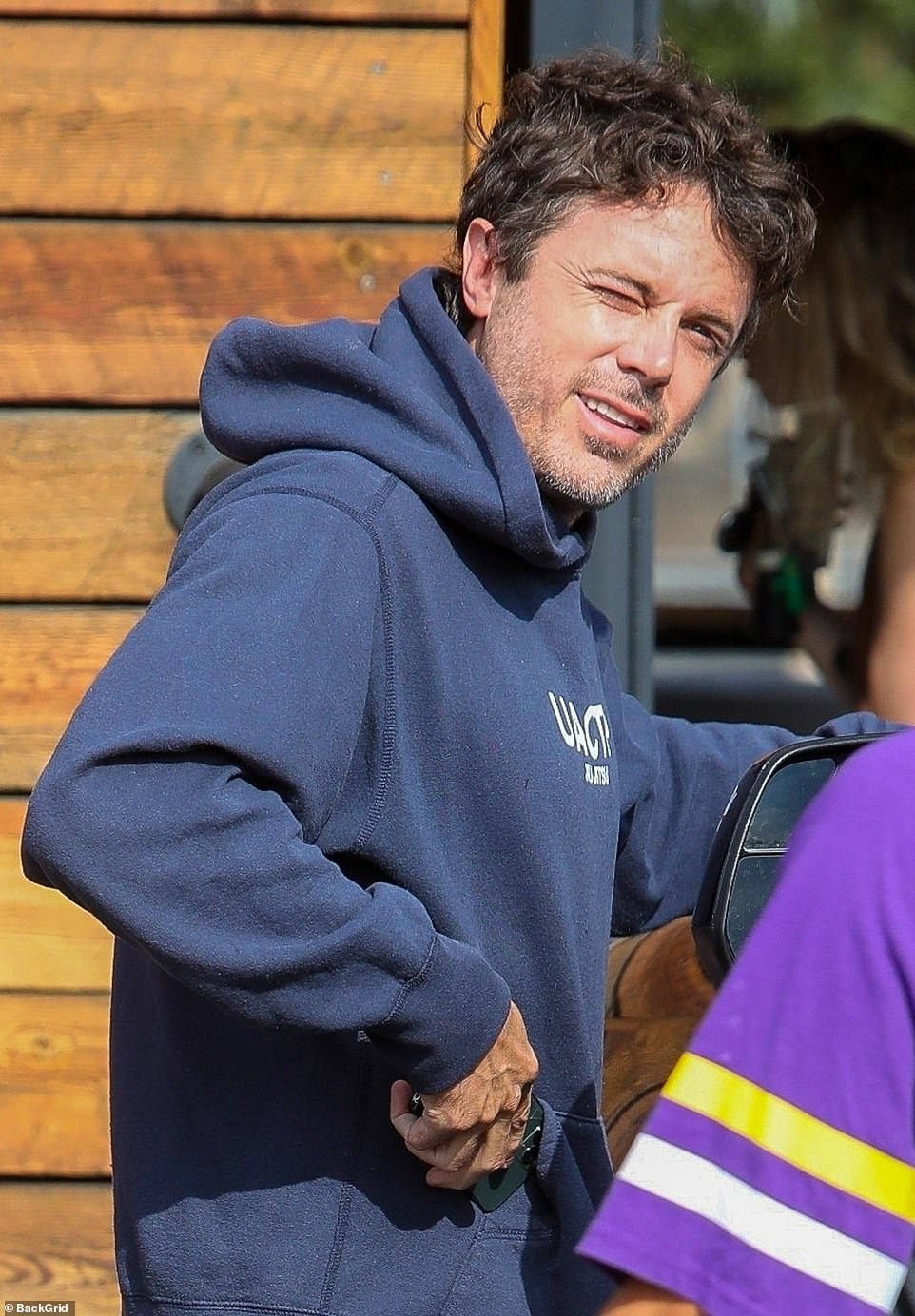 A source close to the actor, 47, told People magazine Casey was stuck in LA Saturday ‘unfortunately because of family, parental obligations at home.’

No further detail was given, and it is unclear if Casey was referring to his parents, or the two sons he shares with ex-wife Summer Phoenix. The Afflecks’ mom Chris is at the nuptials in Georgia, but it’s unclear whether their father Timothy is also attending.

Casey and Phoenix are parents to 18 year-old Indiana August, and 14 year-old Atticus.

Earlier on Saturday, appeared sheepish when approached on a morning coffee run in LA by TMZ.

He told a reporter that he has ‘other things’ to do.

Asked why he wasn’t at his brother’s wedding, Casey mumbles something that sounds like he says ‘I have other things to do,’ then would not clarify whether that was what he said.

The younger Affleck brother, 47, looked comfortable in a pair of baggy jeans and blue hoodie, and even smiled for the camera as he picked up a cup from Starbucks and took a call on his cell phone.

It is unclear why Casey appeared in no rush to make it for his brother’s big day — or to his mother, who was rushed to the hospital from Ben’s Georgia estate yesterday after she reportedly fell off a dock and cut her leg.

Casey’s presence in LA is especially puzzling as the brothers are well known for being close and have worked together on a number of movies across both of their Hollywood careers.

There’s no suggestion of any rift between the siblings, who have always been publicly supportive of one another.

Despite his appearance in LA on the same day his brother is set to say his vows to Lopez — once again, Page Six previously reported Casey would in fact be attending the wedding.

Casey Affleck was spotted leisurely buying a cup of coffee in Los Angeles this morning, despite the fact that his brother Ben will be tying the knot with Jennifer Lopez about 2,500 miles across the country in Georgia this evening 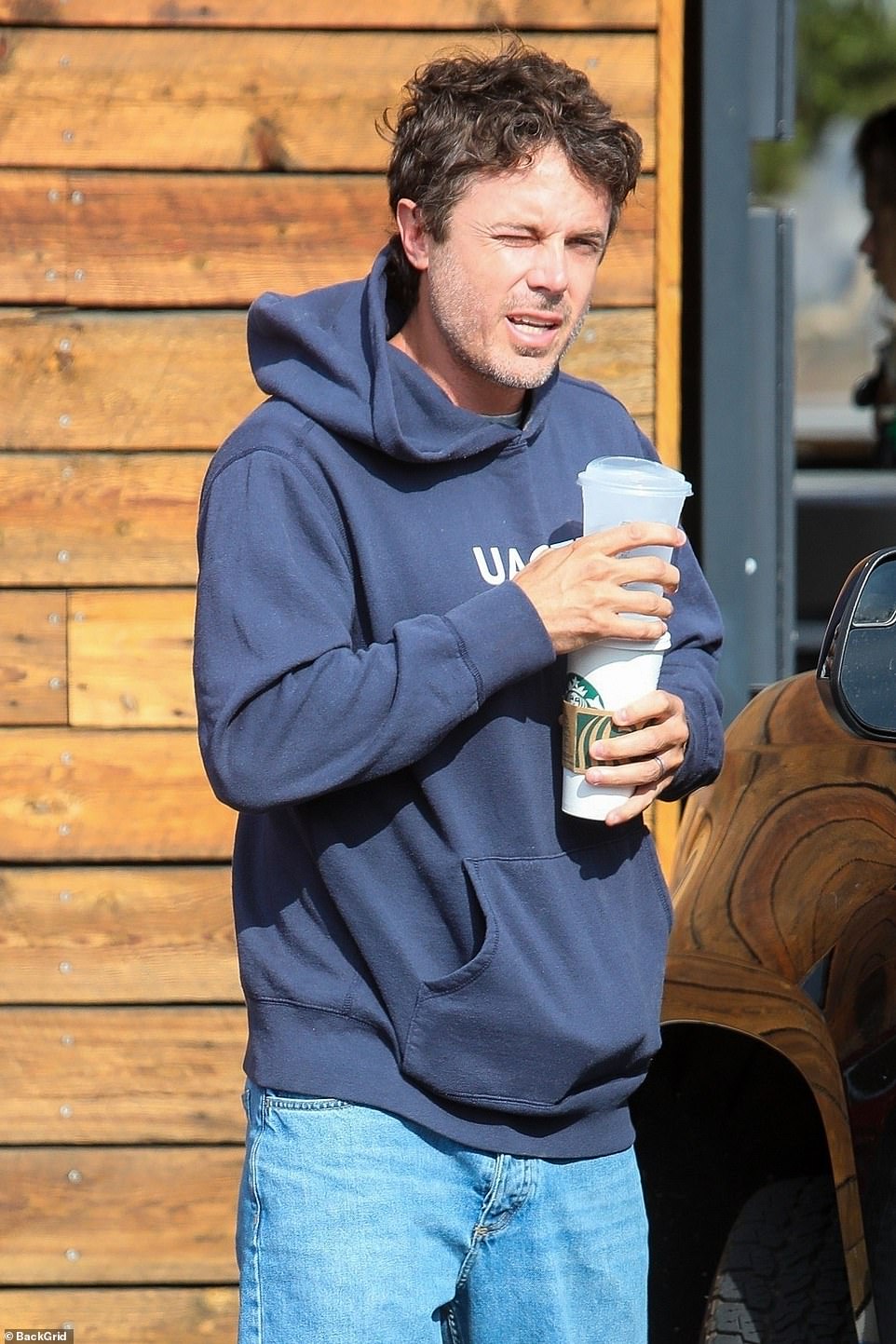 It is unclear why Casey appeared in no rush to make it for his brother’s big day, even as their mother was rushed to the hospital from Ben’s Georgia estate yesterday after she reportedly fell off a dock and cut her leg

As guests flocked to Georgia for Ben and Jennifer’s wedding this week Casey appeared to be comfortable in LA.

He was spotted on Thursday night taking his girlfriend Caylee Cowan, 24, out on the town on Thursday evening.

The couple celebrated Noah Tepperberg’s birthday at LAVO Restaurant, where they were spotted sharing a smooch.

Casey had ample time to book a flight to Georgia for his brother’s wedding, as the event has been in the works for four months.

The odd behavior isn’t Casey’s first scrape with controversy, as he made headlines over the years for a pair of sexual harassment allegations from female co-workers.

He was sued by two women who worked on his 2010 mockumentary comedy-drama I’m Still Here, which documented former brother-in-law Joaquin Phoenix’s transition from acting to hip-hop. One of the films producers claimed ‘sexual harassment’ and ‘breach of oral contract.’

Both suits were settled out of court for an undisclosed sum of money. After the allegations against Affleck came out, two other women employed on the set of I’m Still Here defended his conduct on set, insisting they had never seen anything out of the ordinary.

In 2019 he publicly owned up to his behavior towards the women, saying he tolerated and contributed to an unprofessional environment, due in part, to a lot of partying on set. ‘I think it’s a lesson that I had to sort of learn and be humble about; I was the producer. I was technically the boss.,’ he said. 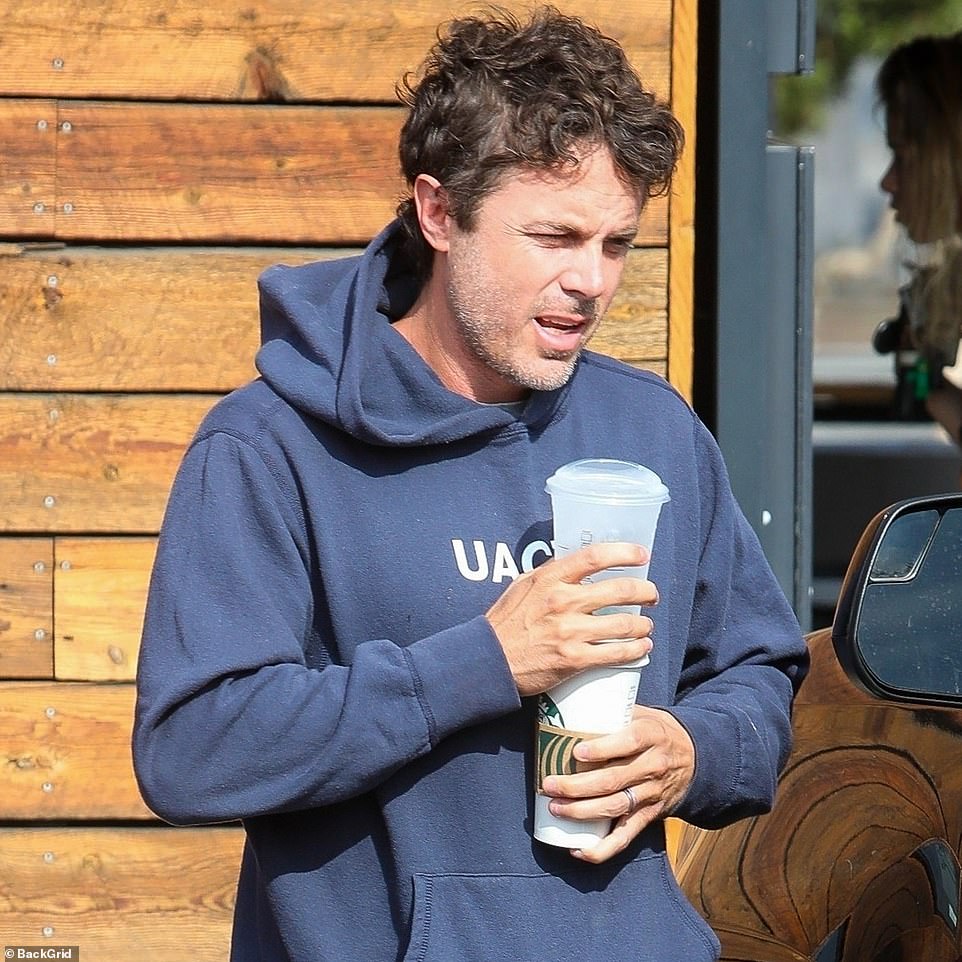 Casey Affleck was spotted carrying a pair of cups from a Starbucks in Los Angeles on Friday morning. He appeared to tell a photographer he had ‘other things’ to do and wouldn’t be able to make his brother’s wedding 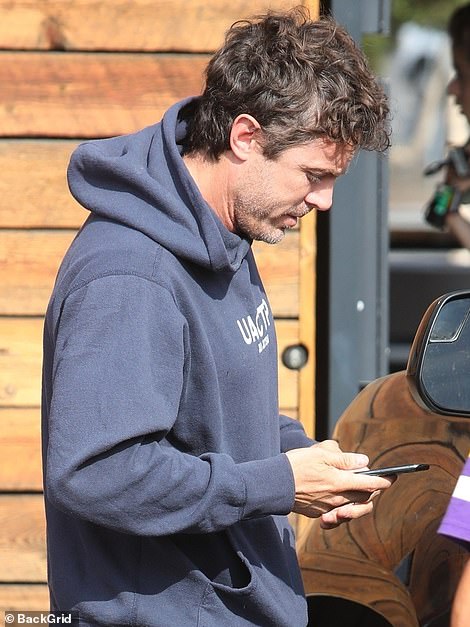 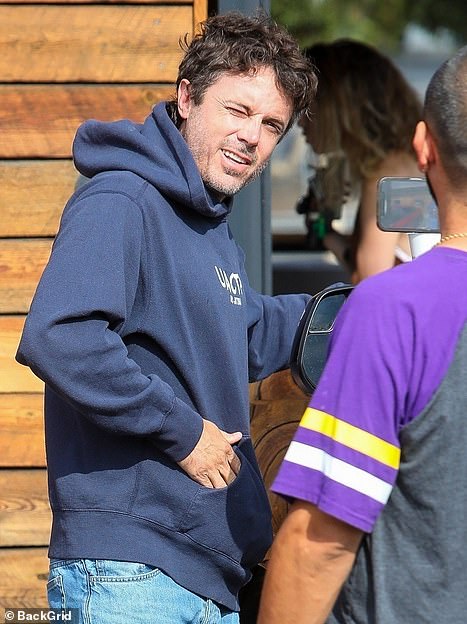 Casey Affleck taking a look at his phone as he picks up a cup of coffee in Los Angeles this morning, the same day his brother is due to marry across the country in Georgia 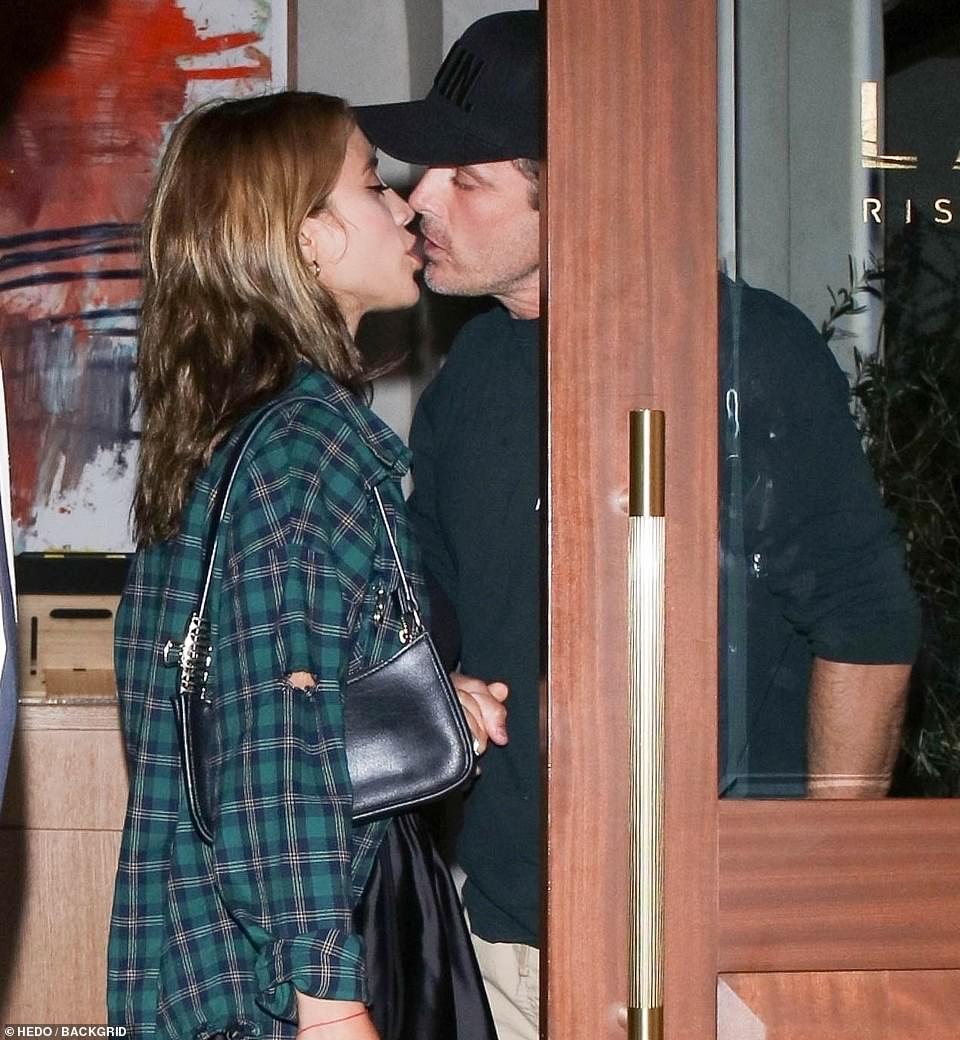 Kiss me! Casey Affleck was all about his girlfriend Caylee Cowan as he enjoyed a night out in West Hollywood on Thursday evening

The celebrity couple are set to hold their second wedding ceremony with loved ones on Saturday at Affleck’s estate in Riceboro, a month after they secretly wed in a small Las Vegas service.

Large security gates were installed at the end of the four-mile road down to Affleck’s sprawling country estate several weeks ago.

Today a police car sits on the gates, while guards busily handed out wrist bands to all guests, their names checked and double-checked against the ‘Master Production’ list.

DailyMail.com has learned that an explosives permit for a fireworks display has been quietly secured with Affleck’s plantation style home at its epicenter.

Low flying aircraft, like drones and helicopters, have been warned not to fly within a three-mile radius of the venue due to the large fireworks show that is expected to close out the evening.

Meanwhile, the river onto which the property backs is being patrolled by security boats. 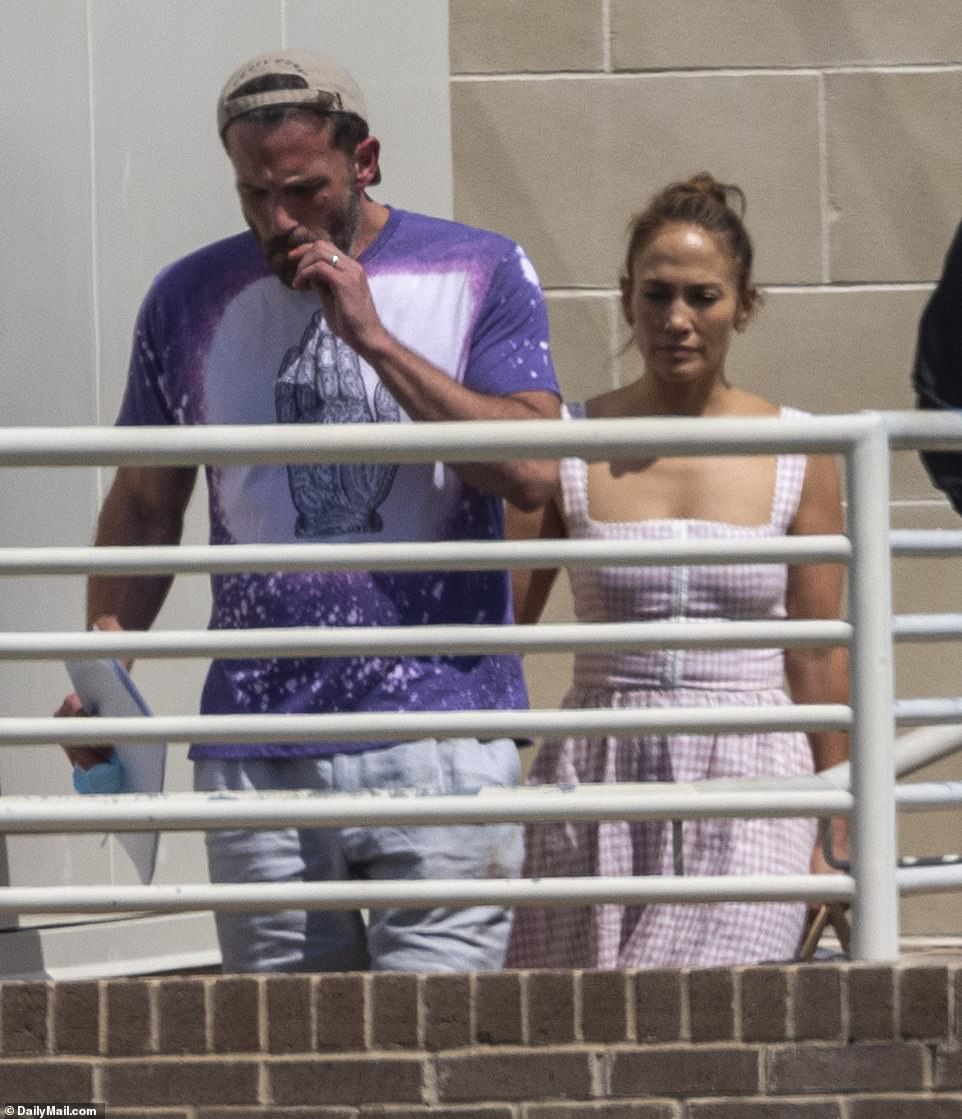 Exclusive pictures obtained by DailyMail.com show Jennifer Lopez and Ben Affleck at the hospital Friday afternoon as Ben’s mother received stitches after an accident at her son’s Georgia estate 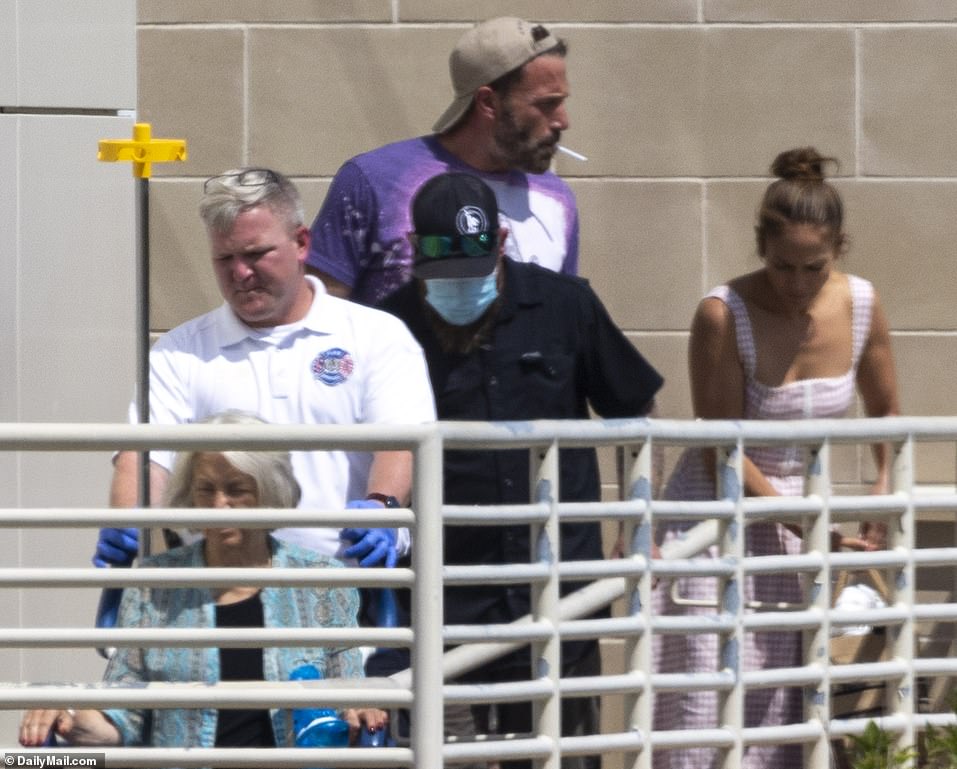 Exclusive pictures obtained by DailyMail.com show Jennifer Lopez and Ben Affleck arriving at a hospital yesterday afternoon as Ben’s mother received stiches after an accident at her son’s Georgia estate.

A source told DailyMail.com that Ben’s mother, Christopher Anne Boldt, fell off a dock and cut her leg at the Riceboro property. Ben reportedly found her and called the ambulance.

J.Lo arrived carrying a Dior bag, downcast and wearing a summer dress after the medical emergency at the property where she and Ben are celebrating their lavish wedding this weekend.

Meanwhile Affleck could be seen pacing and smoking a cigarette outside the building, casually dressed in a T-shirt and shorts, his baseball cap worn backwards.

A source told DailyMail.com that the incident was ‘not serious.’

But in dramatic scenes witnessed by DailyMail.com, the ambulance sped into the Riceboro property around noon, spending twenty minutes on the property before the Liberty County Medical Center vehicle sped north.

At times the ambulance reached more than 120mph as it flew down the highway under police escort. 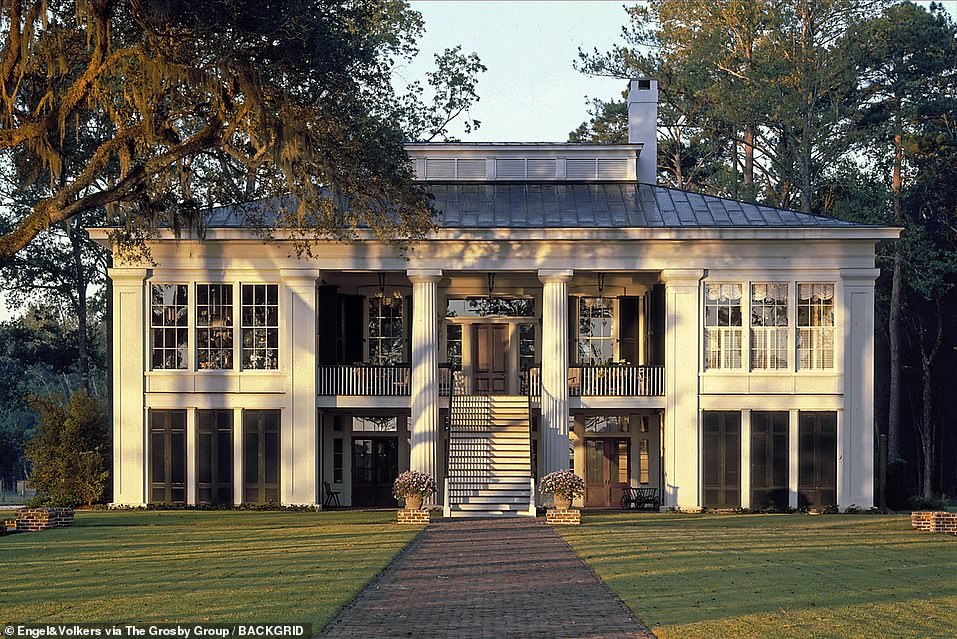 The main ‘big house’ mansion is the centerpiece of the property and boasts 6,000 square feet of space 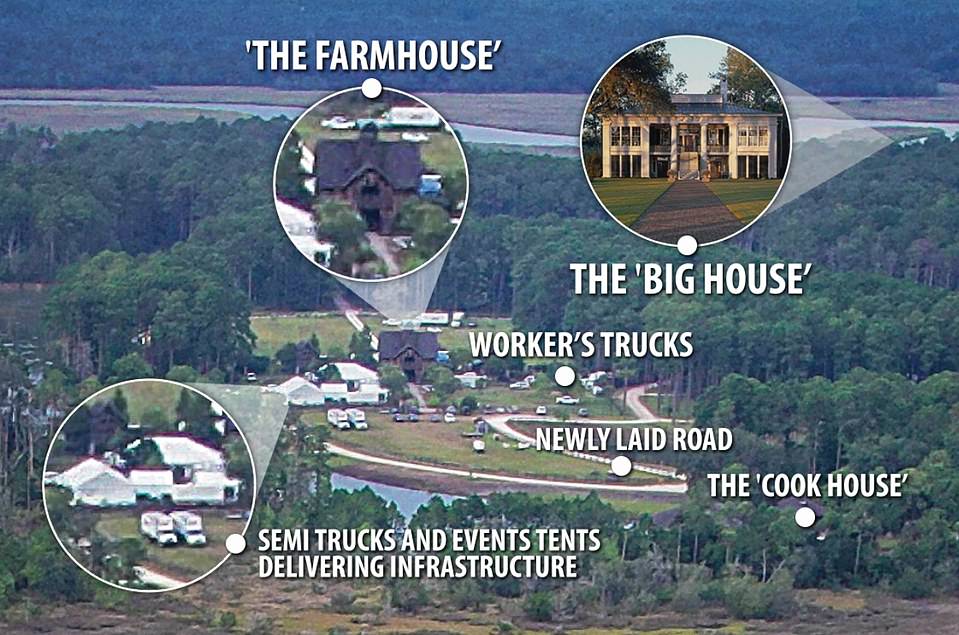 An overview of the wedding preparations shows the sprawling, wooded island filled with trucks and tents

As Ben and Jennifer prepare to say ‘I do’ for the second time, all eyes are on Affleck’s gorgeous mansion in Georgia that he first bought for $7.1 million in 2003.

While Affleck recently put the sprawling 87-acre property up for sale for $8.9 million, he ultimately decided to keep the home and use it for a glamorous wedding ceremony with beau Lopez.

The two will have their wedding ceremony today, a massive $400,000 affair that involved months of preparation, including installing dancefloors and shipping in glassware, linens and furniture.

The house, built in 2000, is an ‘imitation plantation’ mansion in Riceboro, Georgia that overlooks the North Newport River on the private Hampton Island.

The main ‘big house’ mansion is the jewel of the property and boasts 6,000 square feet of space, four bedrooms, five bathrooms and balconies that overlook the swampy river.

The property was originally home to a ‘thriving’ rice plantation known as Hampton Pastures and was owned by Roswell King. The plantation was operated by slaves before the civil war. 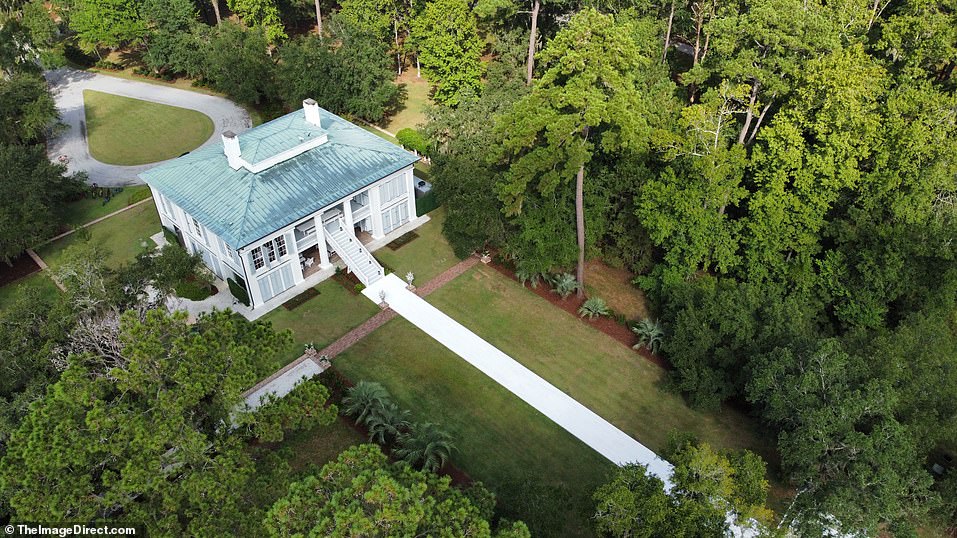 A white walkway has been set from the rear veranda of the Big House down to the water, where a marquee has been installed. 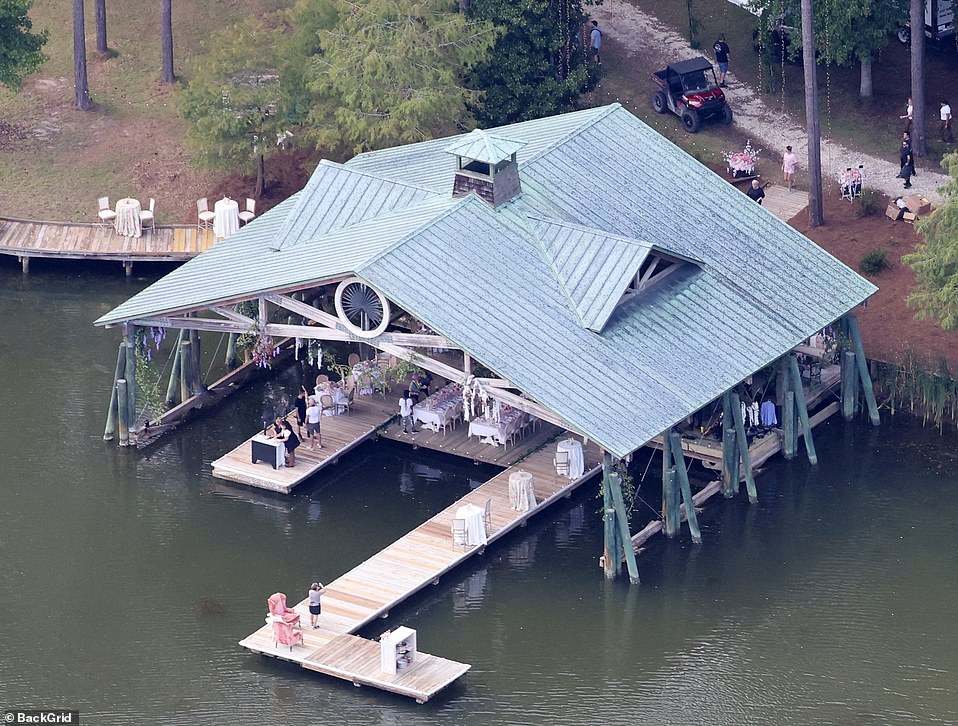 The pair have already faced some unplanned issues with the wedding preparations, including when Affleck’s mom, Christopher Anne Boldt, fell from the dock and was rushed to hospital with an arm injury

The venue choice raised some eyebrows as Affleck learned in 2015 that his ancestors once owned a host of slaves at a farm just north of the property in Savannah.

Affleck learned of his family’s sordid past when researchers for the PBS show Finding Your Roots found extensive evidence that the actor’s great-great-great grandfather, Benjamin Cole, owned between 25 and 31 slaves at a Savannah farm around the 1850s through the Civil War.

Affleck landed in hot water at the time when leaked emails revealed he implored the show to cut a segment of the episode where he was told about his family’s slave owning past. The show consented, and instead focused on his mother’s history as a freedom rider during the Civil Rights movement. Affleck later apologized for the cover-up.

‘I didn’t want any television show about my family to include a guy who owned slaves. I was embarrassed. The very thought left a bad taste in my mouth,’ he wrote in a Facebook post,  ‘I regret my initial thoughts that the issue of slavery not be included in the story. We deserve neither credit nor blame for our ancestors and the degree of interest in this story suggests that we are, as a nation, still grappling with the terrible legacy of slavery.’

Transcript from the cut segment showed Affleck said the news of his family past gave him ‘a sagging feeling,’ while the show’s host pointed out the irony that 100 years after his family owned salves his mother was putting her life on the line for black rights.