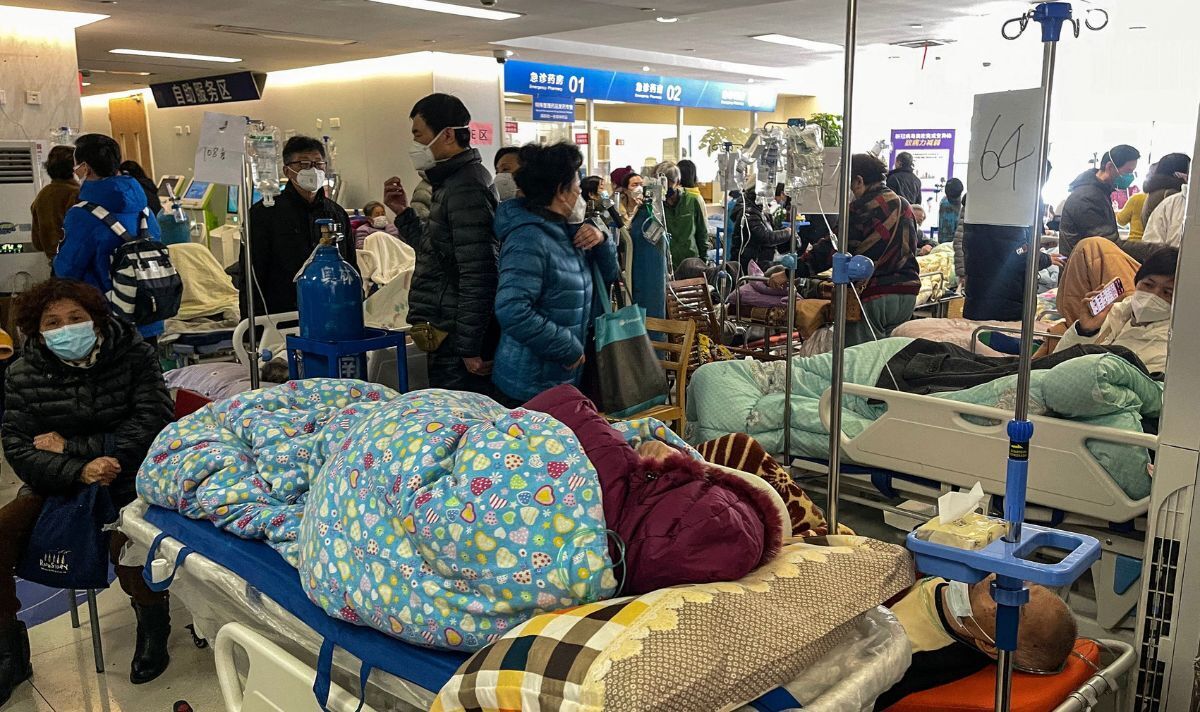 Coronavirus: UK to impose screening on travellers from China

Beijing has criticised the dozen-or-so countries — including the UK and US — which have announced they will be imposing Covid-related travel restrictions on visitors from China, warning it might take “countermeasures” in response. This is despite surging infections across China following the country’s abandonment of their previous “zero-Covid” policy. Case numbers have been particularly high in Shanghai, the nation’s largest city, where it has been said up to 70 percent of citizens may have been infected. This week, Chinese officials admitted to a significant increase in Covid-related deaths — despite official numbers claiming there have only been 22 since December — trying to downplay the numbers as small relative to that nation’s overall population.

The UK Government has announced that travellers from China will need to present a negative test result to their airline before flying.

On landing, a subset of passengers will also be tested for Covid on arrival. However, transport secretary Mark Harper told LBC yesterday, those who test positive will not be required to enter quarantine.

He said: “What we are doing is we are collecting that information for surveillance purposes.

“But, look, one in 45 people in the United Kingdom have got Covid at the moment.

“The policy for arrivals from China is primarily about collecting information that the Chinese government [is] not sharing with the international community.”

In an interview with state broadcaster China Central Television on Monday, National Health Commission Bureau of Medical Administration Director General Dr Yahui Jiao said: “We have a huge base, so what people feel that the severe cases, the critical cases or the fatalities are increasing.

“As far as this wave is concerned, what people have felt is the absolute number, not the low percentage [of deaths compared to total infections.]

“Relative to the rest of the world, the infection peaks we are faced with across the country are not unusual.”

Dr. Zhaohui Tong — the vice president of Beijing’s Chaoyang Hospital — agreed, adding: “Think how many people around you have been infected but how many have developed critical cases or pneumonia. I think everyone has the idea.”

In Shanghai it is said up to 70 percent of citizens may have been infected with Covid (Image: Getty Images)

The overall case numbers are harder to dismiss. According to Dr Erzhen Chen — who is the vice president of Shanghai’s Ruijin Hospital and a member of the city’s COVID-19 emergency advisory panel — as many as 17.5 million people in Shanghai may have been infected with SARS-CoV-2.

He told the state-owned media Dajiangdong Studio: “Now the spread of the epidemic in Shanghai is very wide, and it may have reached 70 percent of the population.”

That period last year saw the city enter a two-month-long lockdown, during which hundreds of thousands of residents were infected — and many were dispatched to mass quarantine centres. Now, however, Omicron is running rampant throughout the metropolis.

The UK has announced travellers from China will need to present a negative test result before flying (Image: Getty Images)

According to Dr Chen, the surge in cases has led to Ruijin Hospital seeing a whopping 1,600 emergency admissions each day — double the load seen prior to the lifting of restrictions — with around four-in-every-five being COVID-19 patients.

Furthermore, he noted that around half are vulnerable people aged 65 and over. He added: “More than 100 ambulances arrive at the hospital every day.”

Yesterday, the AFP reported that there were so many people admitted to downtown Shanghai’s Tongren Hospital — just some two miles west of Ruijin Hospital — that people were being treated outside the entrance to the overcrowded emergency ward.

Inside, meanwhile, corridors were said to be overflowing with hundreds of elderly patients lying on gurneys, swaddled in blankets and coats, hooked up to intravenous drips and some wearing oxygen masks. Some were reported to not appear fully responsive.

On landing, a subset of passengers will also be tested for Covid on arrival (Image: Getty Images)

According to Chinese health officials, the current wave has already peaked in the nation’s other major cities, including Beijing, Chongqing, Guangzhou and Tianjin.

However, in Zhejiang province — which lies to the south of Shanghai along the East China Sea — disease control authorities said yesterday that the peak was only just entering a peak plateau, with recent days having seen one million new infections.

Officials are said to be readying for a wave of the virus to hit China’s rural interior as millions of people prepare to journey back to their hometowns to celebrate the week-long holiday around the Lunar New Year, which begins on January 21 this year.

The corridors of Tongren Hosptial are said to be overflowing with hundreds of elderly patients (Image: Getty Images)

Dr Jiao said that the authorities recognised the pressure currently being faced by hospital emergency departments across the country.

She added: “What we are most worried about is that in the past three years nobody has returned home for Lunar New Year, but they finally can this year.

“As a result, there may be a retaliatory surge of urban residents into the countryside to visit their relatives, so we are even more worried about the rural epidemic.”

In light of this, Dr Jiao also promised that there would be a coordination of medical resources to ensure that patients in under-resourced, rural areas will receive adequate treatment.

During her interview, Dr Jiao also took the opportunity to hit back against allegations from other countries that Beijing has failed to be fully transparent about case numbers.

This is one of the reasons being cited in support of the planned introduction of testing measures in many countries on travellers arriving from China after its borders reopen from next Sunday, January 8.

Last month, China redefined its criteria for recording Covid deaths such that only those who died of respiratory failure would be counted.

Despite this, Dr Jiao claimed that China had always published data “on COVID-19 deaths and severe cases in the spirit of openness and transparency.”

She added: “China has always been committed to the scientific criteria for judging COVID-19 deaths, from beginning to end, which are in line with the international criteria.”