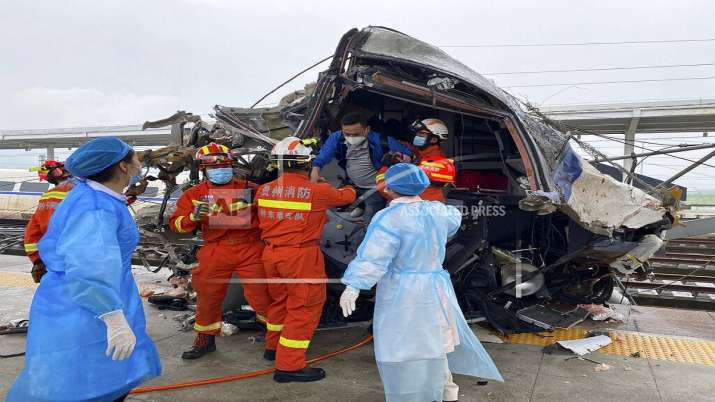 The driver of a high-speed train in southern China was killed and eight people were injured when two cars derailed early Saturday after hitting a mudslide, state broadcaster CCTV reported.

The accident occurred mid-morning as the train was entering a tunnel in the inland southern province of Guizhou. It had been travelling on a regular route to the coastal business centre of Guangzhou.

Those injured were in stable condition and the other 136 people aboard the train were evacuated safely, CCTV said. The cause of the accident is under investigation. Landslides have become common in the region from a combination of heavy precipitation and the development of infrastructure in mountainous areas.

China has the world’s most extensive high-speed rail network, with 40,000 kilometers (24,855 miles) of tracks nationwide and trains running at more than 300 kilometers (186 miles) per hour. Hundreds of millions of passengers are carried annually, although that figure has been severely reduced under pandemic-related travel restrictions.

The system’s safety record has been generally good, with the exception of a 2011 collision between two trains outside the southern city of Wenzhou that left at least 40 people dead and prompted a public uproar over an apparent effort to cover up the extent of the damage.

China’s aviation sector has also come under scrutiny lately following the still-unexplained crash of a China Eastern Airlines passenger jet on March 21 in which all 132 people on board were killed.

And on May 12, a Tibet Airlines flight with 122 people on board was departing from the southwestern city of Chongqing when it veered off the runway and caught fire. No one was killed, but several passengers were hospitalized with minor injuries.