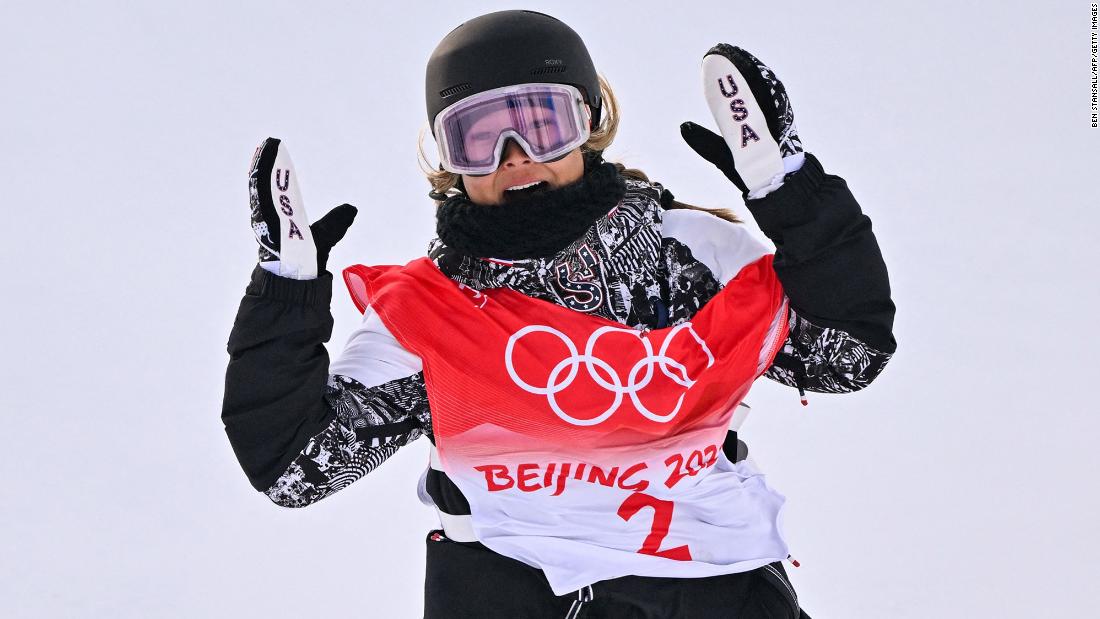 “I was so proud of myself. I had the worst practice, ever,” said Kim, who shouted with joy and sunk to her knees at the bottom of the halfpipe after landing the run and earning what would be the winning score of 94.

The flawless performance — in which she nailed frontside 10 and cab 10 tricks — was especially emotional after practice runs in which she missed sticking landings multiple times, the 21-year-old American said.

“I probably landed my run twice (in practice) when I’m used to landing it eight times, normally, and so that puts you in a weird headspace … I overflowed with emotion when I was able to land it on the first go, and it opened up a lot of opportunity for me to go try something new,” Kim said.

That meant going for some riskier tricks in the second and third runs, including a 1260 — a level of complexity past the two 1080s the athlete nailed in her first effort.

Kim fell in the second and third runs, but was glad she aimed for the complex move.

“It was worth it for sure, 1,000%. That’s what keeps me going. I wish I’d landed it, but next time,” she said, adding that she had “pretty recently” learned the trick and had yet to fully practice it in this halfpipe.

While her final, gold-winning score of 94 was points above Spanish silver medalist Queralt Castellet’s 90.25 and the 88.25 pulled by Japan’s Sena Tomita, who took bronze, Kim said she wouldn’t “necessarily say” her win was comfortable.

“The girls are killing it, and they’re progressing at such a quick rate. I find it inspirational that everyone’s out progressing the sport. At the last Olympics, you didn’t see that many 1080s, and now everyone is doing a 1080. That’s quite the improvement, and it’s such an honor to be part of this sport and help progress women’s halfpipe snowboarding,” she said.

Kim has said in the past she struggled to deal with the fame and attention that came with her Olympic success. She spoke to CNN in 2021 about her first day at Princeton University, recalling that “everyone was kind of staring at me, taking pictures.”

Kim also told CNN last year that she quit Princeton — for now — to go back to being “a full-time snowboarder” as she aimed to become the first woman in history to defend an Olympic halfpipe title.

Kim did just that in Beijing on Thursday.

This time around, however, with an Olympics amid a pandemic, Kim’s family was not there to cheer her on — something she said was missing from the gold-winning moment.

Kim was cheered on by China’s freeski big air gold medalist Eileen Gu, who was watching from the bottom of the halfpipe. The two champions hugged, with Kim shouting, “Love you!” as she walked off. Gu, who was born in the United States, won gold at the big air competition on Tuesday.