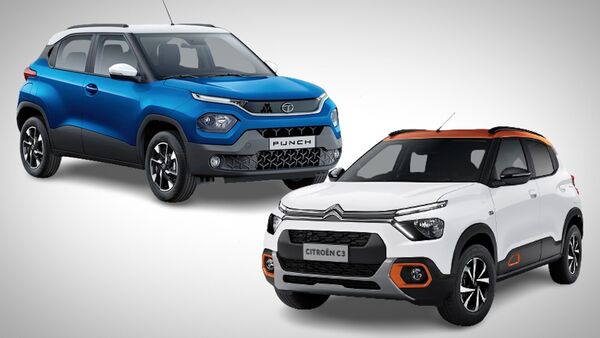 Citroen has said that C3 will compete with B-segment hatchbacks in India. However, with its SUV-like stance and credentials, the 2022 C3 will also rival Tata Punch SUV.

Citroen is ready to launch its second product in India, the new 2022 C3. The carmaker said that the C3 will be part of the B-segment hatchbacks in India. The French auto giant is specifically avoiding to categorise the C3 as an SUV, though the car has enough credentials to go up against some of the small SUVs currently available in the market. The closest in terms of specifications, features, powertrain and other aspects is the Punch, the smallest SUV from Tata Motors. Here is a quick look at how the new Citroen C3 and the Tata Punch stack up against each others in these areas.

Under the hood, both Citroen C3 and Tata Punch SUV has a 1.2-litre naturally-aspirated petrol engine. Where the Punch lacks is a turbocharged unit that will be available with the C3. The 1.2-litre unit in C3 is capable of generating 82 PS of maximum power and 115 Nm of peak torque. The Punch can churn out maximum output of 86 PS and 113 Nm of peak torque. The turbocharged petrol unit inside the C3 can develop 110 PS of power and 190 Nm of torque.

Citroen C3 promises to offer more space inside the cabin, despite being almost the same size of Tata Punch. The French carmaker promises that passengers at the rear seats will have ‘one of the best legroom in the segment’. However, the boot space inside the C3, which stands at 315 litres, is much less than 366 litres offered on Tata Punch.

Both cars come loaded with features such as touchscreen infotainment screen, dual front seat airbags, Apple CarPlay and Android Auto among others. However, C3 is slightly more premium with wireless charging facility, fast charging ports for both front and rear passengers, wireless connectivity among others.

As far as fuel efficiency is concerned, the Citroen C3 promises better bank for the buck. The 1.2-litre engine is certified by ARAI to return a mileage of 19.8 kmpl, while the turbocharged version is capable of returning 19.4 kmpl of fuel efficiency. Tata Punch has a certified mileage of 18.9 kmpl.

Citroen will launch the C3 on July 20. The 2022 C3 was unveiled back in September last year. Tata Punch, on the other hand, was launched in India on October 18, about a month after C3 was officially unveiled. The Punch SUV price starts from ₹5.82 lakh (ex-showroom) and goes up to ₹9.48 lakh for the top-of-the-range variant. It will be interesting to see how Citroen prices the C3, given that 90 percent of the car will be manufactured locally.