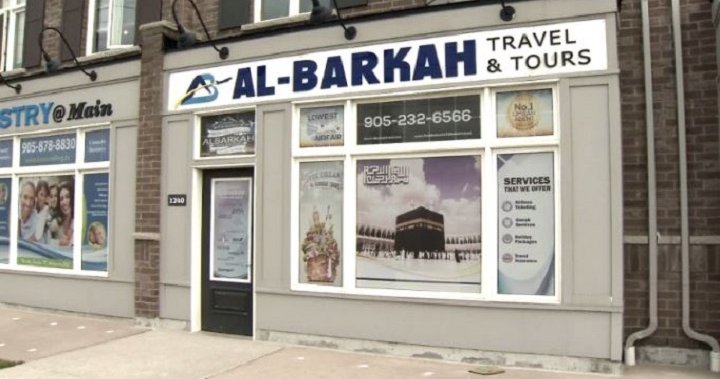 An Ontario travel agency has been shut down by regulators after mounting complaints that the business did not give refunds for airline tickets that were cancelled amid the coronavirus pandemic.

“Agencies have to hold that money in trust,” said Richard Smart, president and CEO of the Travel Industry Council of Ontario (TICO), which licences travel agencies in the province.

Global News received several complaints from consumers about Albarkah Travel and Tours, alleging that its owner had failed to repay money for trips that could not go ahead as a result of COVID-19.

“He said four-to-six weeks to get a refund; I never got anything,” said Nadia Aamir of Brampton, adding she paid more than $1,500 for a return ticket from Toronto to Lahore, Pakistan.

“I tried calling him, leaving messages, he didn’t reply to anything at all,” Aamir told Global News in an interview.

Albarkah, located in Milton, is run by Mahmood Bashir, who could not be reached by telephone because the agency’s phone line is disconnected.

Global News visited his home for comment and spoke to a man who said he was his brother.

“I don’t know where you could track him,” the man told a reporter before acknowledging Bashir resides at the new home with two late-model luxury German automobiles parked on the driveway.

Several customers told Global News they have gone to police to complain, but no charges have been laid.

Thirunalrayan Vijayan bought three tickets from Toronto to India from Bashir’s company on the recommendation of a friend. He expected to receive a promised refund of $4,765 but has not.

Eventually, Vijayan was sent a credit letter from the travel agency, valid for two years. The credit promise is written under the company’s letterhead.

But with the agency prohibited from providing travel services, the credit is worthless.

“It makes me miserable. It’s a lot of money,” Vijayan said.

The travel regulator said consumers have been calling with complaints about Albarkah for months.

“We have received numerous complaints, the nature of which you’ve described, consistent of what you’re hearing,” said Smart, who said the company is the subject of an ongoing investigation.

In the meantime, clients who believe they are owed money by the travel agency can contact TICO to file a complaint and attempt to receive repayment from the industry’s compensation fund.