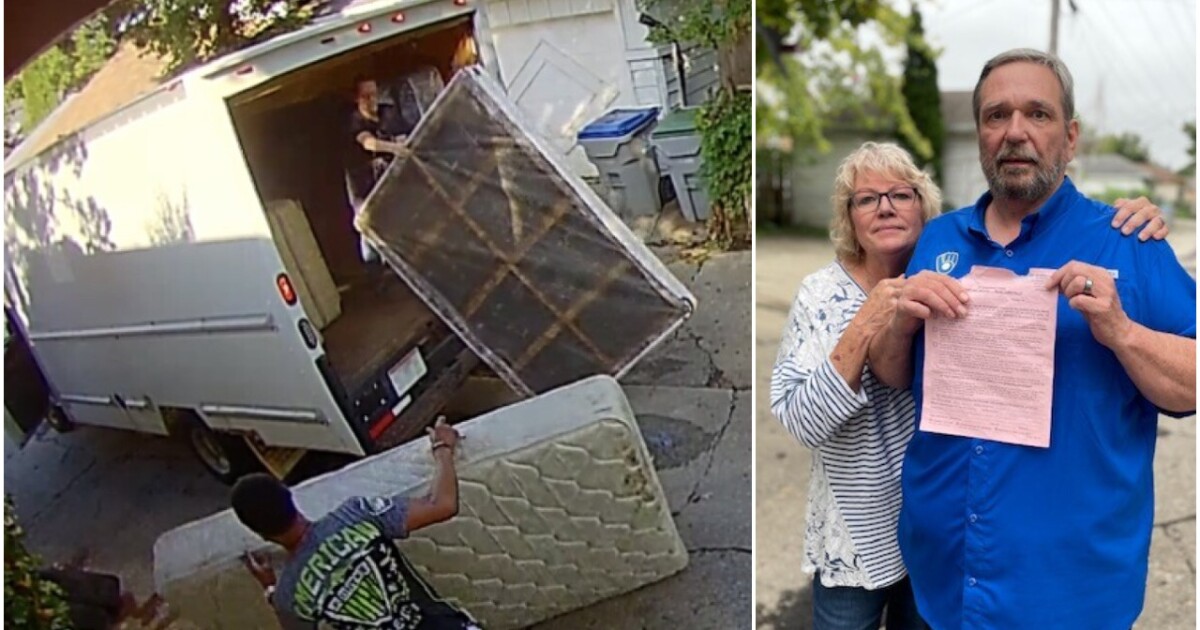 MILWAUKEE — A Sherman Park couple is sick of being a dump site for people who do not want to take their stuff to the trash. The problem has gotten so bad the city left a citation on their door, warning them they needed to clean up the garbage. But they say it is not theirs.

Diane and Pat Torok feel like they are constantly being dumped on by people.

“They do trash, tires, there was a half a couch one time. It’s persistent,” said Pat Torok.

But this past week was the topper. Diane and Pat called TMJ4 News when they saw two men dump mattresses into their alley. They showed us the security video that showed two men get out of a big white box truck and then unload five mattresses right in front of their garage door and then take off. The mattresses blocked in Diane’s car, forcing the couple to move them out of the way.

“We masked, gloves and boots, and then went and showered. They were nasty used mattresses,” said Diane Torok.

They called the City of Milwaukee and reported the illegal dumping. However, even though it was reported, the couple found a citation slapped on their door. It said they need to get rid of the stuff in the alley or face a fine.

The Toroks said they were lucky, they bought a security camera which showed the city that they didn’t dump the items. Otherwise, the couple might be paying up for someone else trash.

“We had to have the proof. We got the ticket,” said Pat Torok.

Illegal dumping is a big issue in Milwaukee. Although there are often hundreds of complaints, very few citations are issued.

Diane says the whole situation is beyond frustrating.

“I’m disgusted, p.o.’ed, mad. We care for our property as all of our neighbors do and it’s disgusting,” said Diane.

The problem is not unique to Milwaukee. Cities across the country deal with people dumping. In San Jose, California, they are considering paying homeless people from COVID funds to clean up areas of blight.

In Temple, Texas, a non-profit dropped dumpsters in 18 neighborhoods during the pandemic, telling people they could get rid of hard to dispose of items. They collected nearly 350 tires and 30,000 pounds of trash.

Right now, Diane and Pat still have tires that someone dumped a couple days ago in their alley. If the city doesn’t pick them up, either the Toroks or the neighbors will have to haul them and pay $3 a tire to throw out someone else’s trash.

“We didn’t put them there. They aren’t ours,” said Diane Torok. “If they have trash, put it in the trash.”

The Department of Neighborhood Services is trying to stop illegal dumping by asking people to report it when they see it. You can do that by calling (414) 286-CITY or you can report it online here.

Report a typo or error // Submit a news tip