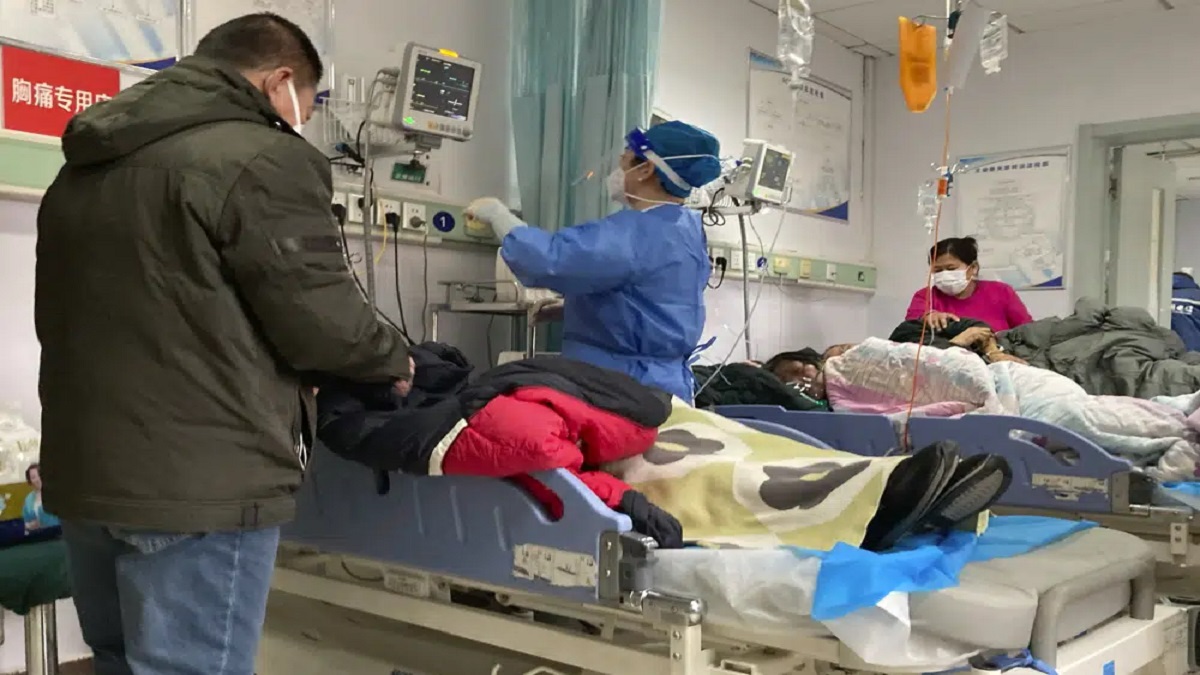 China COVID-19 cases: Nearly three years after it was first identified in China, the coronavirus pandemic is now spreading through the vast country. Experts predict difficult months ahead for its 1.4 billion people.

China’s unyielding “zero-COVID” approach, which aimed to isolate all infected people, bought it years to prepare for the disease. But an abrupt reopening, which was announced without warning on December 7 in the wake of anti-lockdown protests, has caught the nation under-vaccinated and short on hospital capacity.

Experts have forecast between a million and 2 million deaths next year. Predicting deaths has proven tricky throughout the pandemic, since it is influenced by varied factors and China presents an especially complicated case because of opaque information sharing.

It’s not clear exactly how large the current outbreak is, as China has reduced testing and stopped reporting most mild cases. But in cities and towns around Baoding and Langfang, in Hebei province, an area that was among the first to face an unchecked outbreak, media people saw hospital intensive care units overwhelmed by patients, and ambulances being turned away. Across the country, widespread reports of absences from work, shortages of fever-reducing medicine, and staff working overtime at crematoria suggest the virus is widespread.

China belongs to a small club of countries that managed to stop most domestic transmission of the virus in 2020, but it’s the last to end restrictions. Experiences of ending vary- Singapore and New Zealand achieved high vaccination rates and bolstered medical systems during restrictions, and reopened relatively smoothly. Hong Kong, where omicron overcame defenses while many elderly people were unvaccinated, suffered a disruptive COVID-19 wave in 2022. Nearly 11,000 people died of the illness this year in the city of 7.4 million, with 95% of them older than 60, according to Hong Kong’s department of health. Data from the city showed a 15% fatality rate for those older than 80 and unvaccinated, said Jin Dong-yan, a virology expert at Hong Kong University.

China has higher vaccination rates than Hong Kong did at the time of its omicron outbreak, but many people are vulnerable to infection, especially the elderly. The country has exclusively used domestically made vaccines, which rely on older technology than the mRNA vaccines used elsewhere that have shown the best protection against infection.

A study conducted in Hong Kong, which has administered both an mRNA vaccine and Sinovac’s CoronaVac, suggested that CoronaVac requires a third shot to provide comparable protection, especially for the elderly. An ordinary course of the vaccine is two shots, with an optional booster later. Most people vaccinated in China have received either CoronaVac or a similar vaccine produced by SinoPharm, but the country has administered at least five other vaccines. Comparable real-world data isn’t available for these vaccines.

While China counts 90% of its population vaccinated, only around 60% have received a booster. Older people are especially likely to have not had a booster vaccine. Over 9 million people older than 80 have not had the third vaccine, according to China’s official Xinhua News Agency.

Vaccination rates have increased over 10-fold, to over a million doses administered a day, since the start of the month. But Dr. Gagandeep Kang, who studies viruses at India’s Christian Medical College in Vellore said prioritizing the elderly would be key. Unlike other countries, China prioritized vaccinating the more mobile young to prevent the virus from spreading, said Ray Yip, the founding director of the U.S. CDC office in China. A campaign targeting those older than 60 started in December, but it is unclear how successful it has been.

They “did not pay enough attention to assure everyone gets full vaccine protection,” Yip said. “How well do they perform this particular catch up effort might determine some of the outcome.”

Around Baoding and Langfang, hospitals have run out of intensive care beds and staff as severe cases surge. Patients lay on the floor, while others drove from hospital to hospital searching for beds for relatives Wednesday.

The National Health Commission said China had 10 intensive care beds for every 100,000 people on Dec. 9, a total of 138,000 beds, up from 4 for every 100,000 people on Nov. 22. That means the reported number of beds more than doubled in just under three weeks. But this number “might be wrong,” said Yu Changping, a doctor at the Department of Respiratory Medicine of People’s Hospital of Wuhan University. “It is impossible that the number could have jumped sharply within such a short time,” Yu said.

Even taken at face value, the increase in intensive care beds doesn’t mean the health system is prepared for a surge in cases since the pressure point, as seen globally, is often the availability of specialized doctors and nurses who can treat patients who need intensive care, said Chen. China only has 80,050 doctors and 220,000 nurses for its critical care facilities, and another 177,700 nurses who the National Health Commission says could potentially work in those units.

“If you look at intensive care unit beds, China is… in a great shortage,” he said. Yu said he’s seen growing numbers of COVID-19 patients in recent weeks, and that almost all the doctors in the department have been infected. “We’re under pressure because we are receiving a large number of patients within a short time,” said Yu.

China has also not announced a clear triage plan, a system where hospitals prioritize giving treatments to the very sick to ration limited resources. Moreover, China’s health system is focused on large hospitals, which typically treat even the mildly ill, said Chen.

Potential shortages would depend on how quickly cases increase, and if those with mild symptoms don’t stay at home to ration resources for the very sick hospitals could still get overwhelmed, said Chen. “That could easily crash the system,” he said.

To try to protect its health system, Beijing has converted temporary hospitals and centralized quarantine facilities to increase the number of fever clinics from 94 to 1,263. But rural areas may suffer, as the vast majority of China’s ICU beds are in its cities.

The use of digital tools and telemedicine may offer some breathing room to hospitals: Over a third of hospitals use some form of telemedicine, and around 31% used digital tools in their health care, found a nationwide survey of 120 public and private hospital executives in urban areas conducted by LEK Consulting in Shanghai.

China approved Pfizer’s drug Paxlovid for COVID-19 earlier this year, and two domestic therapies: an antiviral used for AIDS made by Genuine Biotech that has been repurposed for COVID-19 and a cocktail of virus-blocking antibodies made by BriiBio. But it is unclear how widely available these drugs are.

HOW BAD OR WORRST WILL IT GET?

Scientists aren’t sure, since mortality depends on factors like vaccination rates, how people behave and efforts to bolster hospitals. The Institute for Health Metrics and Evaluation at the University of Washington in Seattle predicts deaths could reach a million by the end of 2023 if the virus spreads unchecked. But Ali Mokdad, a professor of health metrics sciences at the institute, said the government would likely be able to reduce this toll with renewed social distancing measures.

Another study, from Hong Kong University, also predicts nearly a million deaths in a scenario in which the virus spreads throughout the country and authorities can’t provide vaccine boosters and antiviral treatments. Bill Hanage, co-director of the Center for Communicable Disease Dynamics at Harvard T.H. Chan School of Public Health estimated 2 million deaths in a Dec. 14 call with reporters.

“China has got a very, very hard road ahead of it in the coming months,” Hanage said. “But in the absence of vaccination, it would be much, much worse.”

Will a surge in China spill over into the rest of the world? Neighboring India has asked its state governments to remain alert, and not let genomic sequencing efforts wane. Jeremy Luban of University of Massachusetts Chan Medical School said large surges in infections increase the potential for a more dangerous mutation to arise. Luban has seen “no specific reason to be concerned” about any alarming variants already simmering in China, “except for the fact that a lot of infections are bad.”

Luban added, “The more the rate of transmission could be controlled in China the better.”