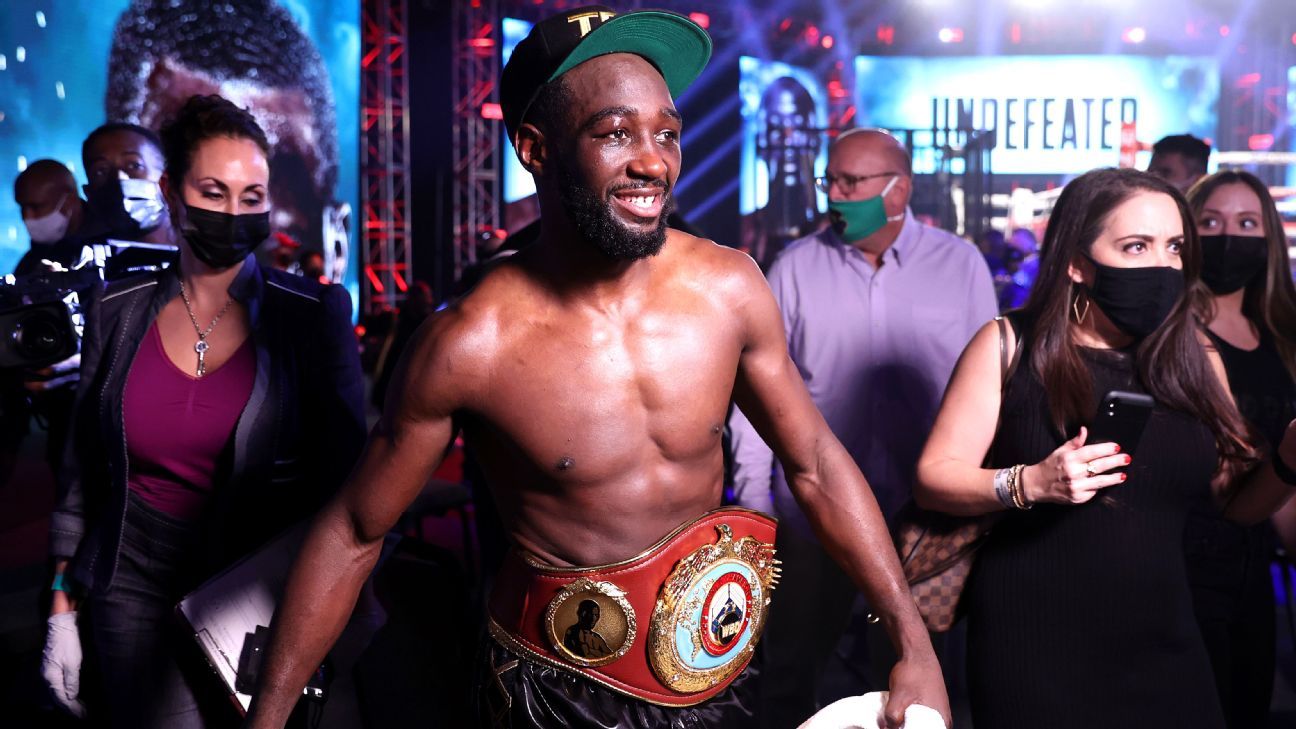 Another Terence Crawford fight, another eye-opening victory for the welterweight world titlist to solidify his spot atop the ESPN pound-for-pound rankings. But how long will fight fans have to wait for the megafights against top opponents and fellow titleholders Errol Spence Jr. and Manny Pacquiao?

Former featherweight world titlist Shakur Stevenson, who returns to action on Dec. 12, moved up to the junior lightweight division in search of bigger challenges, but can he get them in 2021? And now that Canelo Alvarez is a free agent and can pick his own opponents and control his own fights, is a third bout against Gennadiy Golovkin closer to becoming a reality?

But on Nov. 28, all eyes will turn to the two boxing icons getting back in the ring. Will Mike Tyson vs. Roy Jones Jr. really look like an exhibition? They are fighting for the WBC’s newly created Frontline Battle Belt, so does that mean it is a real fight? And talking about the WBC, the organization recently announced the possibility of creating a new heavyweight division called “Bridger” that will include fighters in the 200- to 224-pound range. Do we need another division in boxing — No. 18?

ESPN’s boxing experts share their thoughts on these topics and more.

Real or not: Terence Crawford shouldn’t take any other fights except for showdowns with Errol Spence Jr. or Manny Pacquiao

Eric Woodyard: Real. It’s go time. No more waiting. The fans only want to see the megafights of the welterweight division at this point. Either Terence Crawford versus Errol Spence Jr., Manny Pacquiao, Shawn Porter, Keith Thurman or Danny Garcia. Only those level of fighters. No more waiting.

It’s bad for the sport when the big fights don’t happen. It’s hard to name another successful business model that robs customers of their true interest. The boxing promotional companies have to come together to get it done. Public opinion probably doesn’t matter within Crawford’s camp, but if these legacy bouts aren’t made, he might not fully get the credit he deserves, and you have to wonder whether this will impact his deal with Top Rank moving forward. Honestly, the marketing of Crawford could be stronger. With his status in the sport, he’s not mentioned as much as he should be, especially for a guy of his talent in the midst of his prime.

I want to see the best face the best, and I want it now.

Real or not: Shakur Stevenson will face Joseph “JoJo” Diaz and Vasiliy Lomachenko in 2021

Cameron Wolfe: Real. Stevenson is one of boxing’s best young stars and he’s ready for his marquee fight in 2021. Top Rank’s Carl Moretti told ESPN they matched Stevenson up with Toka Kahn Clary, a southpaw, on Dec.12 as a tune-up to potential fights against Lomachenko and/or Diaz, who also are southpaws. So it appears to be the plan, and there’s no reason why it can’t happen.

A Lomachenko-Stevenson bout would be a tantalizing matchup of speed, technique and top skills, but given Stevenson’s current trajectory, facing Diaz for the IBF junior lightweight title sometime next summer or fall could be the perfect step in his development. If Stevenson’s 2021 features a matchup with the winner of Jamel Herring-Carl Frampton for the WBO junior lightweight title, and then Diaz, Top Rank’s young star could be a unified titlist by the end of next year and potentially set up a 2022 megafight with a revived Lomachenko.

Real or not: With Canelo Alvarez as a free agent, the chances of a third fight with Gennadiy Golovkin are better

Max Kellerman is curious about Canelo Alvarez’s next partnership after it was announced Alvarez was released from his contract with Golden Boy.

Nick Parkinson: Real — but only if Canelo agrees to work with DAZN again after walking out on the streaming service this year, and depending on whether Alvarez comes through to make his fight with Callum Smith next month a reality.

Canelo (53-1-2, 36 KOs) settled a breach of contract lawsuit with his promoter, Golden Boy, and DAZN earlier this month and he is now a free agent. Golovkin (40-1-1, 35 KOs) is guided by Matchroom promoter Eddie Hearn, who works with DAZN in the U.S., so becoming a free agent makes it less complicated as there are no rival promoters or TV companies around the negotiating table. It means Alvarez’s team can go directly to Golovkin’s representatives and Hearn for a trilogy encounter.

The same is currently happening with Alvarez’s team and Hearn over Alvarez facing Smith (27-0, 19 KOs), the WBA super middleweight titlist and the ESPN No. 1-ranked fighter at 168 pounds. That fight, according to reports, would be on DAZN despite Canelo’s recent fallout with the company.

Real or not: Mike Tyson and Roy Jones Jr. won’t fight like it’s an exhibition

Eric Woodyard: Real. You can expect these two OGs to take this bout very seriously. It has received too much attention for them not to come in ready to fight, plus the No. 1 rule of the sport is that you can’t “play” boxing. These two boxing icons have experienced so much massive mainstream success that they don’t know anything other than real boxing at this point of their lives. Although both guys may have entered the negotiation process with the intentions of an exhibition, once the event became pay-per-view with eight rounds along with the commemorative, WBC “Frontline Battle” belt, it became bigger than they may have intended. Also, if they don’t provide some sort of excitement, it could take some steam off future events for Tyson’s Legends Only League.

Expect a real scrap, although both guys are well past their prime, during which they once captivated audiences with an array of speed and skill. The casual fan shouldn’t come in expecting the same fighters from their highlight reels in their prime years, but it could still be entertaining with their clash of styles.

Real or not: Boxing will benefit from the “Bridgerweight” title

Let’s call this what this is — another short-term money grab that hurts the sport. And that’s not even referencing the fact the WBC named this division after a child who protected his sister from a dog attack in a heroic act, which provided cheap cover for this sham.

The WBC is increasingly becoming bad for boxing and is cheapening its own legacy in the sport. This division unveiling comes after Teofimo Lopez won the WBC “franchise” belt and was dubbed the undisputed champion despite Devin Haney owning the top WBC belt in the lightweight division (which is still real, by the way).

Boxing’s best selling point is its history that is unmatched by virtually every other sport in the world. The new WBC belt is an affront to that. Here’s what boxing needs to do: Ignore the “bridgerweight” division entirely. It’s only as legitimate as the people who recognize it.

And if that means not even mentioning it by name, then so be it.