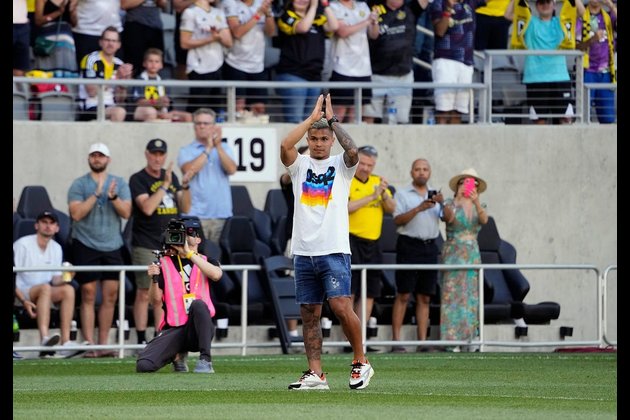 The Columbus Crew seeks a sixth straight game without a loss and should have a reinforcement to accomplish that when they play at the Chicago Fire on Saturday.

Columbus (5-5-7, 22 points) sits tied for ninth in the Eastern Conference with one of the league’s weakest offenses, having been shut out eight times. That includes two scoreless ties in the past three games during the team’s current 2-0-3 run.

Enter Cucho Hernandez against the Fire, or at least a brief appearance for the Colombia national team forward. He was signed to a club-record transfer fee of $10 million last month after scoring five goals for Watford in the Premier League in the 2021-22 season.

He is expected to play 20 to 30 minutes off the bench in his debut, Crew coach Caleb Porter said Friday, because Hernandez has not played a full match since the end of the English league season in May. The 23-year-old previously played in the Spanish La Liga.

The Crew need production from him if they are to make the playoffs.

“As far as being the (Crew’s) main goal scorer, it was very important to me because I think that if I do well and the team does well, we’ll be able to succeed together,” Hernandez said last week. “But I’m a player that thinks about the team first, and if the goals come, then that’s even better.”

The Fire (4-9-5, 17 points), whose first-year coach Ezra Hendrickson won an MLS Cup for Columbus as a player (2008) and assistant coach (2020), has his own star in midfielder Xherdan Shaqiri.

The 30-year-old Swiss star is tied with Kacper Przybylko for the team lead with three goals. Shaqiri was pulled during the 2-1 loss at San Jose on Sunday but Hendrickson said not to worry.

“He’s fine. He just had a little hip injury but I don’t think anything major,” Hendrickson said of Shaqiri. “We just wanted to make sure that it didn’t get worse, whatever it is, that was bothering his hip.”

Shaqiri is not listed on the latest injury report.