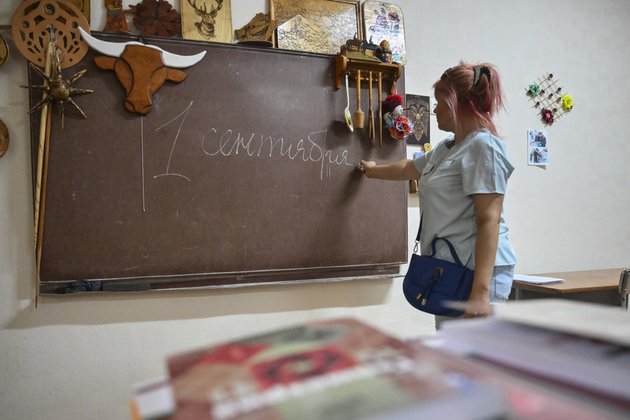 Teachers who arrived to the Russian-controlled territories of Ukraine have committed a ?crime,? Kiev says

The Ukrainian forces have detained an unknown number of Russian teachers in the Kharkov Region, where they have recently taken several cities during a major counteroffensive, Kiev confirmed on Monday. Those who taught local children in accordance with the Russian curricular program will now face criminal charges in Ukraine, Deputy Prime Minister Irina Vereshchuk told the Ukrainian media outlet Strana.

“They have committed a crime against our nation,” Vereshuk said, adding that “a court will determine their … punishment.” The deputy prime minister accused the detained teachers of engaging in “illegal activities” without elaborating which specific crime they had supposedly committed. According to Strana, Vereshchuk said they could be charged with “violating the laws of war” – a criminal charge typically used against war criminals engaged in torture, killings of civilians and looting.

She also “warned” other “Russian citizens” that have arrived to what she called “temporarily occupied Ukrainian territories” that they “would certainly face punishment unless they immediately leave our territory.”

Detained teachers would not be eligible for prisoner swaps with Russia, Vereshchuk added, arguing that “they are not combatants” and are thus not covered by the Geneva conventions.

Ukrainian teachers who agreed to use Russian curricula would be branded “collaborators” and face criminal charges as well, Vereshchuk warned.

Such charges involve “serious prison sentences,” the deputy prime minister said as she called on people on the Russian-controlled territories to “by no means cooperate” with the Russian forces and “evacuate.”

Meanwhile, Ukrainian forces are hunting for the supposedly remaining Russian soldiers and local “collaborators,” the pro-Kiev mayor of Izyum told the BBC. Ukraine’s State Bureau of Investigations also said last week it would conduct a “filtration” of civilians in Balakleya, another town in the area recently taken by Kiev’s forces.

Russia sent troops into Ukraine on February 24, citing Kiev’s failure to implement the Minsk agreements, designed to give the regions of Donetsk and Lugansk special status within the Ukrainian state. The protocols, brokered by Germany and France, were first signed in 2014. Former Ukrainian President Pyotr Poroshenko has since admitted that Kiev’s main goal was to use the ceasefire to buy time and “create powerful armed forces.”

In February 2022, the Kremlin recognized the Donbass republics as independent states and demanded that Ukraine officially declare itself a neutral country that will never join any Western military bloc. Kiev insists the Russian offensive was completely unprovoked.