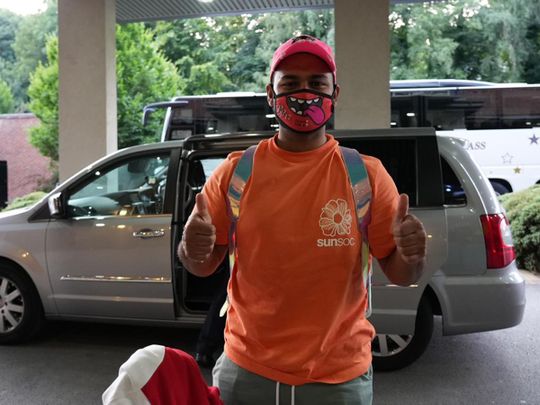 Kolkata: The Indian Test squad in England must have heaved a sigh of life as Rishabh Pant, their regular wicketkeeper-batsman, joined the set-up in London after recovering from Covid-19 and completing his mandatory period of isolation.

The BCCI put out a tweet welcoming Pant back into the India contingent on Thursday while Shubhman Gill, the opener who had been ruled out of the entire Test series, has flown back home.

Pant tested positive on July 8 and could not travel with the rest of the team to Durham where the Indians are playing a three-day warm-up match against a County Select XI ahead of their first Test which begins on August 4 in Nottingham. There have been reports of a few niggles in the Indian squad, with skipper Virat Kohli opting out of the three-dayer with a stiff back while Test vice-captain Ajinkya Rahane had a swollen hamstring but is expected to be fit in time for the first Test.

Rohit Sharma is leading the squad in the warm-up game – on it’s final day – where KL Rahul, who is doubling up as the wicketkeeper, scored a fluent 101 (retired) in their first innings with India scoring 311. Mayank Agarwal, who along with Rahul is being touted as one of the replacements for Gill in the opener’s slot, got a start before being dismissed for 28.

Apart from Pant, four other members of the India camp were also in quarantine in London: training assistant Dayanand Garani, who also tested positive for Covid-19, as well as wicketkeeper Wriddhiman Saha, reserve opener Abhimanyu Easwaran and bowling coach Bharat Arun, who were identified as close contacts.

There was, however, some disquieting news for the Indian camp as fast bowler Avesh Khan, a stand-bye, injured his thumb in the warm-up match in Durham. Khan sustained the injury in his left thumb while fielding for the County side on a ECB request and was taken for scans.

“Fast bowler Avesh Khan remains under observation of the BCCI medical team,” the Indian cricket board said on Wednesday, adding that the 24-year-old would miss the remainder of the match.

Meanwhile, seamer Ollie Robinson has been recalled to the England squad for the first two Tests against India, the ECB announced on Wednesday.

The 27-year-old was handed an eight-match ban, five of which are suspended for two years, for a number of “offensive tweets” he had sent out between 2012-2014 that came to light during his England Test debut against New Zealand in June.