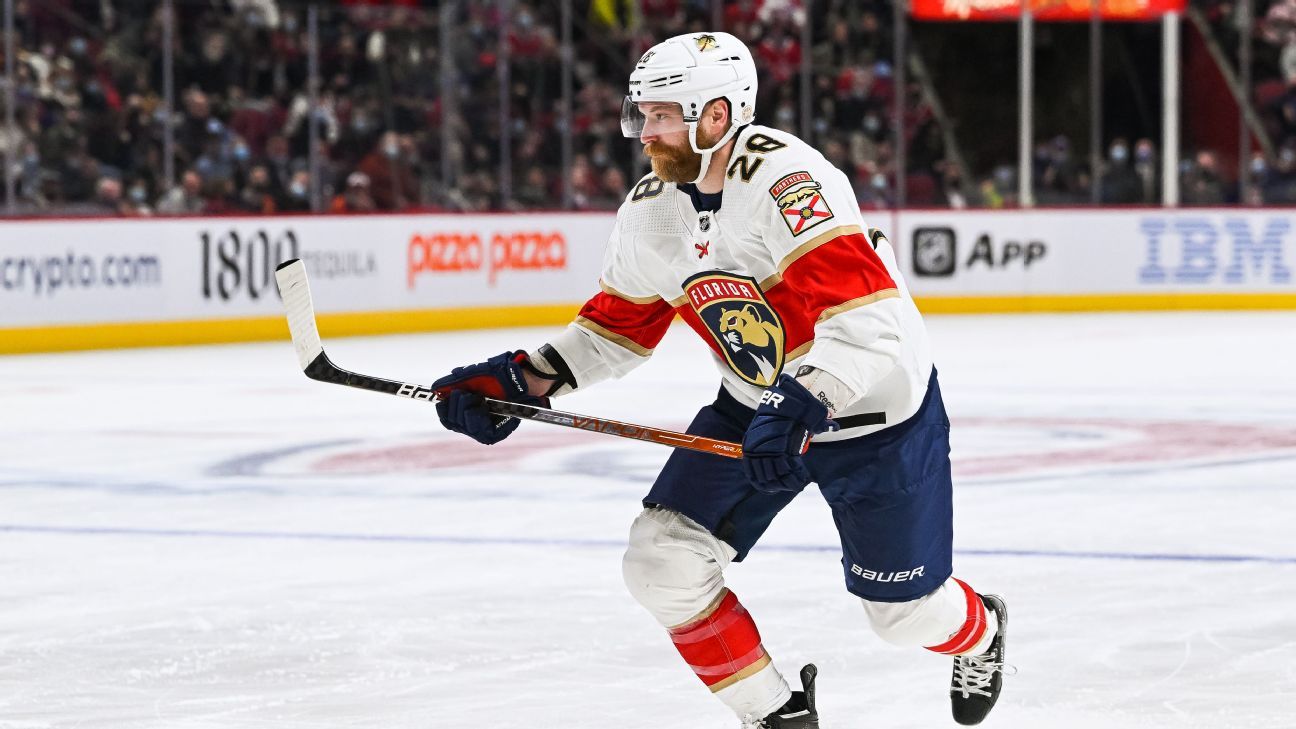 Monday will be two weeks post-trade deadline, so we have a handful of games from the moving parts to take a deeper look.

Claude Giroux, C/W, Florida Panthers: I’ll qualify this by suggesting the Panthers really don’t have any wrong answers for how to deploy their top three lines these days. That said, Giroux got a few games in with Aleksander Barkov and Carter Verhaeghe before a recent switch to give him a try with Jonathan Huberdeau. But for the record, the line with Barkov – in a very small sample, mind you – was super dominant. Per MoneyPuck.com, the Giroux-Barkov-Verhaeghe trio has played together for 32 minutes at five-on-five. Small sample or not, the Corsi for percentage and raw shot attempts for per 60 minutes by the trio are the best in the NHL this season by any trio with at least 30 minutes together. Fantasy managers have to be hoping Giroux is back with Barkov sooner than later.

Rickard Rakell, W, Pittsburgh Penguins: After playing his first three games with the Penguins on the third line with Jeff Carter, Rakell has played the past three games on the wing with Evgeni Malkin. That includes the blowout 11-goal performance against the Red Wings by the Pens. The exact line combination going forward is a little hard to predict with the recent return and re-injury to Jason Zucker – who during his one game back served as the third member of the line with Malkin and Rakell. But the bottom line here is that Rakell does seem to be settling in with Malkin and looks like he’ll be as strong a fantasy option as predicted on deadline day. Unfortunately, it does not look like he’ll be able to crowd in on some minutes with the top power-play unit, as Bryan Rust remains firmly entrenched as the fourth forward.

Mark Giordano, D, Toronto Maple Leafs: You may look at his one goal and one assist with the Leafs and not be all that jazzed by the results. But Giordano has massively improved his fantasy worth in his new home. Thanks to some quality peripheral stats (shots, hits, blocked shots), Giordano has pumped out 2.5 fantasy points per game (FPPG) in his five outings with Toronto. The pace per minute is actually too good to expect him to keep it up. His 7.31 fantasy points per 60 minutes (FPP60) as a Maple Leaf would be the best in the NHL if you could consider the sample significant (which it is not); Roman Josi leads all defensemen with 7.19 FPP60. Still, it means he can slow down the output a bit and still be among the fantasy elite.

The head-to-head fantasy playoffs probably start this week, so I’ll remind you of two things: Play into your matchups when setting your lineup, and there’s a good chance this matchup will extend two weeks for you.

Check out your opponent’s season stats before you make some decisions. On your ESPN league’s standings page you can see the season-long statistics put up by each team. Look at where your opponent is especially strong and especially weak, then attack or concede those categories to give yourself the best chance to advance.

For rotisserie leagues, you can start doing a little bit of this as well. It’s much tougher on the larger scale, but there is a chance that you can look for specific categories to try to squeeze out some extra points in the standings. If you have gig gaps above and below you in a category and are unlikely to move up or down, you can perhaps target a different category in order to push for an extra point. Just be careful doing this as there is a chance others could try to take advantage if they see what you are up to.

But for points leagues, stay the course. It doesn’t matter which category you get the points for as long as you continue to collect them.

This week has a couple of two-game clubs you can fade. The Chicago Blackhawks and Vegas Golden Knights probably don’t have a lot of must-starts among their ranks for a two-game week during a week that has 12 teams playing four games. Patrick Kane, Seth Jones, Alex DeBrincat, Alex Pietrangelo and Jack Eichel might be where the line gets drawn for starts. It is unfortunate that the schedule doesn’t benefit the return of Alec Martinez for the Knights this week – but remember he is back when it’s the to set next week’s lineup.

St. Louis Blues: With the Kraken and Coyotes among the teams on the four-game schedule for the Blues, you can load up on some of the offense. This includes the widely available Robert Thomas, who has averaged 2.0 FPPG during the past 11 games. And I still think Nick Leddy could shine through on this schedule as he is getting a decent share of the Blues power-play minutes on the point with Torey Krug sidelined.

Toronto Maple Leafs: As usual, there aren’t a lot of places to attack for fantasy hockey given the top-heavy nature of the Leafs lineup. But I will note that Jack Campbell should be back to health for this four-game week at some point. And I would also like to softly float the idea that Timothy Liljegren looks like he’s turning a corner for fantasy. You might not be able to take advantage of it next week or even this season, but check out his numbers lately: 12 games in March with a goal and seven helpers in a mere 15:45 in average ice time. His five-on-five Corsi for the month is 13th best in the NHL among defensemen, despite his minimal usage. But with Jake Muzzin also nearing a return, I don’t think we will get to see that Liljegren breakout continue.

Carolina Hurricanes: The Hurricanes gave Max Domi a shot with Vincent Trocheck and Andrei Svechnikov in their most recent game. They generated 14 shot attempts and allowed only six in 10 minutes at five-on-five. That’s enough that they might give this line another whirl, especially as they look to rebalance the line with Jesperi Kotkaniemi out of the lineup. The Canes have a four-game week that includes two games against the Sabres.

Clayton Keller, C/W, Arizona Coyotes: If you missed the news, Keller is done for the season. I do think this puts a massive damper on the value we’ve been getting from Nick Schmaltz lately. Schmaltz has played the vast majority of his five-on-five minutes with Keller this season and they’ve made a good pair – even managing a positive goals differential as a unit with Travis Boyd despite this team’s overall scoring.