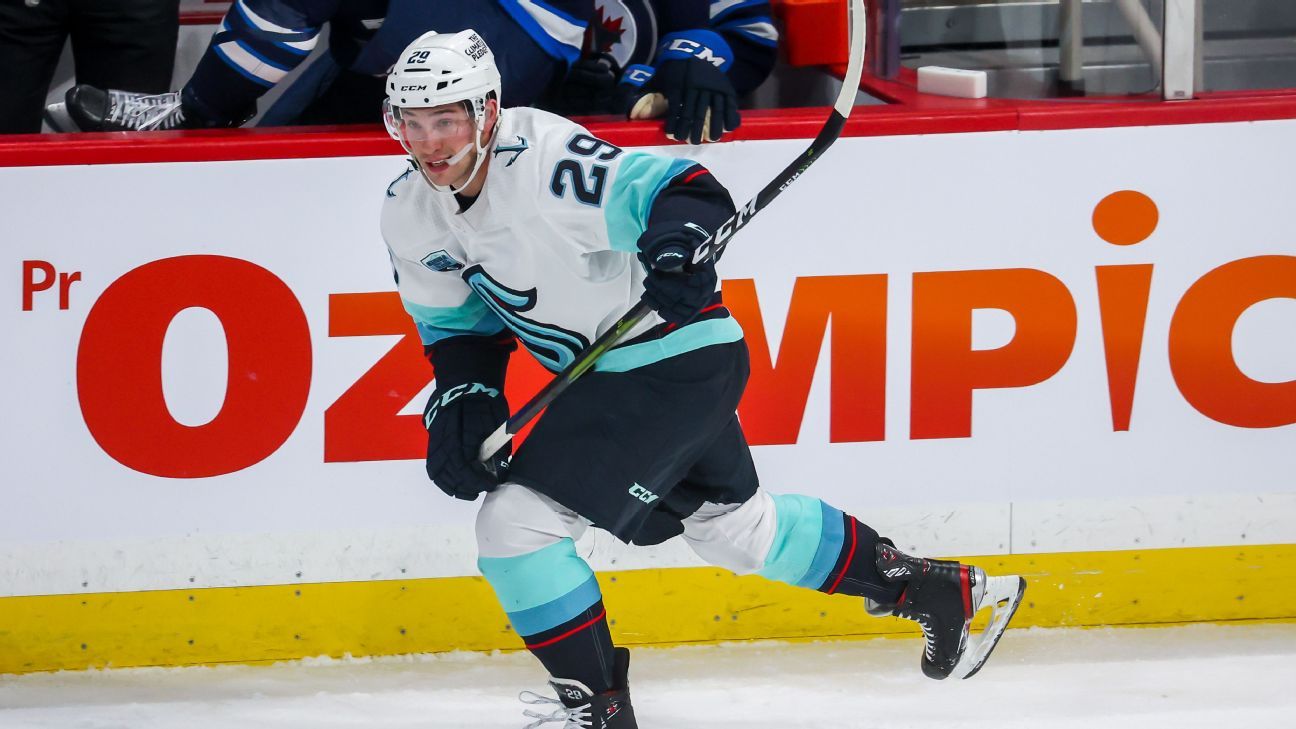 There are many large and small fantasy swings falling out from the NHL’s trade deadline, so I’ll focus on some condensed ranking notes this week to attempt to jam as much in as possible.

But before we dive in, a friendly reminder that some teams — the Ducks and Golden Knights for example — have as few as 17 games remaining. That really focuses these rankings to enormous fluctuations. A single goal at this stage can boost a player’s remaining fantasy point projections by three percent. Just a small example to drive the point home: Adam Henrique projects for 33.8 more fantasy points, which ranks 159th among skaters. One extra goal from Henrique on top of his current pace — even if it’s an empty-netter — would boost him from 159th to 121st.

So start really taking any rankings with a grain of salt. A good game here or a small slump there can really impact how the fantasy landscape shakes out from here.

Forwards on the move

Aleksander Barkov, C, Florida Panthers (up three spots to No. 2): That’s right. Given a new linemate of the caliber of Claude Giroux and I’ll take Barkov from here out over anyone but Auston Matthews.

Evgeni Malkin, C, Pittsburgh Penguins (up 18 spots to No. 34): Rickard Rakell is no joke as a scoring winger when he has a dynamic center to help set him up. He hit 30-plus goals back in the heyday of Ryan Getzlaf and Corey Perry as their linemate, so a combination with Malkin should produce a similar pace. He could even push Bryan Rust for time on the top power play after a couple games.

Bryan Rust, W, Pittsburgh Penguins (down eight spots to No. 59): As mentioned above, I have some concern that Rakell could push in on Rust’s role on this dangerous man advantage. There is only room for one other forward after locks Sidney Crosby, Jake Guentzel and Malkin. With 38 percent of Rust’s points coming on the power play, that’s a real concern.

Claude Giroux, C/W, Florida Panthers (up 56 spots to No. 61): His fantasy production has been bad, but he’s had no help. Now he gets to skate with one of the best centers on the most dangerous offensive team and get a role on a top 10 power play.

Valeri Nichushkin, W, Colorado Avalanche (up 47 spots to No. 84): When the Avs didn’t get Giroux, it meant Nichushkin should get to ride out the season as the top-line winger with Nathan MacKinnon and Mikko Rantanen. He’s getting top power-play time to boot. It’s doubtful Artturi Lehkonen will push on either of those roles.

Carter Verhaeghe, W, Florida Panthers (up 58 spots to No. 167): Barkov to Giroux with the secondary assist going to Verhaeghe. Get used to that combination as this line just got a lot more dangerous and Verhaeghe has a role on it. Look for him to get back to the 1.8 fantasy points per game (FPPG) he posted last season — if not better.

Andrew Copp, C/W, New York Rangers (up 78 spots to No. 172): It’s not as huge a leap for Copp as he’s so versatile it’s to his own detriment for fantasy. The Rangers will look to use him to boost the talent of the third line if they can. But there’s room to grow here if Frank Vatrano slows down in his new role with Artemi Panarin and Ryan Strome.

Defensemen on the move

Mark Giordano, D, Toronto Maple Leafs (up 21 spots to No. 115): No, I don’t think he bumps Morgan Rielly from the top power play … at least not right away. But the fact that the Leafs are the No. 1 power play in the NHL, but Rielly has “only” 18 power-play points means there is a crack here for Giordano to assert himself.

Ben Chiarot, D, Florida Panthers (up 61 spots to No. 134): Showing up at just the right time, Chiarot might be the answer to the Panthers power play while Aaron Ekblad is sidelined. MacKenzie Weegar has little experience there and Brandon Montour is a specialist. Even though Chiarot hasn’t been a QB with the Habs all season, he has almost as many power-play minutes as Montour and twice as many as Weegar. And don’t forget this power play also has Giroux up front now.

Morgan Rielly, D, Toronto Maple Leafs (down 22 spots to No. 143): Rielly has only topped 2.0 FPPG once in the past six seasons. Giordano had six straight seasons of 2.0 or better FPPG before this year with the expansion Kraken. I think Giordano is the better fantasy play from here on out — even if he doesn’t usurp the QB role.

Sean Durzi, D, Los Angeles Kings (enters ranks at No. 217): The Kings didn’t get a rumored deal done for Jakob Chychrun and Drew Doughty‘s injury is expected to linger longer than expected. It’s not as great power play to run, but it’s all Durzi’s for now.

Vince Dunn, D, Seattle Kraken (enters ranks at No. 234): With Giordano gone, the lane is clear for Dunn to be the offensive voice on the Kraken blue line. I’m not hoping for much after he was a bust for most of this season, but maybe the little bit of breathing room is enough to help him get going.

Goaltenders on the move

Postgame analysis and highlight show airing each night throughout the season from Barry Melrose and Linda Cohn. Watch on ESPN+