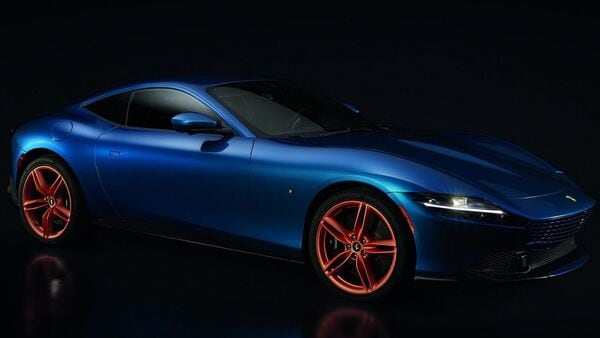 Ferrari has not revealed any specification details of the special edition Roma, which indicates the updates are limited to cosmetic details only.

When it comes to high-end sportscars, exclusivity is the other side of the coin. In order to make exclusive cars, sportscar manufacturers often take unique routes. Italian iconic sportscar marquee Ferrari has tailor-made a Roma that celebrates the artisanal histories of Italy and Japan. This special edition Ferrari Roma comes with exquisite detailing of traditional Japanese crafting techniques.

The automakers that this customised Roma has been developed in association with Evan Orensten and Josh Rubin, who did several research trips to Japan to search for the country’s traditions.

Speaking about the special edition one-off Ferrari Roma, it comes wearing a special shade of blue that is claimed to have been inspired by traditional indigo manufacturing. The dye is claimed to come from a green plant that is harvested and fermented to become sukomo. After fermentation is mixed with lye, sake and limestone power to create an element that has natural antibacterial properties. Ferrari claims to have given its tribute to the craft by creating the special Indigo Metal shade.

Not only the exterior, but the special colour theme continues inside the cabin of the special edition Ferrari Roma. The automaker claims that it has used special inserts for the seats. The material is known as Sakiori, which is a fabric that dates back to the 1700s when cotton and silk were highly expensive. In order to create that, Ferrari used worn-out kimonos. The automaker disassembled the kimono and rewoven it with new fibres to create a warm, comfortable, new fabric.

For this special edition Ferrari Roma, the fabric was made of two vintage kimonos made in Amami Oshima and dyed with indigo more than 45 and 75-years-ago, respectively. Ferrari also claims that the fibres from these kimonos were mixed with cotton and silk, as is traditional, as well as with high-tensile nylon to ensure the material will last in the Roma.

The headliner too comes wearing the special blue theme. The lining has been made of two hides, dyed indigo using the Roektsu method, which dates back to the eighth century. The wax resist-dyeing method forms intricate repeated patterns around a single colour that was traditionally used to decorate the silk or cotton of kimonos and obis, claims Ferrari.