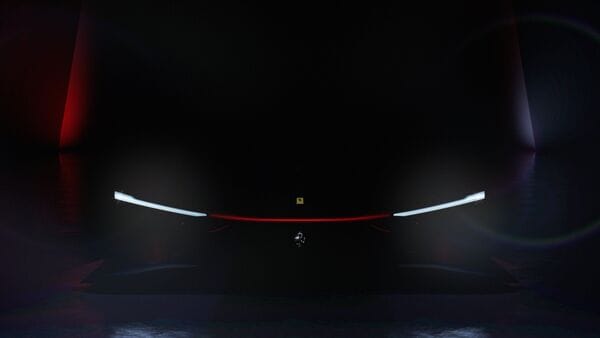 Ferrari’s Le Mans hypercar is slated to hit the track within a few weeks.

Italian iconic supercar marquee Ferrari has teased its upcoming Le Mans hypercar for the very first time. The automaker has also hinted that its new Le Mans race car will hit the track within a few weeks. The lone teaser image comes testifying the automaker’s February 2021 announcement when it revealed its plan to return to the Le Mans racing arena.

Speaking about the teaser image, it simply shows a pair of sleek LED lighting elements flanking a strip of red, which sits below the yellow-coloured brand logo and a silver prancing horse. Apart from this, the Ferrari has not revealed anything else. Expect the upcoming Ferrari hypercar to come with an all-wheel-drive system on board along with a hybrid powertrain setup as well.

The Italian car brand has said that its all-new Le Mans hypercar will commence its first development tests in the coming weeks in July as part of its preparations for the FIA World Endurance Championship in 2023. This will mark Ferrari’s comeback to the Le Mans for the first time in 50 years. The last time, the automaker participated in the race was on 10th June 1973.

Ferrari is not the only carmaker that is gearing up for the next year’s Le Mans race. Several other automakers have already geared up to position their respective hypercars in the 2023 24 Hours of Le Mans race. Ferrari’s LMH will compete with cars from rivals such as Cadillac, Lamborghini, Acura, Porsche, BMW, Toyota, Peugeot etc. Ferrari is yet to reveal about the debut of its Le Mans race car.