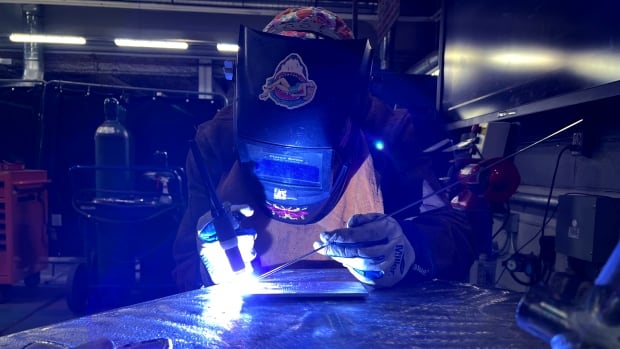 Behind a blinding wall of blue-and-white light in the welding shop, Vikki Schembri has finally found her spark at Confederation College in Thunder Bay, Ont.

The 29-year-old was defending her thesis for a master’s degree in health sciences at this time last year. Her family and teachers had always praised her intelligence and research skills, but despite her success, she didn’t enjoy the work.

“My parents were like, ‘University is the best way to do education. Once you have a degree, you can do anything you want,'” she says. “And now I have a degree and I have a welding diploma, and I’m still figuring out if I can do whatever I want.”

In a climate where skilled trade workers are retiring at a rate among the highest in the workforce, graduations from programs in northwestern Ontario have decreased by a third since 2001.

Despite efforts to promote gender diversity, men continue to form the biggest share of all tradespeople.

New data from the North Superior Workforce Planning Board shows the gender balance in the region is shifting slower than elsewhere in the province. Only 8.5 per cent of the 1,100 active apprentices in the Thunder Bay district last year were women, compared to a provincial average of 12.5 per cent.

In the days after her career-changing revelation, Schembri came across the Women Of Steel program online. Non-profit organization CWB offers the free, one-week arc welding certificate in two southern Ontario cities, including Milton, where her parents live.

The trades had always intimidated her as much as they’d intrigued her, but as far back as high school, she can’t remember any of her female friends expressing interest.

“I saw it as removing all these barriers that were keeping me from getting into welding: the initial monetary investment, having the equipment that I need and also just the ability to walk into a classroom and say, ‘I know nothing about this, and I want to learn,’ which is really hard for me because I like to be very educated before I say or do anything.”

She signed up for the college welding techniques program within the month and is now graduating as one of two women among 11 students.

Madge Richardson, executive director of the North Superior Workforce Planning Board, said she can’t account for the region’s persistent gender gap in the trades, but added it’s affecting the earning power of women at large.

She said making child care available is the simplest path to level the playing field.

“It’s changing gradually a little too slowly for my preference, but I think primary child care is often expected to be the woman’s role,” Richardson said. “That doesn’t necessarily happen because it’s a conscious decision.

“But I think a lot of things come down to child care. Someone has to stay at home with those children, so if you’re looking at just wage earning, it may default to the woman because she’s earning less. And it’s not fair, but that’s the way it is.”

In the region’s smaller communities, the lingering gender imbalance is even starker.

Fewer than 10 women per year are taking trades apprenticeships in the Kenora and Rainy River districts out of 245 and 131 active apprenticeships, respectively. For privacy reasons, Ontario records such low figures as zero per cent.

Society ‘stuck on the pink and blue roles’

Crystal George, executive director of the Northwest Training and Adjustment Board, confirmed even those small numbers have been falling, sliding back the progress women achieved before the pandemic.

“I think the society still gets stuck on the ‘pink’ and ‘blue’ roles in the workforce,” George said. “We have Ontario entering a major natural resource and construction era that will require thousands of skilled trades workers. Ontario’s demand for skilled workers is increasing, so now is the time for our women to step forward. There are so many opportunities out there.”

Many of those opportunities involve small business contracting, but those who specialize in women’s entrepreneurship see steeper challenges for clients who take that avenue.

“Hiring a woman to be on your staff as part of your company is different from contracting a woman-owned business. That imposes a whole set of barriers to access,” said Melissa Cook, PARO’s local program manager. “There’s already an established old boys’ club that has been around for 100 years or more, and that’s particularly challenging to break down because you’re blending systemic barriers with cultural barriers.”

To shift that mindset in the next generation, every school board in the region runs internships known as the Ontario Youth Apprenticeship Program. Along with Confederation College, they’re specifically targeting females as young as Grade 7 to consider careers in the trades.

Welding apprentice Kaitlyn Baldwin will be videoconferencing with students at her old high school in Fort Frances this week as a role model for women in trades.

Baldwin discovered her career path early and graduated with a specialist high skills major diploma. She’s embarking on an apprenticeship at the nearby New Gold mine.

Now 24 and having travelled to train from Sault Ste. Marie to Emo, she’s eager to obtain stable work so she can spend more time with her two children. But she makes no apologies for focusing on her career despite all the barriers and expectations women face.

“You always get, ‘Where are your kids going? What are you doing with your kids?’ I know when I hear men at work getting apprenticeships, no one’s ever like, ‘Oh my God, how are you going to do it? Who’s taking care of your children? How could you leave them?’

“But I’m doing something that’s benefiting me and my family in the long run. Once you get your red seal, it’s something you have for life, and once you have it, you can go anywhere in Canada.”