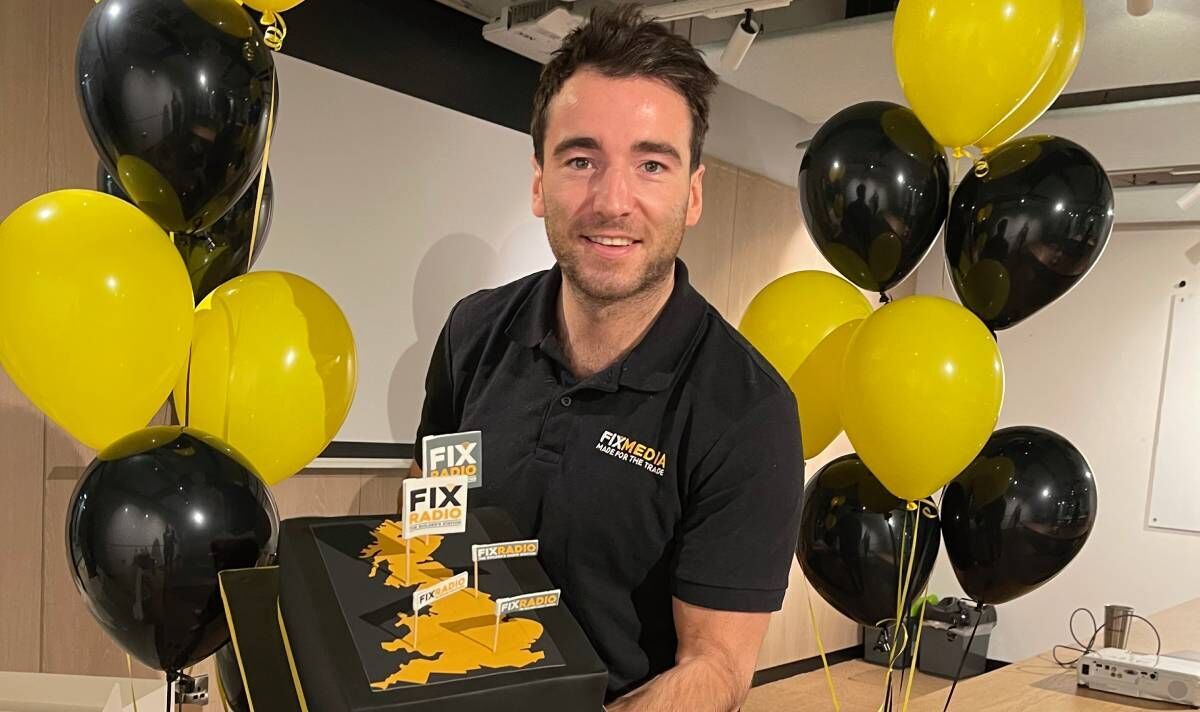 “Fix will play in its stores. It’s a dream deal raising awareness,” declares the station’s chief executive Louis Timpany.  A first time entrepreneur he launched Fix five years ago after observing how vital radio was for site workers, especially countering the isolation and monotony many experience.

Told his idea would never work, growth has proved that the demand that Timpany tuned into was spot on.

With a potential audience of 2.2 million workers, turnover is on track for £2million this year with the aim of £5million in 2024.

A platform for tradespeople, these range from builders, plumbers and electricians to plasterers, fitters, roofers, decorators and ground workers.

However Fix’s industry specific focus remains a rarity as few stations are vocational.

“We offer music, entertainment and information on site, in the van or at home every day,” Timpany explains.

“We discuss everything from sport and tools to where people are going on holiday and what they want to get paid.”

“We also campaign to raise awareness on more serious matters such as mental health problems, the impact of tool theft that can devastate a business, best practice and supply chain issues.”

“Previously we broadcast from regional DAB transmitters in London and Manchester. Now we have our national licence which has unlocked so much.”

“We can offer a far bigger reach with output all relevant to our audience so zero wastage.”

Owned by a small group of shareholders, Fix employs a team of 20 and it has taken £2.5million of investment so far to build the station that Timpany designed from the ground up.

His strategy has been two-fold, creating engaging content for the target audience matched with a cost-effective advertising solution.

“We are about how our people listen to radio,” he says. “The music offering is upbeat, full of sing-along anthems that motivate listeners.”

“But we don’t play the same songs every day and limit repeats. Our ads are premium but fewer in number to avoid monotony – the big turn off.”

“Our chat content is about 20 percent of output and informs about the best tools, technologies and practices to help them work smarter and make more money.”

“We aren’t provocative, throwing in grenades. The shows are specific – heating and plumbing, carpentry or electrical. Now we’re adding new ones like the Bald Builders, former tradesmen with a huge Facebook following.”

Listeners are 95 percent male, “but this is slowly changing,” he adds reflecting a general shift as more women enter the industries.

Fix’s website and app are also vital channels for its content and, after working remotely during the pandemic, it has recently opened a new studio in Vauxhall, south London

As well as opening up live broadcast opportunities, this allows Fix to add to its social media, creating more video content which has driven its channels to record levels this year.

“It’s the second antenna for our core business,” says Timpany. “Now our aim is a mighty push to make Fix a household name within all regions of the UK.”