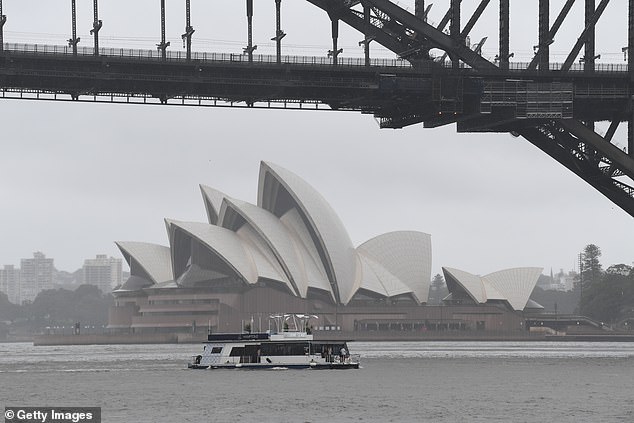 Flood-battered residents still reeling from a one in a 500-year downpour just weeks ago have once again been forced to flee their homes, as wild weather continues to batter Australia’s east coast.

Thousands were told to evacuate across low-lying areas of northern NSW and south-east Queensland on Monday night and Tuesday morning, with warnings of ‘life-threatening’ floods.

Others in the devastated region have been put on high alert amid widespread heavy rain, thunderstorms and damaging winds forecast to continue until Thursday.

Two men have now died in the deluge after being swept away by raging waters.

Heavy rain is also hitting Sydney on Tuesday morning, with the grey, dreary conditions expected to last over the weekend.

Heavy rain is battering Sydney on Tuesday morning with the grey, dreary conditions expected to last over the weekend 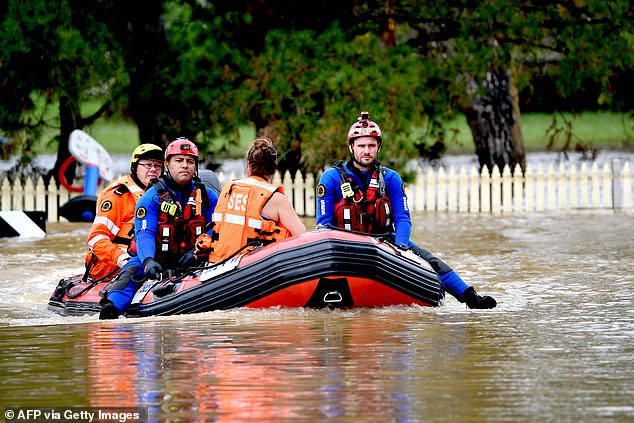 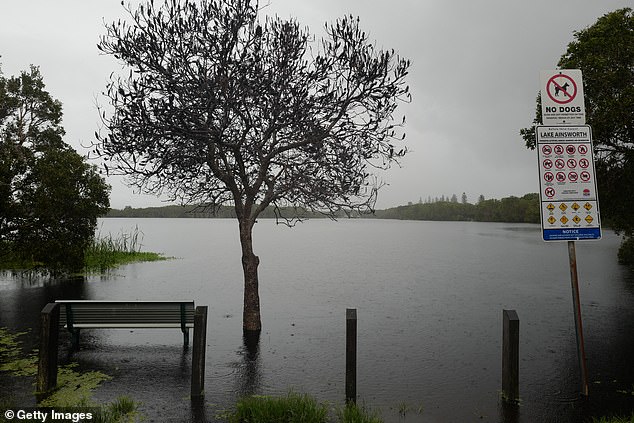 A picnic table beside Lake Ainsworth is submerged by heavy rain on March 28, 2022 in Lennox Head, Australia

Residents in parts of north and south Lismore and low-lying parts of Kyogle in northern NSW got an early-morning knock on the door from Australian Defence Force troops from the 7th Battalion, Royal Australian Regiment, telling them it was too dangerous to stay with the Wilson River surging.

Meanwhile, locals under threat in the Northern Rivers town of Billinudgel, as well as parts of Mullumbimby and Tumbulgum were also told to evacuate early on Tuesday.

‘Obviously everybody is exhausted. We’ve had a month of clean-up,’ Mr Krieg told the ABC.

Hundreds are now gathering in reopened evacuation centres across the region as Byron Council’s Infrastructure Services director Phil Holloway warned of ‘potential landslides’ in some parts.

Lismore’s Southern Cross University, the Mullumbimby RSL and Murwillumbah Tafe are among the locatations housing those who have been forced to flee their homes. 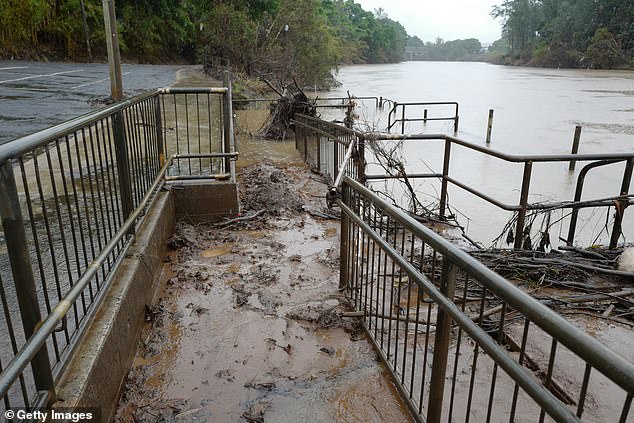 Debris piles up on stairs beside the Wilsons River on March 28, 2022 in Lismore, Australia

The damage is being done by a low pressure system sitting off the NSW coast will bring showers in the coming days including to Sydney, the Bureau of Meteorology’s Jonathan How said.

‘As the system moves south it will become windy across the state’s eastern coastline, becoming strongest on Friday with the potential to bring down trees and power lines, he said.

‘Thankfully though, this rain event won’t be quite as long-lasting as the previous rain event so we will see conditions really ease towards the latter part of the week.’

But he warned although the rains will stop, flooding may continue for days if not weeks to come.

The La Nina weather pattern is drenching Australia’s east coast for the second year in a row.

‘We’re definitely seeing the change in global weather patterns because of climate change,’ she told AAP. 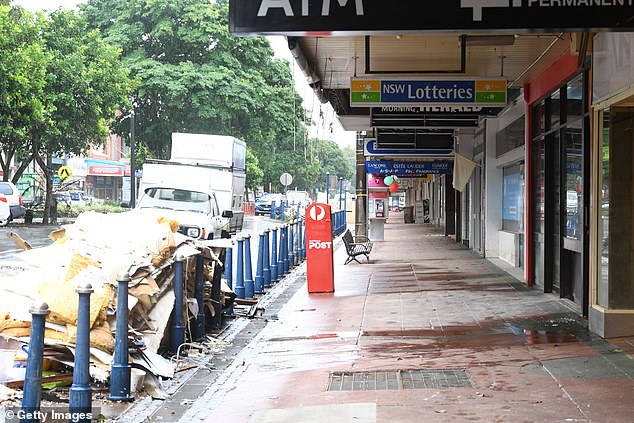 Debris sits piled up outside businesses affected by the recent floods in the main town on March 28, 2022 in Lismore, Australia 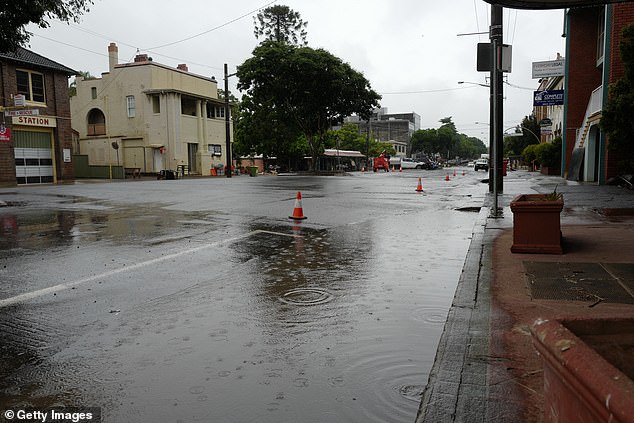 Rainfall creates puddles in the main town on March 28, 2022 in Lismore, Australia 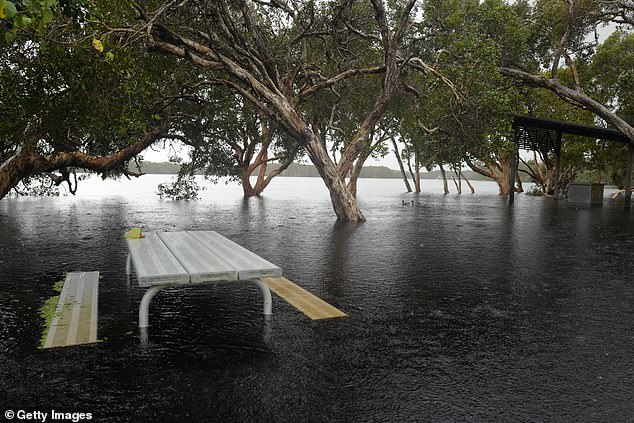 A picnic table beside Lake Ainsworth is submerged by heavy rain on March 28, 2022 in Lennox Head, Australia

Further north, intense rainfall and flooding hit parts of southeast Queensland with residents in the town of Dalby on alert as the search continues for a missing man, feared dead.

One man near Toowoomba has already died in floodwaters caused by the intense weather system, as authorities keep a close eye on the town 200 kilometres west of Brisbane, Premier Annastacia Palaszczuk says.

Another man in his 40s was swept away after getting out of his car when it became stuck in a torrent at North Branch about 6am on Monday.

Queensland police said the man’s body was found in Spring Creek, downstream from where he disappeared, at about 9am on Tuesday.

An emergency alert was issued for residents in low-lying areas, who were told to warn their neighbours, secure belongings and prepare to move to higher ground on Monday afternoon.

The Myall Creek was expected to exceed the major flood level of 3.5 metres late on Monday, with further rises possible into Tuesday morning.

‘They’re looking at an evacuation centre at Dalby at the moment,’ Ms Palaszczuk said. 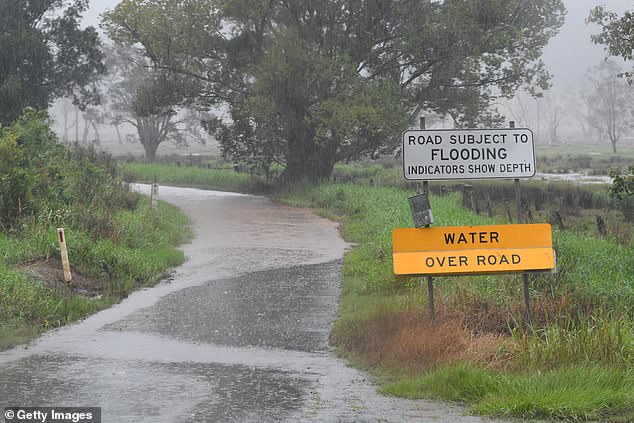 A closed road due to water over it on March 28, 2022 in Ballina, Australia 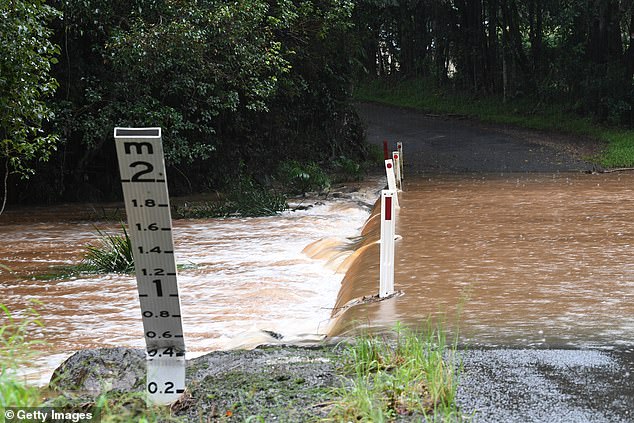 A road closed due to water over it after heavy rain at Friday Hut Road near the main village on March 28, 2022 in Tintenbar, Australia

More than 100 roads are closed due to floods, most in the Toowoomba and Darling Downs, with others in Brisbane, the Lockyer Valley and the Gold Coast.

‘Shelter in place unless it is unsafe to do so,’ it advised residents, adding that access to the area was likely to be affected.

The warning follows the death of a man and five dogs killed when their ute was washed away at Kingsthorpe, northwest of Toowoomba on Monday morning.

Swiftwater crews rescued a woman who was also in the car, but the man and the dogs didn’t survive. 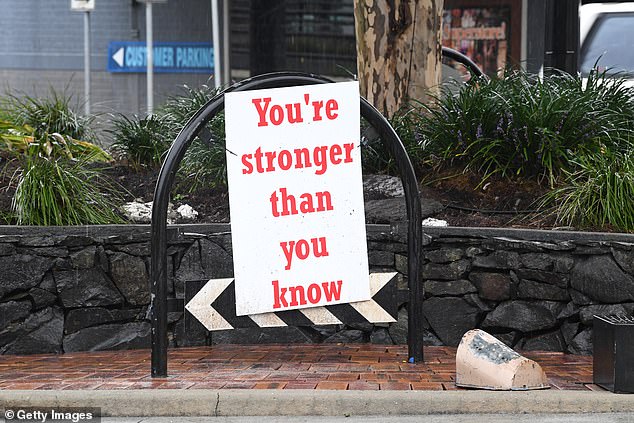 A sign declaring that the people of the town are ‘stronger than you know’ is displayed in Lismore, Australia 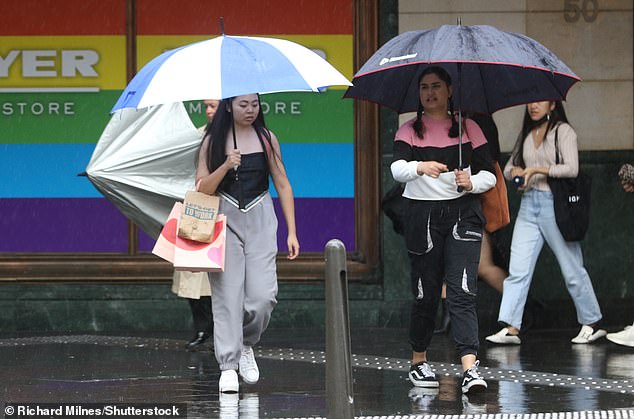