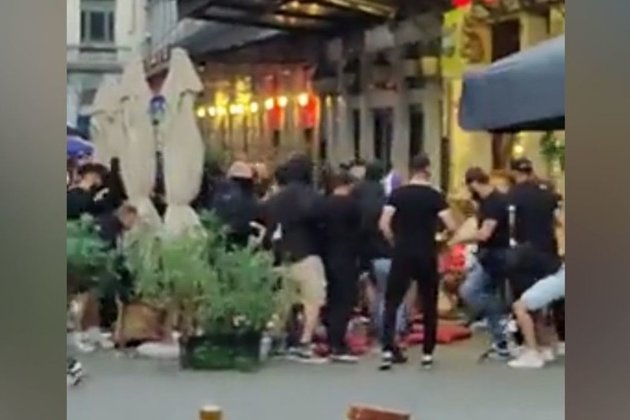 Rival football fans clashed in Brussels ahead of a UEFA Conference League game between Anderlecht and Swiss side Young Boys, in what is thought to be a retaliation attack for an incident ahead of the first leg during which around 40 supporters of the Belgian team were attacked at a bar in Bern.

A group of hooligans, many of them masked, are thought to have caused significant damage to a brasserie in the Belgian capital, with videos circulating on social media detailing the violent incident in which chairs and tables were thrown during the melee.

The incident led to 23 Swiss nationals being “administratively arrested” by local police, with some found to have been in possession of knuckle dusters ahead of what appeared to be a pre-planned confrontation.

Police also pledged to prosecute any Anderlecht supporters who were found to have broken the law.

Analysis of video footage is currently being conducted in a bid to identify any guilty parties.

“At first I thought it was a terrorist attack,” said brasserie employee Karim Khey to Euronews.

“I was very scared,” he stated, adding that the premises received significant damage and that customers have since been “scared away” by the violence.

The building’s art deco windows, which were classified as being a historical monument for more than 20 years, were almost entirely destroyed following the fracas.

A spokesperson for Brussels police elaborated that the damage was caused “following a confrontation between supporters of the two clubs”.

Philippe Close, the mayor of Brussels, arrived at the scene soon afterwards and commiserated with the owner of the brasserie, who local outlet La Dernier Heure say was in a state of shock after the attack.

Anderlecht eventually won the fixture after a penalty shootout on Thursday evening after the aggregate score was tied at one goal apiece following the two-legged fixture.