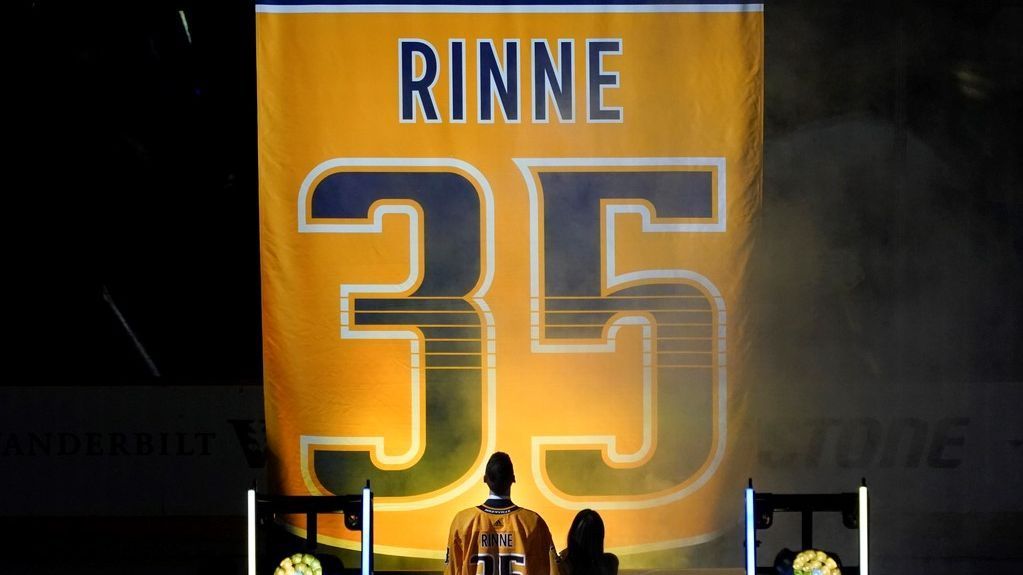 NASHVILLE, Tenn. — Pekka Rinne can’t wait to bring his 1-year-old son, Paulus, back to Nashville in a few years and share stories from his playing days.

The highlight? Pointing to his No. 35 hanging in the rafters.

“It gives me goosebumps to even think about it,” Rinne said Thursday night.

The goaltender who led the Nashville Predators to their lone Stanley Cup Final in 2017 added another first to his list of accomplishments. He became the first player to have his jersey retired by the organization in a nearly hourlong ceremony before Thursday night’s game against Dallas.

“This memory will stay with me the rest of my life,” Rinne said.

The Predators also announced Rinne will be honored with a bronze statue outside Bridgestone Arena that will be unveiled during the 2022-23 season.

Rinne emerged from the oversized Predators’ mascot head that the team skates through when it enters the ice as fans chanted, “Pekka! Pekka!” He walked past the Clarence S. Campbell Bowl, the franchise’s lone Presidents’ Trophy and his Vezina and King Clancy trophies to a stage on one blue line.

Guests included former teammates Kimmo Timonen and Shea Weber along with current captain Roman Josi, Rinne’s family and general manager David Poile. Rinne thanked the only GM he ever had and noted he had only three coaches with the Predators.

Poile said Rinne made everything he touched better, on and off the ice.

“He was someone you could look up to,” Poile said. “With No. 35 hanging in the rafters above us, he will continue to do that forever.”

Minutes after the ceremony ended, the current Predators came out wearing sweaters with Rinne’s name and number on the back for warm-ups.

Not bad for someone whose biggest hockey hopes had been to play for Finland’s national team. Rinne was selected by Nashville with pick No. 258 in the 2004 NHL draft and everything changed.

“After that, I started setting goals and dreams and started dreaming about the NHL way more,” Rinne said earlier Thursday. “Then good things started happening. Early on, I wasn’t the most talented player growing up. After that, it’s like a positive cycle start and a lot of good things happen.”

Rinne announced his retirement in July after capping his career May 10 in Nashville’s regular-season finale, a 5-0 win over Carolina.

He started that game, tying Tom Barrasso for 19th in NHL history with his 369th victory. It was his 60th career shutout.

Center Ryan Johansen pushed Rinne out for a lap around the ice after that final shutout. Johansen said Thursday he’s a fan of Rinne, too.

“I think he might be one of the most respected guys to ever play this game that will have his jersey retired,” Johansen said.

Celebrations honoring Rinne started Monday when a goat at the Nashville Zoo was named after him. Capping the festivities will be the Predators’ hosting reigning Stanley Cup champion Tampa Bay in a game Saturday at the Tennessee Titans’ Nissan Stadium.

“Going back seven, eight years, I wasn’t thinking about playing an outdoor game or having things like this happening in Nashville,” Rinne said.

Rinne is a big reason the franchise even remains in Nashville after signing a seven-year extension in 2011. The 2018 Vezina Trophy winner as the league’s best goaltender, Rinne was 369-213-75 in his career. The native of Kempele, Finland, also has the most games played, victories and shutouts by a Finnish goalie in NHL history.

“It’s pretty special, especially as a Finn,” Predators goalie Juuse Saros said of the goalie he lived with when he first arrived in Nashville. “I kind of always had a feeling this night would come, and I wanted to be here for that. It’s awesome.”

Rinne had three 40-win seasons, tied for second most in NHL history as one of seven goalies to reach that mark. He was fourth in Hart Trophy voting in 2011 after Nashville won a playoff series for the first time.