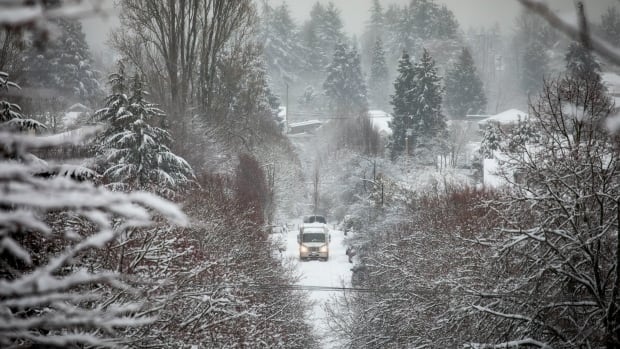 According to Environment Canada, snow will begin to transition to rain across Metro Vancouver during the morning commute as milder air moves in and temperatures begin to rise. Heavy rainfall on top of melting snow could create slippery road conditions and water pooling.

“Consider postponing non-essential travel until conditions improve,” the weather agency says in a winter storm warning issued for the region.

Up to 50 millimetres of rain is forecast to fall across Metro Vancouver by Friday morning, on top of at least 20 centimetres of snow that fell across the region late Wednesday into Thursday morning.

Freezing rain is also expected to pelt Vancouver Island, where roads have already been slick with black ice and snow for days.

Through the morning, snow will change to freezing rain over inland areas including Port Alberni, Lake Cowichan and also for the Malahat Highway. There is also a risk of freezing rain for east Vancouver Island and Victoria, where almost 30 centimetres of snow fell.

B.C. Transit suspended most of its bus routes through the Greater Victoria area Thursday morning. Updates will be posted on the B.C. Transit alerts page.

Airports in Vancouver and Victoria were reporting early delays and telling travellers to check with their airlines, while B.C. Ferries scrubbed its first departures of the day from Swartz Bay and Duke Point, plus return sailings from Tsawwassen, when snow kept crews from reaching the terminals on time.

The weather conditions have forced most school districts and university campuses on the South Coast to cancel classes Thursday.

This includes most Vancouver Island schools from Victoria to Campbell River, as well as those in Metro Vancouver including Simon Fraser University, the University of B.C. and the Justice Institute of B.C.

Canada Post has announced it is suspending mail service in the City of Vancouver, the Fraser Valley and on Vancouver Island until weather conditions improve. If customers have questions regarding mail delivery, they can contact Canada Post’s Customer Service team at 1-866-607-6301.

Power outages are also currently plaguing the South Coast, with B.C. Hydro crews working to restore electricity for over 20,000 customers Thursday morning, primarily on Vancouver Island and the Gulf Islands.

Elsewhere in B.C., extreme cold continues to pose life-threatening risks to anyone exposed to the elements.

On the North Coast, including the communities of Stewart, Terrace, Kitimat, Gitwinksihlkw and Bella Coola, the wind chill could make temperatures feel between -20 C and -35 C.

In the Peace River region, it could drop to -40 C and in Dease Lake and Fort Nelson, it could feel like -45 C.

Environment Canada is warning people to watch for cold-related symptoms including: shortness of breath, chest pain, muscle pain and weakness, numbness and colour change in fingers and toes.

“Cover up. Frostbite can develop within minutes on exposed skin, especially with wind chill,” it warns.

Temperatures are not as extreme in the province’s southern Interior, but snowfall warnings have been issued for much of that region, with up to 40 centimetres expected for the Coquihalla Highway.

Heavy snow in the Interior is expected to taper to flurries Thursday morning and then turn heavy again over the Fraser Canyon and Boston Bar later this afternoon, and over the Shuswap area and north Okanagan this evening.

For a list of shelters, including women-only and family shelters where people experiencing homelessness can get out of the cold, visit B.C. Housing.