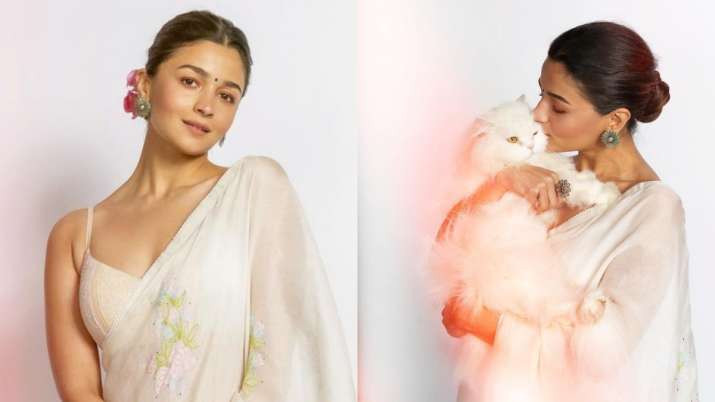 Blinking like a ray of sunshine, actress Alia Bhatt treated fans to drop-dead gorgeous pictures of herself while promoting her upcoming magnum opus ‘Gangubai Kathiawadi’. Seems like Alia is twinning with her cat, who on Wednesday, joined the actress her for the promotions. Continuing with yet another white saree look, Alia has sure made fans ‘stop and stare’ at her drop-dead pictures shared on her Instagram handle. In the series of photos, the 28-year-old actress could be seen posing for the camera while donning a floral embellished pearl white saree, reminiscent of her character Gangubai, who wears a white saree in the film’s recently-released trailer.

The ‘Raazi’ actress chose to wear a striped blouse adorned with sequined and thread embroidery. Skipping a neckpiece, the diva complemented her look with minimal accessories that included a statement ring and silver colour ear studs. She tied her hair in a clean middle-parted bun, decorated with two pink roses.

Alia chose minimal makeup on her radiant skin. She donned a dewy base make-up, a light pink lip shade, a green bindi, and a hint of blush on the cheeks. Her first picture featured her kissing her white furry feline friend- Edward. “Edward Bhai Aur Gangubai. #GangubaiKathiawadi in cinemas 25th February,” Alia captioned the post.

For the unversed, ‘Gangubai Kathiawadi’, directed by Sanjay Leela Bhansali, also stars Ajay Devgn in a pivotal role. The period drama has been adapted from one of the chapters of noted author Hussain Zaidi’s book, ‘Mafia Queens of Mumbai’ and features Alia in the lead role of Gangubai, one of the most powerful, loved and respected madams from Kamathipura during the 1960s. Apart from ‘Gangubai Kathiawadi’, Alia’s future projects include ‘Rocky Aur Rani Ki Prem Kahani’, ‘Darlings’, ‘RRR’ and ‘Brahmastra’.