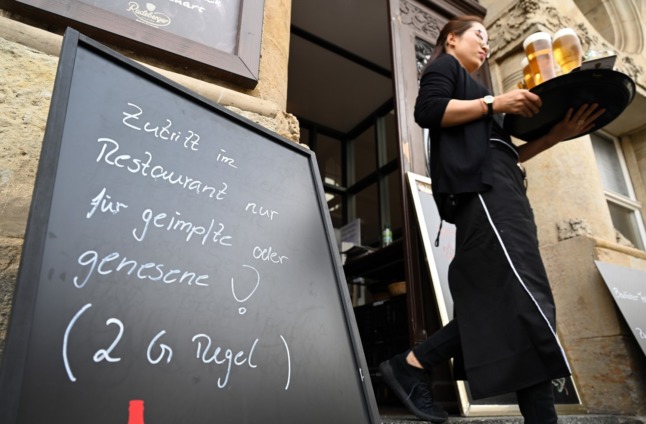 “If no new virus variant emerges that vaccination does not protect against, which is very unlikely, then we will have overcome the pandemic in the spring and can return to normality,” the CDU politician told the Augsburger Allgemeine newspaper.

Spahn said that herd immunity “is always achieved” in the long run. However, the question is whether it happens through vaccination or the spread of the virus.

“Vaccination is definitely the safer way to get there,” Spahn said.

The Health Minister urged people eligible for vaccination to go and get their jabs.

“Anyone who does not get vaccinated is very likely to fall ill,” the minister said, warning against underestimating the risks of infection in light of the current drop in infection figures.

But experts have been warning that there was also a lull at this time last year before the autumn/winter surge hit.

“We also had a ‘breather’ at this time of year last year,” said Spahn. “So we’re not through yet. In the autumn and winter, when we’re all indoors a lot more again and the immune system is less strong, the risk of getting infected also goes up.”

Spahn attributed the current decline in infection numbers primarily to the end of the vacation season and stricter testing rules.

The Health Minister also defended plans to end financial compensation for unvaccinated people who have to miss work if ordered into a quarantine.

READ ALSO: What employees in Germany should know about quarantine compensation

He said this was “not about pressure, but about fairness towards the vaccinated”.

“Why should others pay for the fact that someone decides for himself not to be vaccinated?” the CDU politician said on broadcaster ZDF’s Morgenmagazin on Wednesday.

The health ministers of the federal and state governments plan to discuss a unified approach on Wednesday.

Spahn also spoke out in favour of a nationwide regulation for the so-called 2G option – i.e. the possibility of businesses only allowing vaccinated and recovered people to attend events or dine indoors in Germany. He said he would campaign for this in the consultations with the state health ministers.

Currently Germany has a 3G approach where people who’ve been vaccinated (geimpft), recovered (genesen) or tested (getestet) can enter indoor public spaces. Some states – such as Berlin, Hamburg and Hesse, have moved to allowing businesses to choose the 2G model.