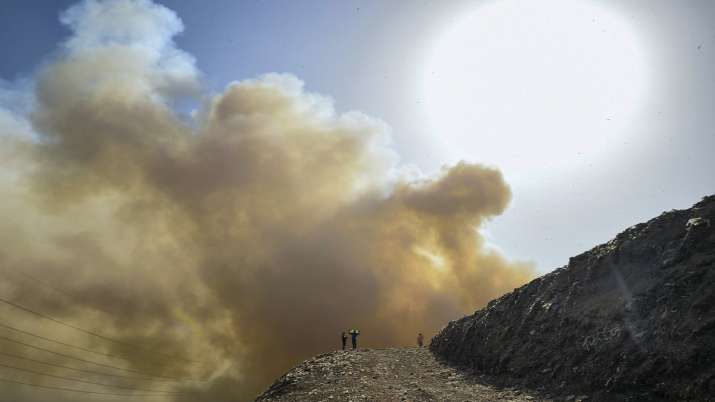 The East Delhi Municipal Corporation (EDMC) is in the process of floating a tender for processing of 50 lakh MT waste from the Ghazipur landfill dump, which it plans to remediate by 2024, senior officials said on Monday.

A massive fire broke out at the dumping yard in east Delhi on Monday, leading to a huge cloud of smoke enveloping the region and its neighbouring areas.

EDMC standing committee chairman Beer Singh Panwar said the fire was caused due to “high temperatures” as plastic is one of the major components of the legacy waste and methane keeps getting generated.

“I visited the site myself after the incident and took stock of the situation. Besides fire tenders at the site, we have deployed 22 bulldozers to help in the process of dousing the flames. By tonight, the situation should be totally under control,” he said.

The giant mound is planned to be remediated by 2024, Panwar said. The EDMC is in the process of floating a tender for processing 50 lakh MT waste from it, he added. No casualty has been reported in the fire, an official of the fire department said, adding that nine fire tenders are at the spot.

Meanwhile, AAP councillor and Leader of Opposition in the BJP-led EDMC Manoj Kumar Tyagi issued a statement saying such incidents keep happening even after spending crores of rupees on the landfill site.

Twenty-six trommel machines and other equipment are being used to manage the dump, but this incident shows there is “large-scale corruption” in the civic body, he alleged. “The ruling party is shying away from a probe into this,” Tyagi charged. The BJP in Delhi denied the allegations levelled by the AAP.

ALSO READ | Ghazipur bomb scare: Delhi Police recovers bike in which IED may have been transported to market