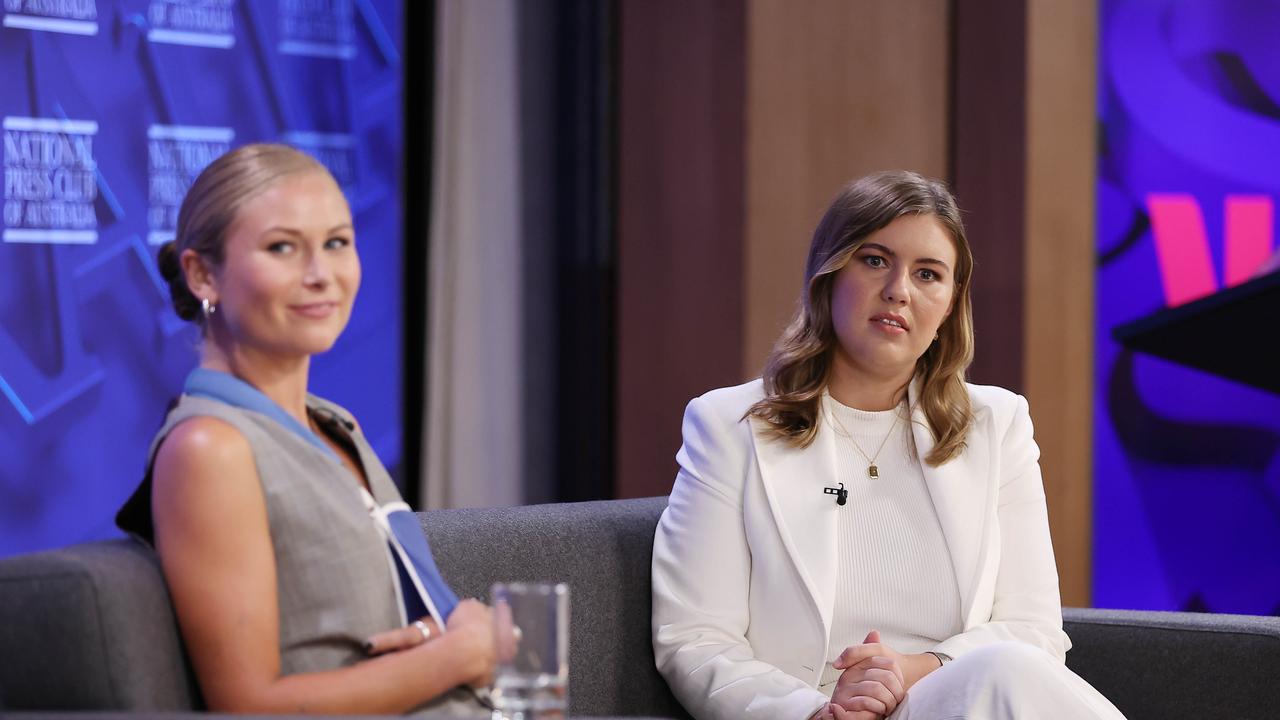 There was one thing missing when Brittany Higgins and Grace Tame delivered powerful speeches to the National Press Club today.

The sold-out crowd at Brittany Higgins and Grace Tame National Press Club address on Wednesday might have been primarily women, but both survivors have called for men to help fight the “common enemy”.

Ms Higgins, a former Liberal staffer, and Ms Tame, the former Australian of the Year, delivered powerful speeches about their individual experiences with sexual assault and child sex abuse.

Both women used their time to call on the government to enact real change rather than “empty announcements, placatory platitudes, superficial last-minute acknowledgements and carefully staged photo ops”.

They called for concrete actions that would make a meaningful impact on society.

Taking note of the lack of male presence in the room, one reporter noted that of the 22 journalists at the working press table there was only one man.

The two women were asked: “Is this a sign that sexual abuse is seen as a fringe issue by the men on our community?”

Ms Tame, who repeatedly pointed out how different her experience of child sex abuse was to Ms Higgins’ experience of alleged sexual assault, called on those fighting against gender-based abuse and harassment to focus on the common enemy.

“Early on, when I was finding my voice, and actually before I had a public voice, it was men who I was relating to first,” Ms Tame said.

“It was the stories of males surviving clergy abuse who I was relating to before I even spoke to any woman who were abused as children.

“It was all men who had been groomed I spoke to.”

Ms Tame said she had not heard of a woman being groomed until she entered the public space, and found it difficult how “gendered” the space surrounding abuse and assault was.

“I think it is actually quite sad,” she said.

“The fighting and the hatred that I see really distresses me because it’s not about that (gender). It’s about human beings and, if we take away whatever the form of division is, whether it is gender or whatever it may be, it is about abuse of power, and that is what we have to remember.

“Men are not the enemy. It is abuse of power. It is behaviour that is the enemy.”

Ms Higgins paid tribute to the “incredible” female journalists who she said “spearheaded the story this entire year” but that men needed to help carry the burden.

“There has been a perception to an extent that it is a women’s issue and it should be, whether it is a sensitivity thing, I am not saying it is entirely out of place of them not particularly caring about the issue, but it is a conversation they don’t feel comfortable participating in,” Ms Higgins said.

“But I think it is very telling, just the numbers in the room and who seems to care about the issue, or at least be vocal about caring about the issue.”

Channel 7’s Rob Scott, the only male journalist at the working press table, took an opportunity to ask both women what advice they would give women looking to pursue a career in politics and whether the Liberal Party needed to introduce gender quotas.

“Quotas is like a dirty word to the Liberal Party. I don’t know how you cross that bridge, but I genuinely think it would make a significant difference,” Ms Higgins said.

“There’s an obsession on merit-based selection to the point where it’s sort of detrimental and counterintuitive and we’re shutting out women from the conversation, and I don’t how you can rectify that.

“It’s just so ingrained. But there definitely needs to be more young women in politics.”