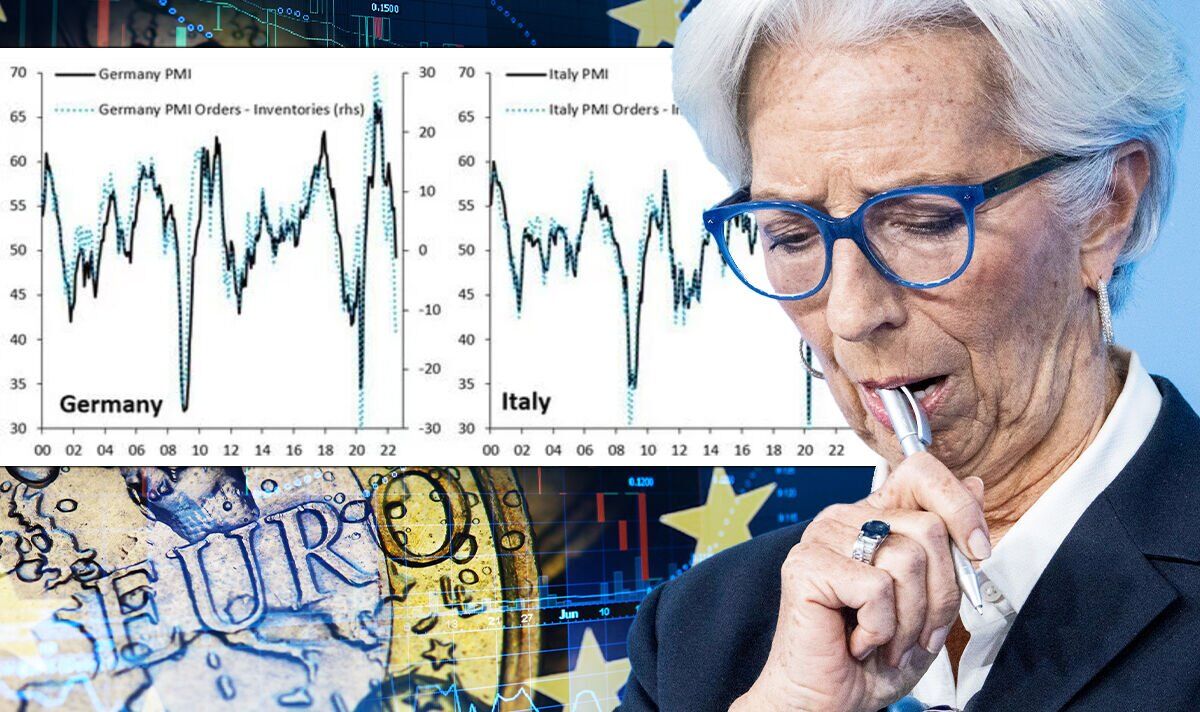 World governments have faced successive crises which have put immense pressure on their economies, as inflation soars and the cost of living crisis threatens consumer spending. Whereas many – including the Eurozone and the UK – intervened to prevent a recession on a grand scale during the pandemic, this help is being withdrawn just as the effects of the invasion of Ukraine begin to be felt.

Now, analysts suggest that many key economic markers are returning to where they were during the 2008 financial crash.

Robin Brooks, chief economist for the Institute of International Finance and a former Goldman Sachs strategist, noted the Purchasing Managers’ Index (PMI) for two of Europe’s largest economies, Germany and Italy, is already beginning to show signs of recession.

The index – which shows market conditions as positively expanding or negatively contracting – has not dropped to its 2008 levels for either economy, but has slumped below 50 since the start of the year.

Anything above 50 on the scale from zero to a hundred represents an expansion in production, whereas anything below marks a contraction – suggesting both powerhouse economies are already contracting in terms of their manufacturing output.

However, the new orders minus inventories metric – which reflects manufacturing activity through expected demand and supply – has already dropped to -10 percent for Italy and even lower for Germany.

As such, it seems their manufacturing supply is currently outstripping demand – a likely effect of rising inflation as consumers look to spend less.

Mr Brooks said this downward trend was “already as bad as in the 2008 crisis, and these data don’t yet reflect the current spike in energy prices” which are expected to put immense pressure on consumers and industry alike.

Germany in particular may fare worse: much of its economy remains heavy industry manufacturing which tends to consume a lot of natural gas, and which would usually be supplied from Russia.

Part of this may be attributed to the need to look elsewhere for energy supply, but the trend downwards before the war even began suggests shrinking productivity was only exacerbated by the invasion of Ukraine.

Another sign of the looming recession is German Government bonds recording their largest swings since the Eurozone crisis a decade ago.

According to a Financial Times analysis of Refinitiv data today (Tuesday), the yield on Germany’s 10-year bond swung 0.1 percent in 79 days, which has not occurred regularly since the debt crisis.

Antoine Bouvet, a senior rates strategist at ING bank, told the paper: “Market conditions are impaired in the bond markets. Everyone has the same view so no one’s willing to take the other side.”

The volatility of the German bond market is a sign of degrading trading conditions, with many traders holding their breath over potential further interest rate rises by the European Central Bank.

But the market also now lacks the safety net of the federal bank guaranteeing bond-buying for constituent Governments, as it drops its asset and bond purchasing schemes set up during the pandemic to allow for borrowing.

Italian bonds are also said to be fluctuating significantly, and the spread between them and German 10-year bonds grew to near 2.3 percent on Monday.